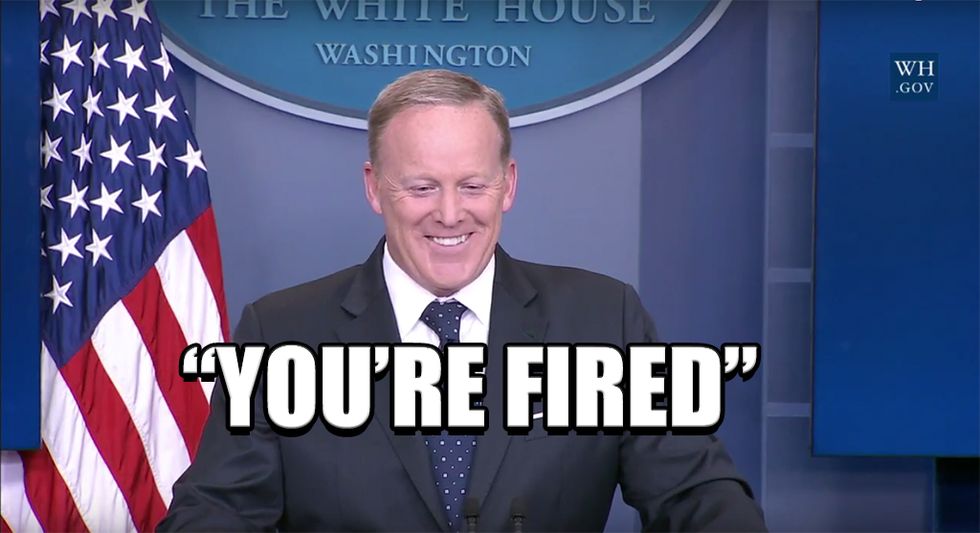 Good Whiskey Wednesday, Wonketariat! Here's some of the things we may be talking about today.

After closing a 20 point gap, Jon Ossoff lost the special election to Karen Handel, and now Republicans are running around screaming about the death of progressive politics, but at least we can kick Karen Handel for the next year and a half.

Robert Mueller's team is picking up all sort of interesting folks for its justice league of extraordinary investigators. [MORNING MADDOW!]

Even though EVERYONE knew Mike Flynn was crooked and compromised as early as January, CIA Director Mike Pompeo continued to give Flynn classified material because reasons.

Jeff Sessions has lawyered up, just because, you know? He's not at all worried, he...uh...just wants everyone to know he has a good lawyer. Yep. Nothing weird about that

Mitch McConnell is rushing like a turtle out of hell to ram through TrumpCare, but he is promising to release a "draft" version of super secret zombie TrumpCare tomorrow. SURE he will...

A number of Republican senators are pissed that nobody knows what's in super secret zombie TrumpCare bill, but WALNUTZ John McCain thinks we should just ask Russia what's in the Senate's double-secret healthcare repeal bill.

The Senate Intel Committee will talk to the heads of the FBI and DHS, along with state election officials today about securing our electronic election systems now we know foreign governments can screw around with voter rolls, just like Republicans.

Hey remember when they told us the vote totals weren't changed? Yeah, they never audited them.

Chuck Grassley wants to investigate Hillary Clinton's murderous email sex servers (again!) because a conservative blog says she screwed up the handling of classified information. Maybe, if she'd given it to fucking Russians, it wouldn't be a problem.

Trump's pick to head day to day ops at the Pentagon was not well received by the Senate Armed Services Committee yesterday as a grumpy old John McCain yelled about his youth, and his ignorance to the hostilities in Ukraine (which is code for Russia).

Two psychologists contracted by the CIA to create the infamous torture program are saying that they initially had reservations about torturingenhanced interrogations techniques being used by the CIA, but they were told to grow a spine, and forced-fed bullshit about dirty bombs.

Trump wants to slash regulations on prescription drugs in order to lower prices, according to a leaked draft, instead of actually enacting real policy. SURPRISE!

Trump's White House isn't denying that it's attempting to kill press briefings, and because answering questions is just so hard, he wants reporters to submit questions in writing.

Ajit Pai addressed the Senate Appropriations Committee on Financial Services and General Government to explain a 5.2% budget reduction even though Pai has made the FCC a miserable place to work, and is doing nothing to protect consumers.

Department of Veterans Affairs Accountability and Whistleblower Protection Act will see cuts and new rules that will not allow federal employees to appeal firings, suspensions and demotions to the Merit Systems Protection Board. THIS IS A BAD OMEN because it takes power away from workers and allows brass to just "You're Fired" the employees who are, in the words of David Shulkin, "dead wood."

Jeff Sessions has announced 12 cities that will receive more federal help to fight rising violence, except Chicago and Baltimore, the two cities with some of the most serious problems, aren't on that list. Thanks, fucker.

As temperatures in Arizona reach 120 degrees Fahrenheit, forcing the flight delays and orders to stay indoors, inmates at Tent City, the Maricopa County Sheriff's Office outdoor jail, are still milling around in the heat in pink socks and sandals.

Trump once again embarrassed the United States during a state meeting with Ukrainian President Petro Poroshenko. It's just "Ukraine," it's a country, not a thing, there's no "the" in its name, and it just happens to occupied by the Russian military.

A European subsidiary of the The American Center for Law and Justice, the bible-thumping law firm headed by Trump's shitty, sputtering lawyer Jay Sekulow, has been instrumental in Vladimir Putin's anti-gay campaign according to the ACLJ's tax filings.

Chris Christie doesn't care that his poll numbers are in the shitter, but we do because we like making fun of Chris Christie at every opportunity.

Trump's team is giving him more rallies to keep him from throwing temper tantrums on Twitter and making an ass out of himself because being surrounded by people who like him makes him happy.

The ulta arch conservative faux-news network that was going to give Bill O'Reilly a new show has pulled its offer after O'Reilly didn't return their calls, and I'm not sure which is more pathetic.

Uber CEO Travis Kalanick has resigned because shareholders were PISSED about a wave of sexual harassment complaints, intellectual property theft, and its attempts to use software to avoid a law enforcement. And people think bicycles are bad?

Tomi Lahren is attempting to remain culturally relevant and interesting, telling a bunch of young people that it's tough being a pretty face spewing bile when all your colleagues want to play grab-ass.

Trevor Noah had some serious thoughts about being a black guy in America in the wake of the Philando Castile verdict that didn't air, but you should really watch it because it's very earnest commentary.

And here's your late night wrap-up! Seth Meyerssquashed some beef with Will Ferrell; Stephen Colbert talked about replacing Sean Spicer; and The Daily Show wants to scare Democrats to the polls.

We need your money to keep doing all the things! GIVE US MONEY! Click the thingys! DO IT NOW!