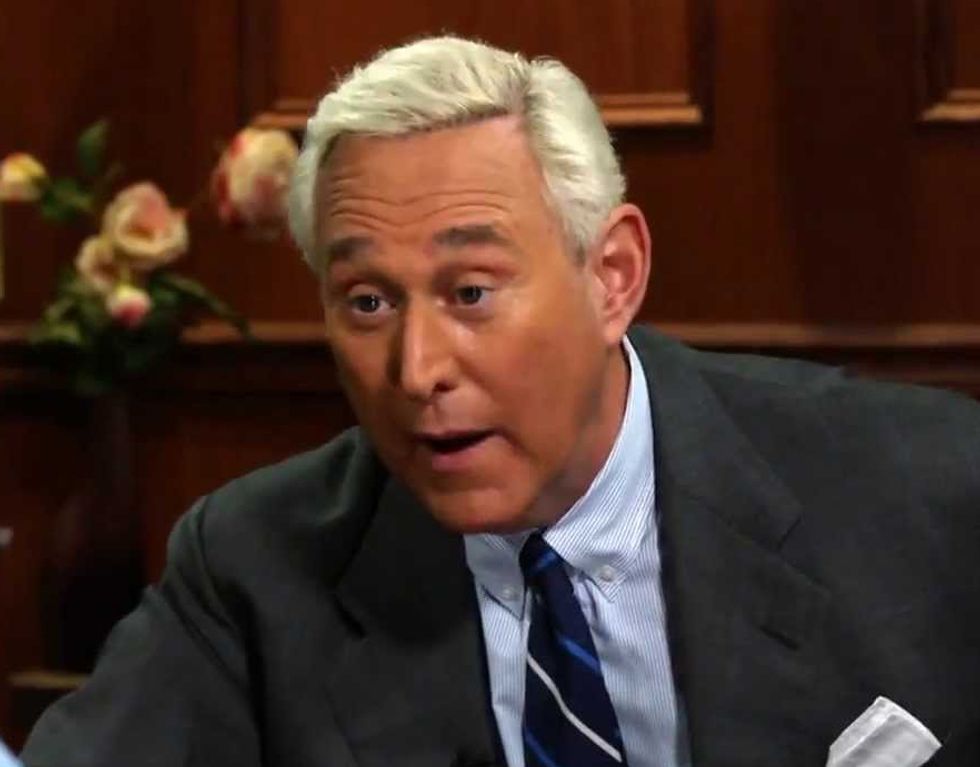 Big important follow-up story on Roger Stone! Tuesday, we talked about how special counsel Robert Mueller is taking an extry special look at longtime Trump idiot Roger Stone and his allegedly constant contacts with maybe witting/maybe unwitting Russian dipshit asset Julian Assange, who runs WikiLeaks from his hidey hole dungeon in the Ecuadorian embassy in London. The Wall Street Journal reported on an email dated August 4, 2016, between Stone and his protege Sam Nunberg, the on-again/off-again Trump adviser idiot who stole America's entire day recently when he spent hours on TV getting free drunk therapy about how he wasn't going to see Robert Mueller and YOU COULDN'T MAKE HIM! (He went to see Robert Mueller.)

In that email, Stone had reportedly said, "I dined with Julian Assange last night." But was Roger Stone being serious? Or was that just the kind of hilarious joke we have come to expect from hilarious comedians like Roger Stone? Well, Stone's head is oddly misshapen, so he could be under the impression that is a joke. Regardless, Stone swears he was just making a tease to his very good friend Sam Nunberg, that he wasn't anywhere near London the night in question, and told Trey Yingst, a reporter for the wingnut One America News Network, "At the end of the day it's not what you said you did, it's what you did." Well OK then.

Luckily, we can now see the email in question, and it reveals that both Stone and Nunberg were using HOTMAIL, oh my god what century is this? It was tweeted by Yingst, and here it is:

As you can see in that screengrab, on top of how Roger Stone's email, or one of them, is "players02@hotmail.com" and Sam Nunberg's is "snunberg@hotmail.com," the only words in the Roger Stone email in question are:

enjoy it while u can

I dined with my new pal Julian Assange last nite.

HA HA! What a good joke!

Here are some possibilities, as we see them:

Anyway, this all happened, again, on Hotmail. Legal Twitter attorney person Susan Simpson tweeted a couple times in reply to Yingst, once with a screenshot that purports to show Roger Stone using that very same Hotmail address in his lifelong quest to watch big hung black guys bang his wife, allegedly. (AKA the original Olde English definition of being a "cuck.")

Click to embiggen this ad from 2006, but don't worry, we'll transcribe it below:

Hot Cuban Pussy. Miami Lady 40-24-36 has an insatiable hunger for huge hung black Cock. She is 5'4, with huge tits, small waist, hot ass, shaved pussy, with giant clit and big floppy pussy lips. She likes it hard, deep and nasty. Obidient [sic] husband shares her cunt. You must be 22-40, lean, muscular, and hung like a horse. Hygiene and attitude count. 100% real. Contact me/us with a photo of face/body/meat.

DEEP STATE CIA ASSASSINATORS NEED NOT APPLY. Because you know how the CIA assassinates Roger Stone every few months, because he's just too dangerous. It's OK, though, he always gets better.

And yes, the email is real, and we guess he's been using it for about a thousand years. If you Google around, you can see it comes up lots of places as Roger Stone's email. And yes, Roger Stone really really really is literally into that type of sex stuff. He's admitted it.

And finally, yes, this post is fucking over now, because we are really grossed out and want to die.