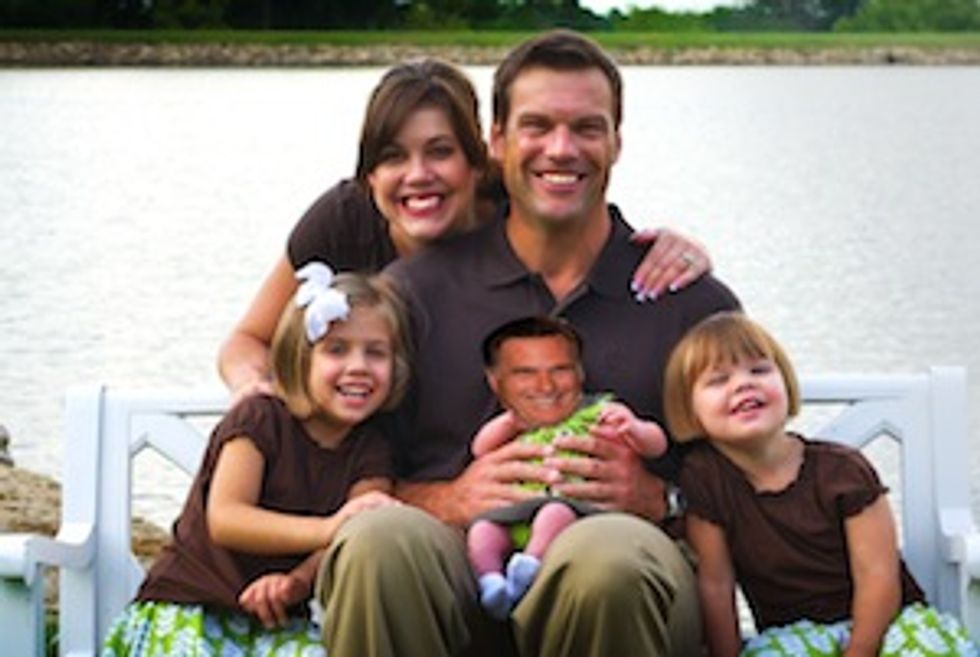 Mitt Romney releaseda Spanish-language ad in Florida Wednesday in an attempt to put a swift end to the other presidential hobbyists' efforts to prevent him from having to concede to President Obama in November. ODDLY, Romney's ad comes just as he's earned the endorsement (and endorsed the endorsement, obviously, because he has no friends) of Kris Kobach, aka the Kansas secretary of state and the architect of Arizona's awful immigration law, SB 1070, and the even stricter Alabama law HB 56. Kobach is affiliated with two really creepy organizations, the Immigration Reform Law Institute and the Federation for American Immigration Reform, and he appears to spend every waking hour trying to take down pro-immigrant laws from states as far and wide as Pennsylvania, Texas and Nebraska.

Rom-com's ad spot contains Congressman Mario Diaz-Balart uttering the words, "Romney believes in us.” Believes in. Hardly a guarantee of anything, and if his praise of Kobach is any indication, Romney would have no problem endorsing the mission of what has been recognized as a hate group by the Southern Poverty Law Center.

I’m so proud to earn Kris’s support. Kris has been a true leader on securing our borders and stopping the flow of illegal immigration into this country. We need more conservative leaders like Kris willing to stand up for the rule of law. With Kris on the team, I look forward to working with him to take forceful steps to curtail illegal immigration and to support states like South Carolina and Arizona that are stepping forward to address this problem.

Stopping the flow. Creating a Biblical deluge in the other direction. Same thing.

Just for fun, the founder of FAIR, John Tanton, said in a 1997 interview that unless U.S. borders are properly secured, America will be infiltrated by people:

defecating and creating garbage and looking for jobs.