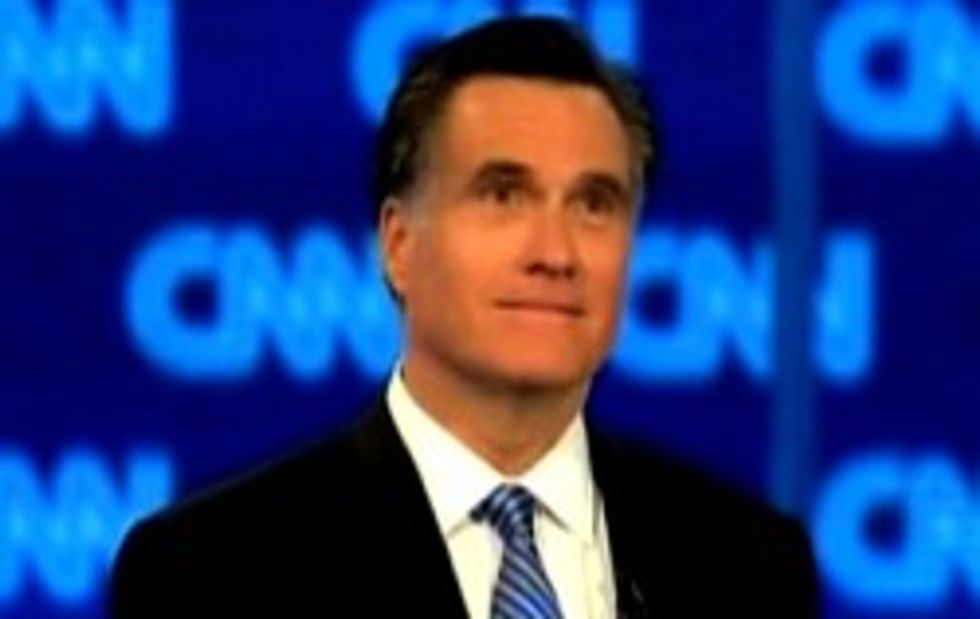 In Thursday's debate in South Carolina, the one where Gingrich soared, Romney stuttered, Paul sniggered and Santorum ... was also there ... moderator John King prodded the gentlemen with questions on tax returns, a segment that greatly overshadowed any attempt to remind people that Gingrich isn't good at monogamy. King's express interest was in trying to get Romney to either a) be bold, like his father, and release a decade or so of tax returns, b) self-destruct, or c) somehow get carried to safety by the little flapping wings of supportive South Carolinian audience members. The fun part was the contrasts that ended up getting drawn between Romney the barely-taxpayer and everybody else who pays taxes. Ron Paul said the main reason he wasn't releasing his returns is because he'd be "embarrassed" by how little income he makes. "No one's challenging me because I have no conflict of interest," Paul said. Touuuuuché.

When it came Romney's turn, the candidate said: "If I'm the nominee the President is going to want to insist that I show what my income was this last year and so forth."

This last year and so forth? DUDE. As he rambled on, however, he eventually said he would "maybe" release more years than just one. But Romney's bridezilla-like feeling that everything will go exactly as planned if he remains continually in control still shone through last night. Unfortunately, while trying to maintain control, his server overloaded.

"I'll put these out at one time," he said, "so we have one discussion of all of this." Unfortunately for him, the discussion has been going on all week, and it won't end until he releases at least a half-dozen of the damn things. If you're a rich man running for the presidency, unfortunately how you spend your money is one of the best indications of who you are.

Gingrich, who released his returns last night, was asked what he thought of Romney's answer, and once again he came off like the only candidate with half a brain. Romney can do whatever he wants, he said,

But if there's anything in there that's going to help us lose the election, we should know it before the nomination, and if there's nothing in there, why not release it? It's a very simple model.

This was just one of a couple of instances in which the debate tackled the tax return question, and in the second instance, when John King reminded Romney that his father George released 12 years worth of tax returns when he ran for president in 1967, Romney didn't do so well. In fact, he looked alarmed even when the only words out of King's mouth were "back in 1967," like, "Oh, crap, what happened in 1967?" (See figure 1 for the expression.)

Romney's argument here was that releasing his tax returns would just make it easier for the Obama campaign to destroy him, and we don't want that, South Carolina, do we? But that argument falls flat (even generating some boos), because if you're not confident that you can actually come out the other side of a political campaign, if you're not willing to put all your cards on the table, why even run? Why fool millions of Americans into thinking that you're the best candidate to tackle the President? [CNN/Talking Points Memo]