Ron Paul Is (Briefly) the Winner of the Iowa Caucus! 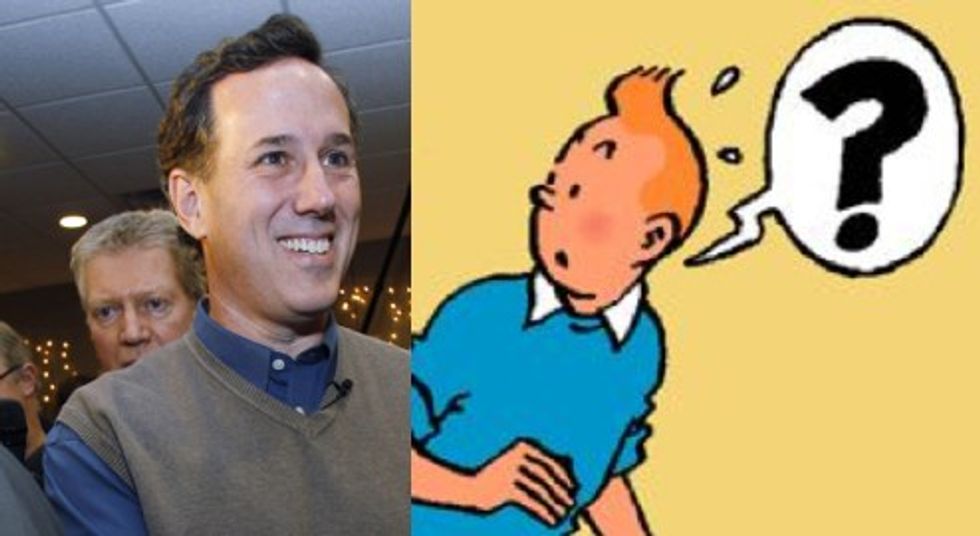 Haha, what the hell is going on in Iowa? Ron Paul is winning right now, with 15% of the Iowa Caucus Pie Socials reporting, while the disgustingly frothy Santorum Surge has sprayed all over Mitt Romney's $25,000 suit. (Don't worry, Mitt has another dozen $25,000 suits in his limo, and more in the suite, and more probably being flown in on his private jet, probably from Milan.) The people on the cable news swore that Ron Paul could only win if there was a Snowpocalypse, and yet it's relatively warm and dry in Iowa and he's still winning. It's like the Republicans suddenly decided that they're giving up on America, too. And it's about time!

What time is it, in Iowa, anyway? Time to learn about life in the President Ron Paul world, that's what! A world with no foreign oil, which means no petroleum fertilizer and no tractors and no endless miles of semi trucks and choo-choo trains carrying corn syrup and soy fillers to America's gaping maw. Maybe Iowa can return to Tall Grass Prarie, with bison and stuff! Literally anything would be better than the current Iowa, with its Saudi Arabian-fueled monocultures and high school football games on every radio station. Oh, sorry Iowa, we forgot that an Iowan hipster made a YouTube (with the F-word!) to defend the state! No more Iowa jokes, then ... not until exactly four years from now.

8:30 PM (In Iowa) -- There is big excitement, as many cable news personalities are in Iowa, just like four years ago! We have learned (again) about the quaint customs, such as "pie" and "ethanol subsidies."

8:39 PM -- Oh noes, the Washington Post twitter media person says Rachel Maddow got HOAXED by ... eh, it is too unimportant to repeat, as it involves the name "Gary Johnson."

8:45 PM -- While the networks run the usual loops of fun features they run every four years, such as "How do caucuses work," Talking Points Memo has posted alleged new results showing Mitt Romney now has a small lead over Santorum and Paul, with 31% of the pies having been eaten in middle school "multipurpose rooms."

8:47 PM -- Here is an article on The Atlantic website called "The Greatness of Ron Paul." It's not even by Andrew Sullivan! See these while you can, so you can tell your kids ("Atlas" and "Shrug") what it was like when Doctor Paul almost nearly won the Iowa caucus in 2012.

8:49 PM -- Oh, and if you're wondering "How do caucuses work," as so many watching the Iowa caucus would seem to be wondering, based on the constant video news-feature explanations, this is how they work: Sometimes when a man and woman really love each other, they have sex at night. And then there are the people of Iowa, who go to school auditoriums to listen to Ann Romney read off an iPad or whatever, and then everyone has some pie and politely talks about getting that black man out of the White House.

8:54 PM (again, in IOWA TIME) -- Only one of the GOP candidates has a tasteful home, this row house in Washington, and this is the same candidate currently at 1% in the Iowa caucus: Jon Huntsman.

9 PM IOWA TIME / 10 PM EASTERN / 7 PM PACIFIC -- MSNBC lawn gnome Chuck Todd just said NBC/MSNBC will not call it, not now, not until "all the votes are counted," whatever that may mean. So, long night ahead! Or, short night, if you just go do something else like read a book or sleep or take a bath or yell at the neighbors.

9:16 PM -- We are watching the Des Moines Register video feed, because ... we don't know? It lacks the high comedy of the MSNBC and Fox and CNN clowns. Let's paste in a picture of Rick Santorum, seen today, looking exactly like the French racist "Tin Tin."

9:22 PM -- And with 46% of the pies now consumed, it's Romney and Santorum swimming gracefully in a pool of semen at 24% each while Doctor Newsletter is at 22% and Michele Bachmann is deep into next month's pill prescription already.

9:35 PM -- The Ron Paul second surge may still come, as the college counties have yet to report. So, if everybody finished D&D and figured out where to do this caucus thing and didn't get distracted by "Second Dessert" (pies), then Ron Paul may still come in first place!