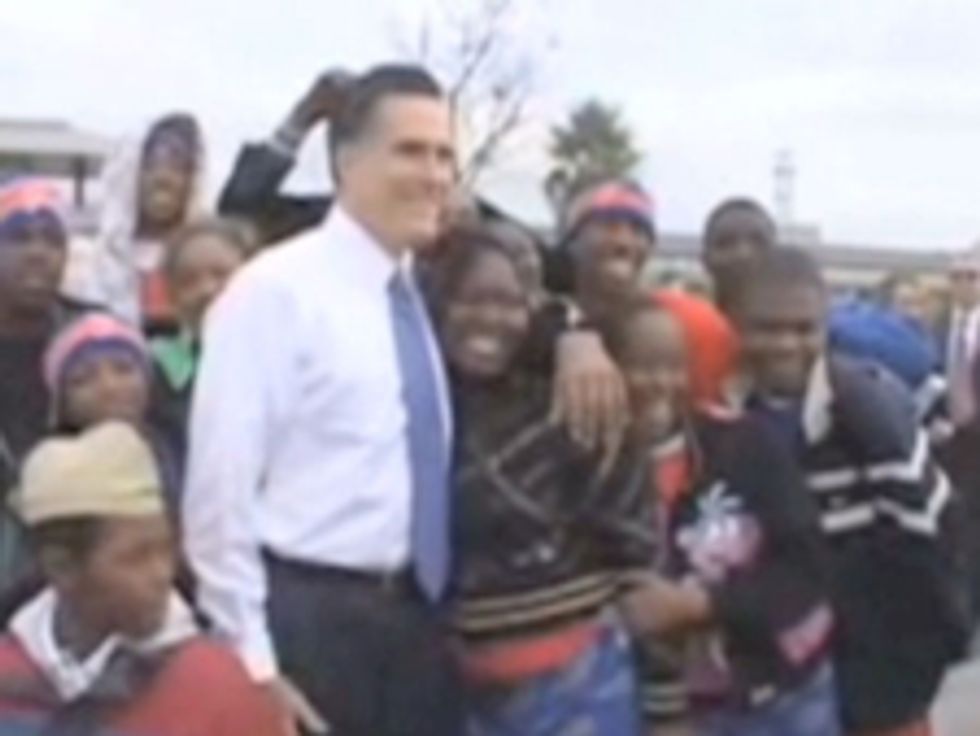 Flaccid Mitt Romney was out in Howard, Wisconsin to tell more crappy jokes to old people today when who interrupts him but a supporter of Doctor Congressman Ron Paul, a man who ran for president in 2011. He kept hollerin at Romney about the Mormon religion's attitudes regarding black people, and black people who spawn with white people. Why does, or did, Mitt Romney's church -- like all other religions for most of time -- wait so long to assume the absolute most basic, modern views on race? RON PAUL, on the other hand, has always been a champion of harmonious race relations.

ABC News has the hot scoop on how Mittbot nearly lost his temper, but instead merely settled on being curt:

Confronted in Howard, Wis., by a Ron Paul supporter about a Book of Mormon passage that says dark-skinned people were cursed, Mitt Romney used the episode as an opportunity to discuss work he did as a bishop for his church.

"I guess a lot of people say that your Mormon faith cannot be a concern in the election. But I think, it might be, as well as I found these verses from the Mormon book. Moses 7:8 says," said Bret Hatch, 28, of Green Bay, before he was cut off by a Romney aide.

"Why don't you give me a question," Romney asked. But Hatch continued: "Ok, well, in the Mormon book it says there were a blight cast on all the children of Canaan.”

Romney cut him off again. “I’m sorry," he said. "We’re just not going to have a discussion about religion in my view, but if you have a question, I’ll be happy to answer your question.”

Hatch then asked, "Do you believe it’s a sin for a white man to marry and procreate with a black?”

Romney answered with a curt: "No, next question."

What is the point of asking whether one particular religious text "says" horrible, out-of-date things? If you're religious and have a problem with what some other religion's book says, try reading a few pages of your own and consider whether you want to go down this road.