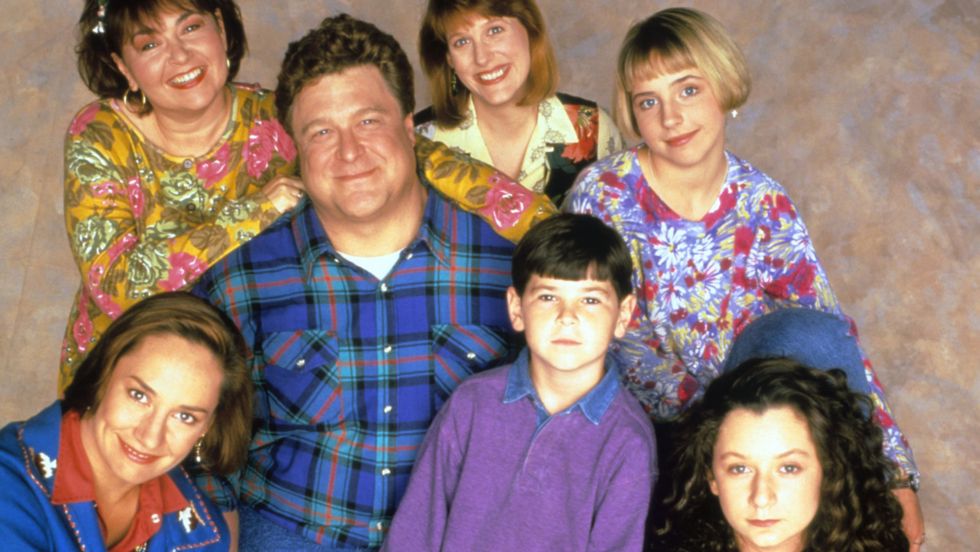 Those were the days.

ABC's strategy of giving primetime TV shows to racisttransphobicconspiracy theorists seems to have hit a snag. Late Monday night, Roseanne Barr decided to one-up Trump's awful self-congratulatory Memorial Day tweet with one that should only be read while in disinfecting reach of a Silkwood shower.

Roseanne was referring to Valerie Jarrett, an adviser to President Obama who is black and was born in Iran to American parents. This tweet was not just, you know, evil, but perhaps more troubling for ABC is that it's so off message. The original plan for the rebooted 1980s hit Roseanne was for Roseanne Connor to serve as the non-coastal-elite representation of the non-evidentiary Trump supporter. She wasn't a racist (heck, there was even a "very special episode" where she's nice to Muslims who loan her their wi-fi passwords). She had a black granddaughter and non-gender-conforming grandchild, who she didn't hide away in an attic (I'm so moved; I'm without movement). No deplorable she, her whole rationale for voting Trump, as she explained to her Strawman Hillary Supporter sister, was that he "talked about jobs" -- even though his few non-racist, non-xenophobic policy prescriptions sounded like plagiarized speeches from the Great and Powerful Oz.

This bald-as-Trump-really-is propaganda in the rough shape of a once-beloved sitcom almost worked. The revival premiere's ratings were through the roof. ABC quickly renewed the show for another season. And Roseanne even earned raves from TV critic and part-time-presidential-squatter Donald Trump.

Even so-called liberals, perhaps desperate to have something to discuss with their right-wing relatives at holiday gatherings, jumped on the bandwagon.

watched @RoseanneOnABC last night & loved it. That familiar feeling of the old but w comedy & content so totally of this moment like the angst w/in close families over politics. Hope y’all let go of needing art 2 reflect/express only what u yourself feel. That’s not what art’s 4

But this was all built on a shaky foundation. For such a scam to work long-term, Roseanne Barr would need to be a good enough actress to convincingly play "white working class Trump supporter who is totally not a racist xenophobic transphobic bigot" even when not on set. She's not. Nor did it seem like anyone at ABC tried to keep the demon in the bottle by at least taking away Roseanne's Twitter. The "suits" apparently had a "hands-off, what's the worst she could tweet" approach. How did that work out for them?

ABC has pulled the plug on the revival “Roseanne.”

“Roseanne’s Twitter statement is abhorrent, repugnant and inconsistent with our values, and we have decided to cancel her show,” ABC Entertainment president Channing Dungey said in a statement.

Disney chairman and CEO Bob Iger voiced his support for the cancellation, tweeting “There was only one thing to do here, and that was the right thing.”

Barr deleted her tweet about Jarrett not long after posting it. She followed it up with an apology which read, “I apologize to Valerie Jarrett and to all Americans. I am truly sorry for making a bad joke about her politics and her looks. I should have known better. Forgive me-my joke was in bad taste. I am now leaving Twitter.”

Why is it that everyone always announces they're leaving Twitter at the precise moment when they are guaranteed to have all the free time they want to spend on Twitter? Anyway, ABC's abrupt announcement came after consulting producer Wanda Sykes concluded no amount of Silkwood showers could remove the stench of association with Roseanne and promptly quit the series.

In describing her work on "Roseanne" to Metro Boston last month, Sykes said she typically helped the show's full-time writers "punch up stories and jokes" twice a week, a job she took on because she was "a fan of the show."

"Extreme anything is nuts. Extreme left is just as nuts as the extreme right," she said. "The only way that we're going to patch things up in this country is the people in the middle got to start talking to each other instead of just battling it out on Twitter."

I'm not sure how anyone who actually read Roseanne's Twitter feed for the past few years thought that she was interested in "patching things up" with anyone who disagrees with her. A rough review would reveal that she has a weird obsession with comparing black women to apes.

Roseanne Barr, 2018: I apologize for comparing Valerie Jarrett, a black woman, to an ape. I should have known better. Forgive me—my joke was in bad taste

Roseanne Barr, 2013: I apologize for comparing Susan Rice, a black woman, to an ape. I should have known be pic.twitter.com/P10YtYH9Sc

I get that ABC wanted to attract large numbers of the supposed "alienated by Black-ish and Modern Family" Trump voters. But they should've aligned themselves with someone who wasn't a festering pustule of bigotry or, if by some weird coincidence, they couldn't find a Trump voter who didn't fit that description, they could have at least made a deal with a stable bigot, someone who confined their bigotry to secret Eyes Wide Shut-like bigotry clubs.

Channing Dungeny, ABC's entertainment president, is the first black woman to head programming at a major broadcast network and I hope she's not thrown under the bus or used as a PR shield from this Dumpster fire. It didn't take long for anyone tangentially associated with this racist train wreck to rush to social media to try to distance themselves.

Roseanne’s recent comments about Valerie Jarrett, and so much more, are abhorrent and do not reflect the beliefs of our cast and crew or anyone associated with our show. I am disappointed in her actions to say the least.

Good try, Sara "Never-To-Be-Darlene-Again" Gilbert. Your show's name is ROSEANNE. I don't care how supposedly woke you or, I dunno, the key grip are (do they still have key grips on shows or is that all done by iPhone now?). The program you willingly associated yourself with reflects the beliefs of your lead actor, whose name is ROSEANNE. Sara "Keep-That-Paycheck-Coming-I-Gots-Bills" Gilbert also lamented the show's cancellation.

This is incredibly sad and difficult for all of us, as we’ve created a show that we believe in, are proud of, and that audiences love— one that is separate and apart from the opinions and words of one cast member.

C'mon, we all know Roseanne was saying racist shit at the table reads. No one at Two and a Half Men tried to express shock when Charlie Sheen ran around talking about "winning" and "tiger blood." They were all like, "This was our every day. Thank God it's over."

I don't mourn the loss of Roseanne. I resented its whitewashing attempts to further a myth of who voted for Trump and what motivated them. But I am pleased that Roseanne herself, through her sheer terribleness, has done more to help puncture that myth that anyone else. Although, I'm sure Roseanne has already risen as a right-wing martyr to perceived "PC zealotry." How long would it take to find someone arguing how unfair it is that Michelle Wolf still has a Netflix show when she was mean to poor Sarah Huckabee Sanders?

Oh yeah, and Roseanne tweeted some vile bigotry at George Soros too, but that's just mainstream as hell, so.