Roy Moore Being Persecuted For Loving Jesus, Not Because He Wanted To Fuck Kids 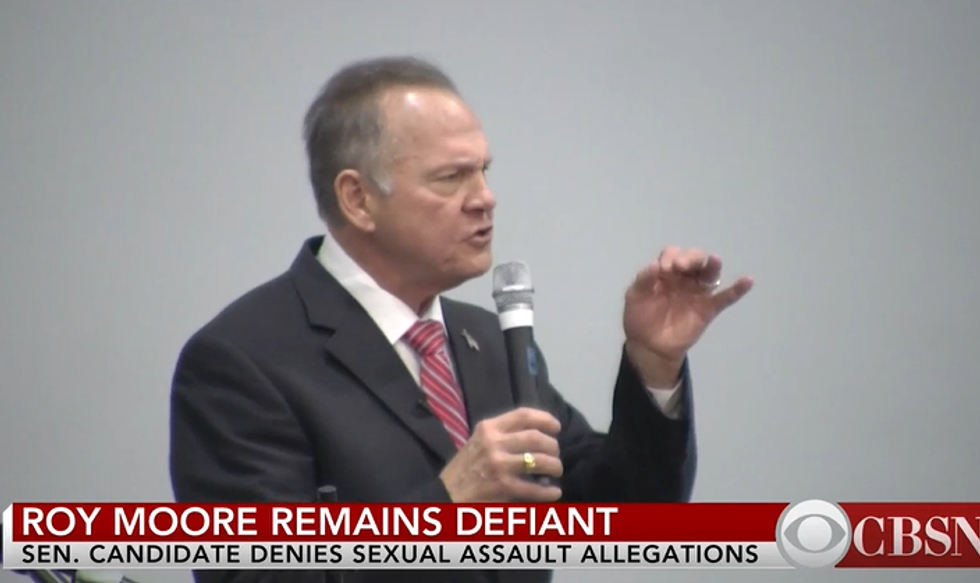 It's your Morning Roy! And gentle readers, our Roy Moore spoke at a revival event on Tuesday night, to get us back on message about the real reason for the season, which is not that Roy Moore allegedly touches kids with his meaty Alabama hooves, but that Moore and his followers are being PERSECUTED for loving the LORD. Did God not say they would be hated for loving Him so much?

We're going to need you to sit down, take out your Bible, and let Roy Moore lock your passenger side door to make sure you are paying attention to his revival message, which he delivered at the God Save America conference in Jackson, Alabama. You ready? TAKE US TO CHURCH, ROY:

In case you don't want to watch that whole thing, here are some highlights:

You get the idea.

Roy Moore is right that he's being persecuted right now. His buddy Sean Hannity said Tuesday night that EVEN HE is starting to doubt Moore's changing excuses for his alleged kid-touching, and that Moore has 24 hours to come up with a better answer to all these allegations, otherwise he needs to GTFO out of the race. When you've lost Sean Hannity, literally the most gullible motherfucker on earth -- the same Sean Hannity who ALSO went full Glenn Beck White Board pushing the hilariously made-up Hillary Clinton Uranium One scandal on the very same episode of his show -- you are fucked.

Meanwhile, Steve Bannon, who shares a lot of the blame for the fact Alabama is currently having to make a very difficult decision between an alleged child sexual abuser and Literally Atticus Finch, is leaking GRRR BIG TOUGH GUY statements to the media saying that if Moore is lying about these allegations, "I will put him in a grave myself." Oh no, Steve Bannon, don't do "AND THEN THE MURDERS BEGAN" to Roy Moore!

But yea, though Roy Moore walks through the valley of the shadow of death (checking behind trees along the way to see if there are any little girls for him to "date") he will fear no evil.

Wonkette is sends our best thoughts 'n' prayers to Roy Moore, as he experiences this time of tribulation.

Meanwhile, you are free to send your moneys to Doug Jones, because we're pretty sure God's will for Alabama isn't for this pervert to represent it in the Senate.