Roy Moore Is Broke, Hopes You Can Spare A Dime To Help Him Fight One Of His Accusers In Court 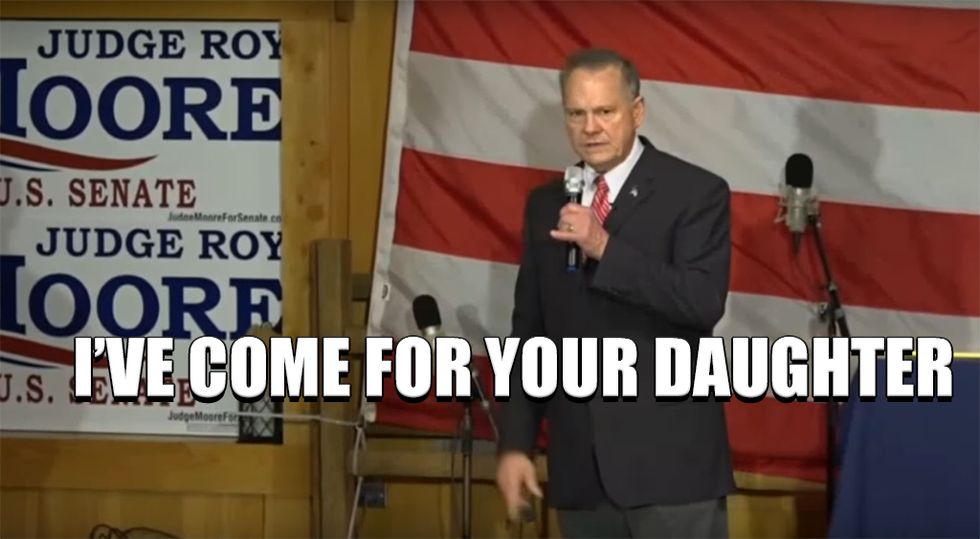 Once he built a tower, made of stone, with a big shiny ten commandments plaque right on the front of it. Once he built a tower, now it's done -- largely because of the fact that it came out that he was a sex creep who got banned from malls for hitting on teenage girls -- brother, can you spare a dime?

Roy Moore is broke, and he is begging his Facebook friends to give him some money for his legal defense fund. Moore is currently being sued by Leigh Corfman, who claims he defamed her while denying her allegations against him. He says he needs at least $100,000 to fight her in court, but is aiming for $250,000.

First, I wanted to write you to say thank you most sincerely for your support and prayers for my campaign for the U. S. Senate. Your financial contributions helped me fight over $50 million dollars from Washington insiders who did not want me to bring the truth about God and our Constitution to Washington D. C.

I have no regrets! Together we fought the good fight, we finished our course, and we have kept the faith. And we do not intend to quit! The future of our children and grandchildren is at stake.

I now face another vicious attack from lawyers in Washington D. C. and San Francisco who have hired one of the biggest firms in Birmingham Alabama to bring another legal action against me and ensure that I never fight again.

However, I will trust God that he will allow truth to prevail against the unholy forces of evil behind their attack.

No regrets, really? Not even hitting on teenage girls?

Was it really $50 million from "Washington insiders" that thwarted him or was it regular women -- at least one of whom was a lifelong Republican and Trump voter -- from Alabama that he tried to bang when they were under age that did it? Because honestly, he probably would have won the election had none of this occurred, regardless of what funding the Democrats had.

Here's the whole thing, in all its glory:

TLDR: The mean liberals in government and the media don't want a theocracy for some reason, and are trying to destroy Roy Moore in order to prevent it. He was gonna go into government and really crack down on all those gay people and "transgenders" and ban abortion and then his dreams were dashed by our dastardly plots to destroy him. With votes. He needs not "thoughts and prayers," but hard cash to fight us. Your hard cash!

He's not totally wrong here. Although we weren't the ones who forced him to creep on teenage girls, we did not want him to be a Senator. We do not want to live in a theocracy. We do not want abortion banned. We do not want people in government who are going to make life harder for our LGBTQ+ citizens. We do not want Roy Moore, period. We are allowed to not want those things! That is perfectly legal.

He's not wrong here, either. Well, not totally.

Gays, lesbians, and transgenders have joined forces with those who believe in abortion, sodomy, and destruction of all that we hold dear. Unless we stand together we will lose our Country.

Yes, we have joined forces -- though some might say that we've all pretty much been on the same side all along. But it is not "their" country to lose. It is also our country, and we can do all the sodomy we want in it (though not, Moore should know, with teenagers). We can love whoever we want (except teenagers), and we are legally allowed to have all the abortions we want. That's the law.

This part, however, is very, very wrong.

The liberal media, in association with some who want to destroy our Country do not want my influence in the 2018 elections and are doing everything they can to stop me.

Oh, Roy Moore -- that is where you are mistaken. We absolutely want your influence on the 2018 elections. Ideally, we want your "influence" on as many future elections as humanly possible. I cannot tell you how excited I am to write as many "GOP Hopeful Secures Crucial Chomo Endorsement" headlines as I can, throughout the next several years. I hope you endorse literally every single Republican candidate from now until forever. That, truly, would be a blessing unto all of us.

The site Moore is using to secure funds appears to be down, but at last count he had raised only $32K of his $250K goal -- which is still a lot of money. Help counteract that money by investing in the unholy forces of evil that seek to stop his influences on the country. Unholy forces of evil... LIKE WONKETTE!