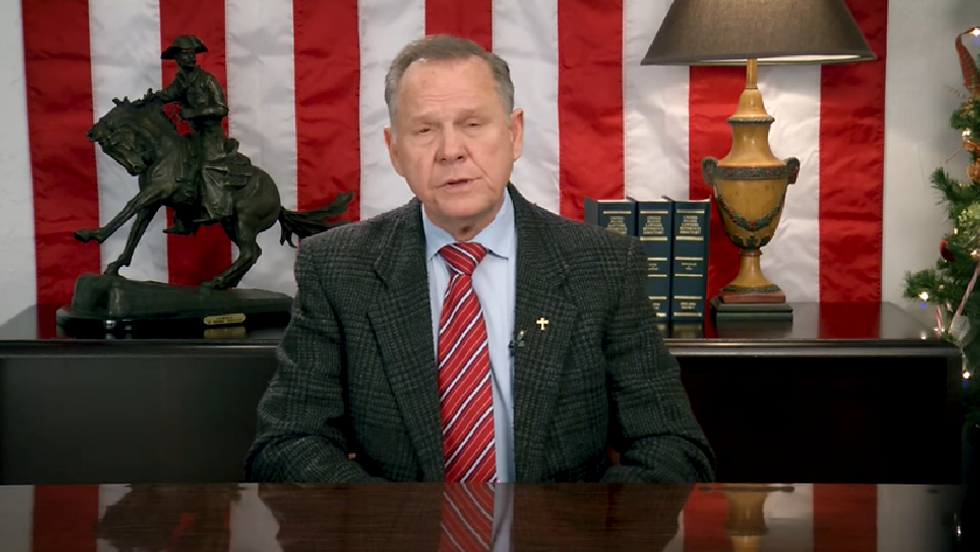 Did you really think Roy Moore would have actually conceded failure by now? Nah. Instead he released a YouTube video for his followers, to reassure them God is in control and God hates fags and God loves Roy Moore, yadda yadda yadda as Moore's Jewish lawyer might say. Moore's going to be really disappointed when God certifies the result of the election and sends Doug Jones to Washington.

Wanna watch old Roy's message to his followers, who still apparently don't mind if old Roy likes to touch kids? Shit no you don't, but here it is anyway:

Now, we will liveblog the video like it's happening live!

0:00: Roy Moore and Kayla Moore have been gay-married for 32 years. Thank you Kayla, for not divorcing Roy just because he might have fiddled with some young children under their clothes.

0:28: Something about preserving "our public, our civilization, and our religion." Because if Roy Moore doesn't go to Washington, all those things WILL BE BANNED.

0:30: Roy Moore is holding out hope the final certification will somehow miraculously declare him the winner because of "military ballots," even though he lost by eleventy percent TO A DEMOCRAT. Why does he think the brave men and women of the US military were supporting his Stranger Danger ass anyway? (Also, by the way, it would be mathematically impossible for Moore to gain the ground he needs with those ballots.)

1:54: "Abortion, sodomy and materialism have taken the place of Life, Liberty and the Pursuit of Happiness." Yep, that's the America Wonkette knows and loves! Hey, wanna gay-sex each other pregnant, get side-by-side abortions and then go shopping at a mall Roy Moore's not allowed to visit? That is Wonkette's favorite pick-up line, and it ALWAYS WORKS.

THE REST OF IT: Dunno, got bored. Good "liveblog," Wonkette!

Moore had been making noises about a recount, and the Alabama secretary of state was originally aiding and abetting that idea, except Rachel Maddow explained on her show Wednesday night that Alabama state law doesn't actually provide a mechanism for a recount in a federal race like this, where the victor won by 1.5%, or 20,715 votes, which is way higher than the 0.5% margin that would trigger an automatic recount. (And no, he can't pay for one hisself.)

Doug Jones won. Roy Moore lost. Doug Jones is favored by God. Roy Moore's God has abandoned him, and is currently having sushi with Doug Jones at the cutest little spot in Birmingham's Five Points South neighborhood. God and Doug Jones would invite Roy Moore to their victory party, but A) they don't want to, and B) where would Roy Moore park SASSY?

Time to make like an Omarosa and go the fuck away, Roy Moore. Alabama has fired you for the third and final time.