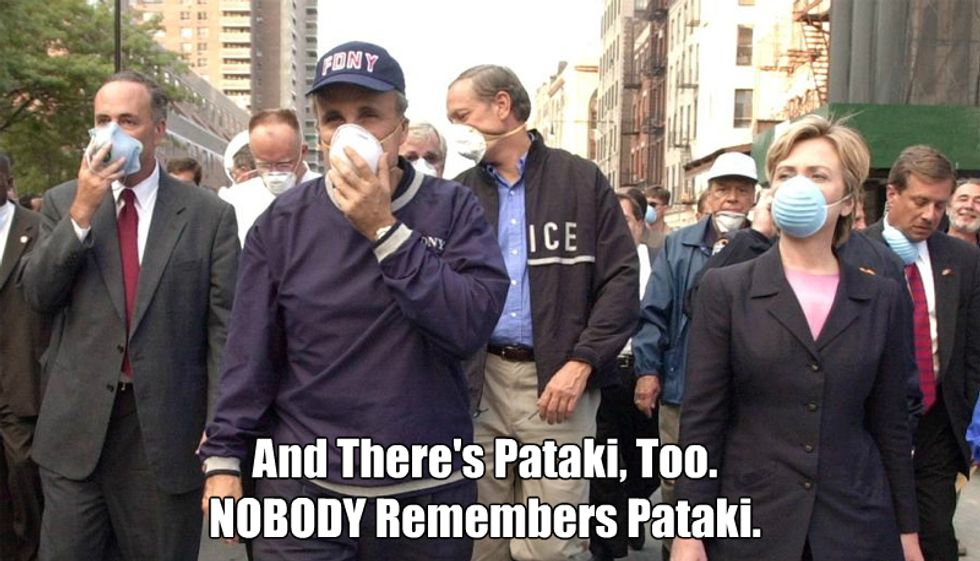 Hey Rudy, do you remember the thousands of Muslims celebrating in New Jersey?

Attention, America: Rudy Giuliani would just like to call your attention to the fact that Hillary Clinton did NOTHING on 9/11! She probably wasn't even there, or maybe she was making things worse, by being Hillary Clinton. But she has no right, no right at all, to say she remembers 9/11, merely because she happened to be New York's U.S. senator on that day, or helped get health care for first responders, or might even have stood right next to Giuliani and then-Gov. George Pataki as they visited the ruins of the World Trade Center on 9/12/2001, because he certainly didn't see her rushing into the South Tower and pulling out survivors like he didn't do either on that fateful day. Giuliani made his stirring condemnation of the do-nothing senator at a Trump rally in Ocala, Florida, Tuesday:

Don’t tell me if you said that you remember Sept. 11, 2001. I remember Sept. 11, 2001. Yes, yes, you helped to get benefits for the people who were injured that day. But I heard her say one day that she was there that day. I was there that day, I don’t remember seeing Hillary Clinton there. That was like when she said she had to run through gunfire. That turned out to be, what do we call it? A lie.

As a few hundred people noted on social media, Clinton, along with New York Gov. George Pataki and senior U.S. Sen. Charles Schumer, was photographed with Giuliani the next day at the site of the World Trade Center. But so what? That now counts for nothing, absolutely nothing, and in fact, stupid old Hillary Clinton should probably go bury her head in SHAME for failing to be in New York on 9/11. She was a whole day late to Ground Zero, where she probably went out of her way to piss on the still-buried remains of the brave heroes who sacrificed so much! What was Hillary Clinton doing on 9/11? Knitting scarves for Osama bin Laden? Says Yahoo News,

Clinton was working in Washington, D.C., when the first plane hit the World Trade Center buildings. She and her fellow New York senator, Chuck Schumer, flew back to New York the next day and saw the destruction firsthand.

Shame on her! Shame! Safe and sound in the Capitol, or at least evacuated from it, simply because it was the probable target of United Flight 93. How dare she say "I was there on 9/11," when in fact she was there in the other, far inferior city hit by the tragedy. Oh, sure, maybe she saw the smoke from the Pentagon, but that was a decidedly inferior Never Again moment. Only being in the vicinity of the WTC counts. God damn her for her filthy lies!

Giuliani appears to have become something of a 9/11 purist since July, when he actually praised Clinton for her response to 9/11:

"Hillary Clinton, like Senator Schumer, like the entire Senate and House of Representatives, like every Republican and Democrat that I know, was enormously helpful. She and Senator Schumer and [now] Senator Gillibrand and Representative Peter King were probably some of the most helpful in getting aid for the families of 9/11 victims," he said.

But you know what? Fuck her, the lying bitch. She probably laughed and drank champagne all the way from DC to NYC for that appearance on 9/12. And planned Benghazi, of course.

A little later in his introduction for Donald Trump, Giuliani had some hilarious locker-room talk for Clinton, too:

Rudy Giuliani: "Hillary, we don't want your socialized medicine. Take it and stuff it up your... I didn't say it!" pic.twitter.com/oyjY1zuxa2

Now, this may seem like a crude, adolescent thing to say during a presidential campaign. But you have to remember that Hillary Clinton deserved every bit of it for dishonoring the heroes of 9/11.