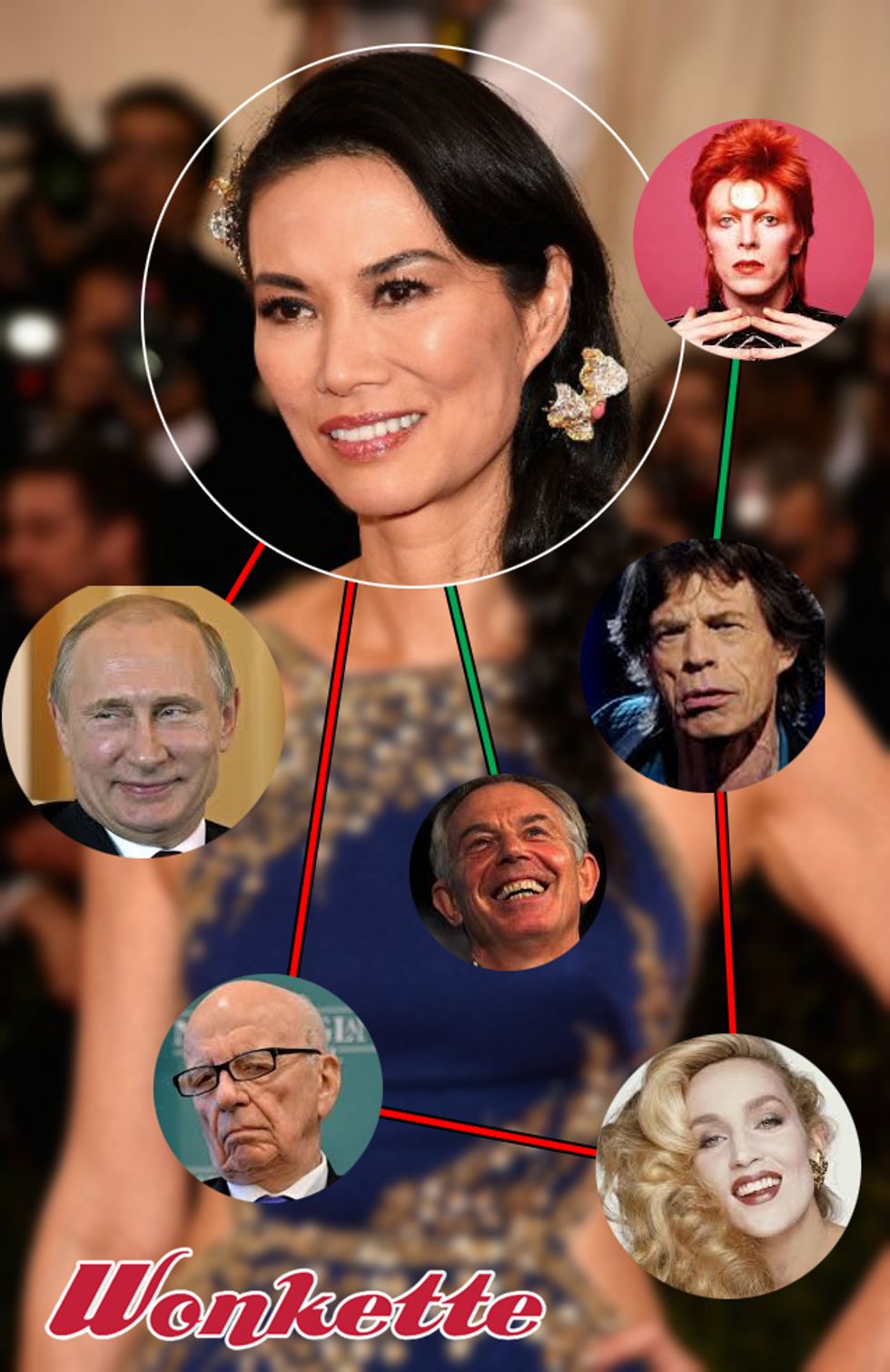 Now that shriveled sex goblin Rupert Murdoch has married Texas supermodel Jerry Hall (gross), US Weekly is matchmaking for Murdoch's ex-wife, Wendi Deng (last seen writing "Wendi + Tony Blair" on her Trapper-Keeper, her name for her vagina), and they have decided she is "Puttin'" it on Vladimir Putin! ("It" is the gluetrap in her vagina.) BEHOLD THE EVIDENCE!

Deng has yet to be spotted looking romantic with the Russian leader, but was seen boarding her pal Roman Abramovich's yacht in St. Bart’s on Monday, March 28. Abramovich also happens to be friends with Putin.

Well that was disappointing. (THAT'S WHAT SHE SAID!)

We much prefer the gross stories about Tony Blair, let's read them again!

The passionate note surfaced amid the flotsam of a shipwrecked marriage. It was written in broken English by a woman to herself, pouring out her love for a man called Tony. “Oh, shit, oh, shit,” she wrote. “Whatever why I’m so so missing Tony. Because he is so so charming and his clothes are so good. He has such good body and he has really really good legs Butt . . . And he is slim tall and good skin. Pierce blue eyes which I love. Love his eyes. Also I love his power on the stage . . . and what else and what else and what else . . . ”

The woman was Wendi Deng Murdoch, the Chinese wife of the Australian media mogul Rupert Murdoch. The note, not revealed until now, could have been one of the few pieces of evidence in their surprise divorce last year, had the case come to trial. “Tony” was the former prime minister of Great Britain, Tony Blair.

Then Wendi Deng’s vagina ate Tony Blair, and he died, the end.

Also, this one was really good too, we will let you read for yourself about her "vengeful chasm" (her vagina).

Why are we so obsessed with Wendi Deng's vagina? BECAUSE APPARENTLY IT IS MAGICAL, LIKE ROSANNA ARQUETTE'S. Now, having looked up songs about Rosanna Arquette's magic vagina I am faced with the knowledge that it is ALLEGED that in addition to Toto's "Rosanna," fuckin' "In Your Eyes" was supposed to have been written about her too.

Now this stupid post is over, and we can reflect on the fact that our lives are all lame.