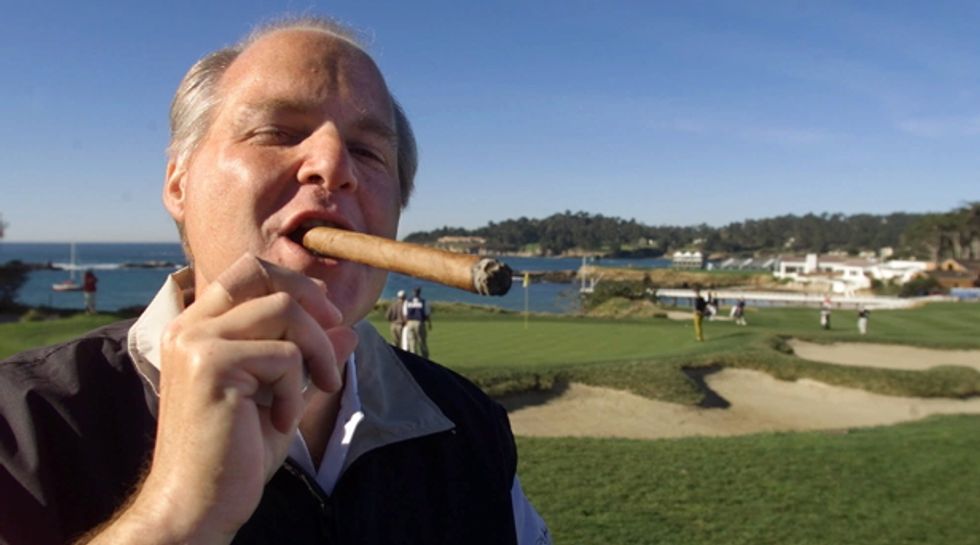 While conservatives usually love a good snowstorm because it proves global warming is a hoax and Al Gore is fat, truth-seeking climatologist Rush Limbaugh is too smart to buy into the lies of such lefty media outlets as AccuWeather and the National Weather Service. He's heard about this so-called Worst Snow Storm Ever, but he's got a brilliant question about that, which you know is brilliant because he says his own self that "it is a brilliant question." Are you ready for some brilliance? Brace yourselves: “How in the hell can a snow storm that hasn’t happened be historic?”

Oh damn, that IS a good question. And if there's one thing we know Rush Limbaugh knows more about than anyone else, it is What Is Historic. After all, he did write the ultimate biography of Rush Revere, who joined forces with The Indians to defeat socialism, and that is how we got Thanksgiving. True story!

As someone who lives in Florida, where there is no weather and certainly never any storms that do massive damage, Rush was blissfully ignoring reports about the coming blizzard that would in no way affect him, so who cares? But then:

I see this idiot mayor on TV, telling everybody this could be, might be, likely will be the absolute worst blizzard in the history of blizzards in New York. So I said, “Hmm, this sounds pretty cool.”

Yeah, that's about exactly what we'd expect Rush to think. Huge blizzard coming, could be deadly and dangerous and do tons of damage. Cool! Neat! Take that, Yankee scum!

Still, as someone who is in no way any kind of journalist, Rush felt compelled to investigate this whole "blizzard" situation. So he “dug deep” (yes, feel free to insert your suggestions for where exactly he did his deep digging) and he “got the details,” which included predictions of up to three feet of snow, plus what some people who are obviously idiots would consider standard precautionary warnings about how blizzards can be dangerous, so stay home and off the roads if you can, stock up on food and supplies, and, according to Rush, “This is the time to panic.”

“My message to New Yorkers is to prepare for something worse than we have seen before,” the mayor said on Sunday afternoon at a Sanitation Department garage near West 14th Street. “Now is the time to get ready for this extreme weather.” [...]

While saying that he was confident that city agencies would be ready to handle the storm, Mr. de Blasio emphasized the potentially hazardous nature of the snowfall and repeatedly warned those living in New York City not to underestimate it, saying: “Whatever safety precautions you take in advance of a storm take even more, be even more cautious.” He added: “Expect a lot of challenges and delays.”

Yep, that sure sounds like "EVERYONE PANIC!" But that's not even the worst of it. Because Limbaugh did even more investigating into this so-called snowstorm, by “looking at all different places that have weather websites," and you will not believe what he thinks he uncovered.

I can't tell you the number of times a record or major snow storm has been forecast -- this year alone -- I was just trying to think last night, trying to recall a couple of instances where they forecast something that is going to be really, really bad, and it hasn't even come close to being, not even close to bad, much less really, really bad. And not just in New York but elsewhere around the country. It's been a horrible, horrible year for forecasts.

And do you know why these forecasts have been so wrong? Rush knows:

And the reason is, if i can cut to the quick, the left has corrupted everything. Just like the left has corrupted the professoriate, the faculty at major institutions of higher learning, the left has populated all of these bureaucracies. The Department of Commerce runs the National Weather Service, and do not believe that they're not politicized. Look at after Hurricane Katrina, look at the very next hurricane season, global warming was responsible for Katrina and that meant Katrina was just the first many that were going to follow.

But they were all wrong, weren't they? All those liberals who insisted that Hurricane Katrina was bad, and that there would be other hurricanes that were also bad -- bunch of hoaxing liars, obviously. And Rush can prove it:

There hasn’t been a major hurricane landfall in this country in 3000 freaking days! Cat 4, Cat 5 has not happened.

"Oh yeah?" you are probably thinking to yourself. "But what about Hurricane Sandy, aka Superstorm Sandy? Wasn't that, like, a big ol' hurricane that did, like, a ton of damage?" Well, yes, smart-ass, it was and it did. But it was only a Category 3 storm, which proves it was hardly even a storm at all. And that just goes to show how all the liberals who report on "weather" and try to tell you to hey, be careful out there! are a bunch of liars. And idiots:

Well, no, that's not exactly what de Blasio and the weather services have been warning, but that's how Rush heard it, and here's what it means:

See, in a free America, no one would even need any warnings of hazardous weather conditions. They'd just look out the window and see for themselves and instinctively know, without Idiot Mayor de Blasio telling them, for example, "to avoid the city’s parks in the immediate aftermath of the storm because the weight of snow could snap tree branches and send them plunging to the ground." And if they need the liberal nanny state to tell them things like that, well, they probably deserve whatever misfortune befalls them for being idiots. But no, with the liberals infiltrating the National Weather Service, and the mayor issuing warnings to the people of his city, that's how "government ends up controlling people" with these obvious lies about historic storms that are not even historic or storms.

And that is how freedom dies, sheeple. With weather warnings.