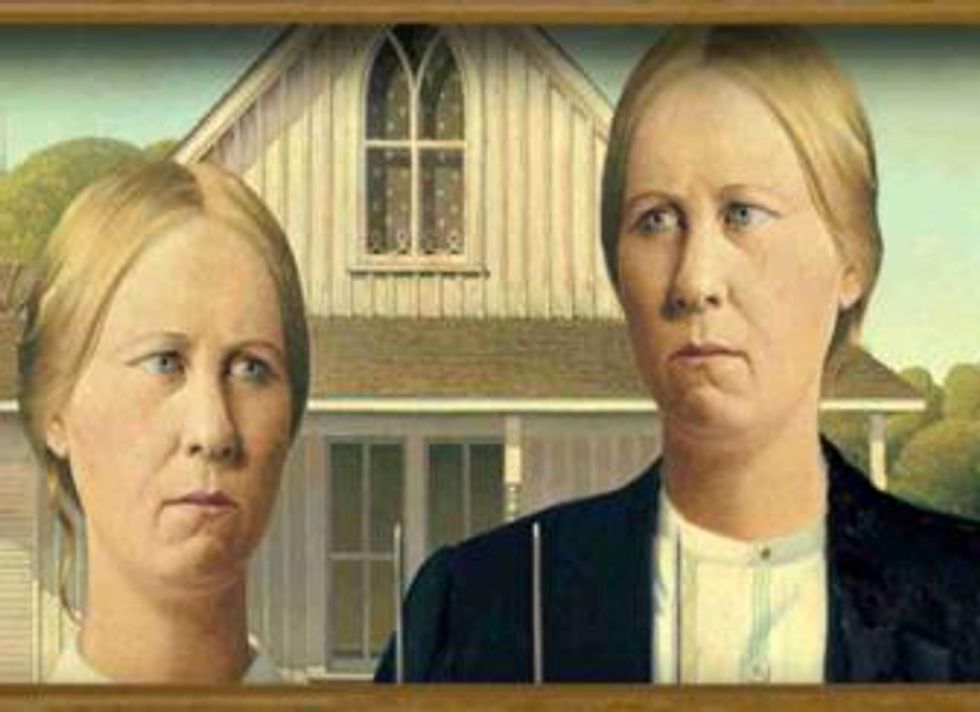 Some wingnut blog fixed it so we didn't have to.

Remember back in the day when wingnut hate radio wackaloon Bryan Fischer said he wished Michelle Obama would focus one of her health initiatives on solving the problem of beefy lesbians? Well apparently Michelle's husband Bamz heard the call, so he invented a secret program to get those ladies moving, specifically on farms! Yes, Rush Limbaugh has revealed an Obama conspiracy, and it focuses on the LGBT Rural Summit, a big gay hootenanny thrown by the Department of Agriculture and the National Center For Lesbian Rights (NCLR), to support LGBT families living in rural areas. Sounds harmless enough, right? That's because you're not Rush Limbaugh, hallucinating because the Oxycontin ran out probably and his Dominican houseboy has been playing hard-to-get, allegedly.

[wonkbar]<a href="http://wonkette.com/559054/bryan-fischer-wishes-michelle-obama-would-do-something-about-all-these-husky-lesbians"></a>[/wonkbar]Rush explained that this is all part of President Obama's master plan to magically turn lesbians into farmers, so they can destroy rural, conservative America from the inside out, as they scream Melissa Etheridge songs at the top of their lungs through the aisles of the Home Depot, while they are buying all the things they need for their farms. How does this Free Farms For Lezzies clandestine program work, Rush?

Have you heard the latest Democrat scam? Have you heard about the Agriculture Department's financial grants to lesbian farmers? You think I'm making this up?

No, we think the thing we said about hallucinations and the houseboy not putting out, but that's just us.

But what the point of this is, folks, it's not about lesbian farmers. What they're trying to do is convince lesbians to become farmers.

Every lesbian has recently had the experience where secret operatives from the government bang on their doors at night while they're bumping beans, and when they open the front door, there are just a bunch of chickens and cows holding signs that say "If you were a farmer, we would be your chickens and cows right now." Works every time.

You sit in there and laugh. OK, go ahead and laugh at it ...

... but I'm telling you what they're doing. They are trying to bust up one of the last geographic conservative regions in the country, and that's rural America.

Rural America happens to be largely conservative. Rural America is made up of self-reliant, rugged individual types. They happen to be big believers in the Second Amendment.

And we are to believe somehow that lesbian farmers would not be self-reliant, rugged individuals who like to shoot guns in the air? It's like Rush Limbaugh has never encountered a Southern lesbian in the wild, that idiot.

So here comes the Obama regime with a bunch of federal money and they're waving it around, and all you gotta do to get it is be a lesbian and want to be a farmer and they'll set you up.

That's the weird part of when the G-men visit the lesbians in the middle of the night. They check the garage for U-hauls and Subarus and make the girls kiss in front of them, and then they have to recite the lyrics to the Indigo Girls song "Closer To Fine," backwards. Only once they're verified can they get their free lesbian plow money.

Anyway, Rush says first the libtards attacked the suburbs and made them gay, and now they are doing it to the poor farmers, and oh boy, this is just terrible.

Media Matters has collected a round-up of wingnuts latching onto this conspiracy theory, and you can read all of it if you want. As for Wonkette, we feel the need to go buy a bunch of farmer flannel overalls for every lesbian we have ever met HAHAHAHA JUST KIDDING WHY WOULD WE BUY THEM SOMETHING THEY ALREADY OWN ONE THOUSAND OF?

(We kid lesbians, because we are a gay man, and we love them, not like some of those gay men. Anyway, the lesbians WE know can take a joke.)