Rush Limbaugh's 'Under The Sea' Salad Has Jello, Stuffed Olives, And Miracle Whip, No Oxycodone 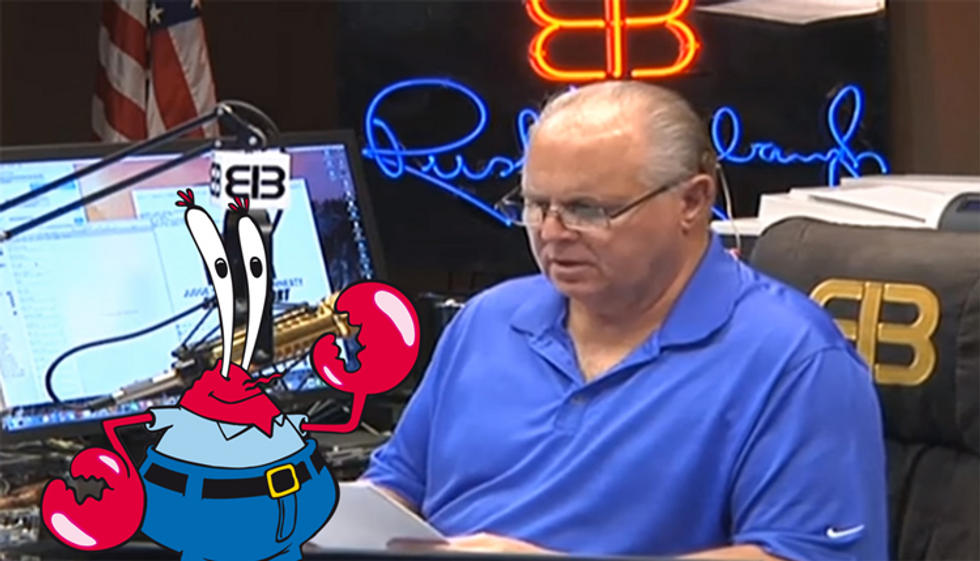 What, wrong cartoon crab? Look who's getting all picky.

The Ghost of Recipes Past has scanned our archives and found this thing, which had previously run in July 2012. It is more Jell-O, for people who find Mamie Eisenhower a tad intimidating.

OK, sure, we made fun of Rush Limbaugh for putting saccharine in his hot cocoa recipe and frying a chicken in Crisco. But were we being fair? Not really. We finally saw The Help last night, and according to Minnie, not only will Crisco soften your elbows but it is the Platonic Ideal for frying chicken. That thing was like a 2 hour and 30 minute Crisco commercial, with racism! We will buy a jar immediately! BUT. Did you happen to notice that thing above? It is a recipe from Rush's mom, as also discovered by the Crap Archivist, in "Recipes from Old Cape Girardieu."

That, Wonkados, is what a young Rush Limbaugh ate for a treat: jello with pineapple and stuffed olives. AND MIRACLE WHIP ON TOP. Not Cool Whip -- that lovely fake whipped cream in a tub -- but Miracle Whip, the mayonnaise blended with salad dressing.

And now we know who is to blame for Rush Limbaugh turning out that way.