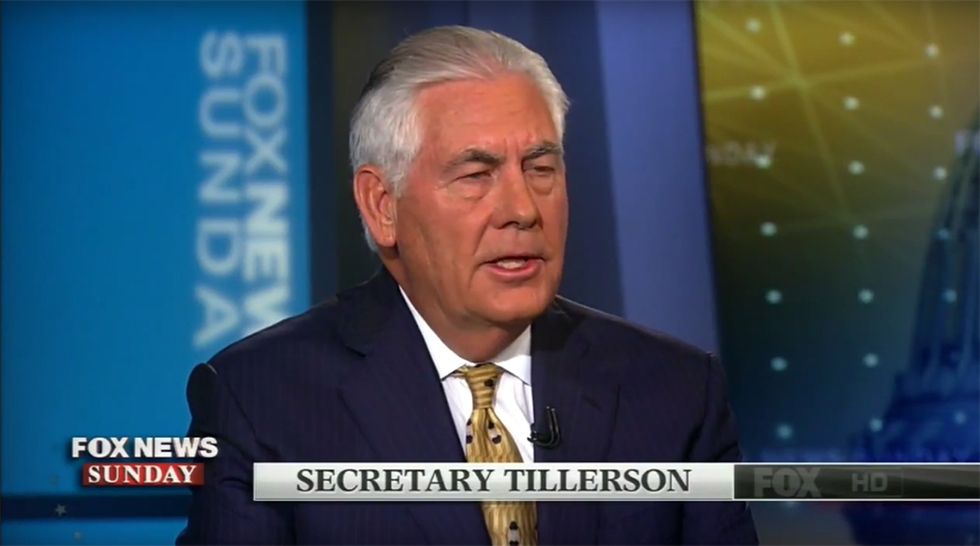 Morning Wonketariat! EVERYTHING IS BREAKING.

HOLY SHIT -- Trump just You're Fired REXXON, and is putting Mike Pompeo in his place, and Gina Haspel will head the CIA.

British Prime Minister Theresa May told Parliament that it was "highly likely" Moscow was behind the poisoning of a former spy, warning Russia that if there was no "credible response" by the end of Tuesday, the UK would consider this to be a "unlawful use of force," potentially triggering a response from NATO allies. In a rare move of Russian criticism, REXXON stated that the US stood "in solidarity" with the UK. This morning, Russia is denying the allegations, essentially telling the UK to piss off. Shame Trump can't fire Theresa May.

House Republicans decided to kill their Trump-Russia investigation, concluding that Russia DID screw around in the 2016 election, but Trump & Co. had nothing to do with it. Texas Republican Rep. Mike Conaway further suggested that the Russian attack was actually intended to help Hillary Clinton. Rep. Adam Schiff said, "history will judge [Republican] actions harshly."

Last night on CNN, Republican Rep. Tom Rooney griped to Erin Burnett that the investigation had "gone completely off the rails," and "lost all credibility."

In a new interview, Deputy AG Rod Rosenstein says he sees no reason to "You're Fired" Robert Mueller's team for investigating Russian fuckery and possible obstruction of justice, adding, "I believe much of the criticism will fall by the wayside when people reflect on this era and the Department of Justice."

David Corn and Michael Isikoff were on Rachel Maddow to talk about their new Trump-Russia book, and noted that people noticed A LOT of sketchy shit early in the campaign. Also worth mentioning: it's 50-50 if the pee hooker tape is real. [Morning Maddow]

Someone (definitely not Sam Nunberg) has told WaPo that Roger Stone was talking to Wikileaks about sliming Hillary Clinton during the 2016 election, despite Stone's and Wikileaks' repeated denials.

Speaking of Sam Nunberg, Ari Melber let him back on TV last night to talk about all the fun he had last Monday. [Video]

Mike Pence went on Hannity to nail himself to a cross and bitch about Joy Behar saying mean things about his blind religious zealotry.

As another spending deadline looms, a number of congressional Democrats are rolling over for Republicans while leaders bitch about another trillion dollar "omnibus" funding bill before March 23.

Even though Equifax lost highly personal information on half of the country, AND executives profited from that loss, the Senate's new banking bill will protect credit agencies like Equifax from lawsuits on free credit monitoring, and allow them to expand into the housing market. Thanks, dicks.

Mitch McConnell is retreating into his shell, a signal that any attempt to block Trump's tariffs will be met with a full-throated "Meh."

The PR guy for ICE in San Francisco has quit, after he was asked to report false information about a series of raids in Northern California, telling the San Francisco Chronicle, "I’ve never been in a situation when I’ve been asked to ignore the facts because it was more convenient. It was my first time being asked to do that."

A law to make it easier to "You're Fired" federal workers for screwing up the VA has had the opposite effect as civil servants are being purged for minor infractions.

A new government-wide survey has found that federal workers are much happier and more productive when they don't have to show up to the office, but the Office of Personnel Management is downplaying the report because they hate fun.

Trump looks like a big, fat hypocritical pussy after bowing to the NRA and agreeing to put a gun in every classroom, but some congress critters are telling reporters that the NRA fever dream is never going to happen.

Marco Rubio sank to a new career low when he babbled his way through an interview on gun control with Jake Paul, a Youtube star and gun fetishist best known for taking a bath in Icy Hot. Rubio, that's not going to keep the teens from dunking on you, dude.

The NRA has been using iconic works of art from major cities in attack ads without permission, and there isn't a lawyer willing to sue the NRA for copyright infringement.

While Republicans nervously watch Pennsylvania today, Trump is headed to California to look at prototypes for his stupid wall meant to keep out all the "bad hombres" from "shithole countries," and Californians couldn't be more excited to see President Puss-Grab.

Everyone seems to be getting ready for Trump's talk with North Korea, except Trump and North Korea.

Steve Bannon has been running around Europe encouraging all the racists to come out of the basement, even appearing with Marine Le Pen and telling a bloodthirsty crowd of racist xenophobes that they should wear their fascist pride on their sleeves.

Syrian opposition forces have asked the UN Security Council to uphold a ceasefire, and to use force if necessary, adding that countries should consider measures outside the council if Russia continues to screw around.

If you're planning your summer vacay you'll find a lot of cheap flights, but make sure to read the fine print as "basic economy" flights are a new scam being pushed by major carriers.

Space nerds are poring over data on astronaut twins Scott and Mark Kelly, after the former's year in space showed some genetic changes. Absolutely fascinating.

We're 100% ad-free and reader-supported, and we need your help and money to keep fighting the good fight!