Ryan Zinke Says He's A Geologist, Is Full Of Schist. 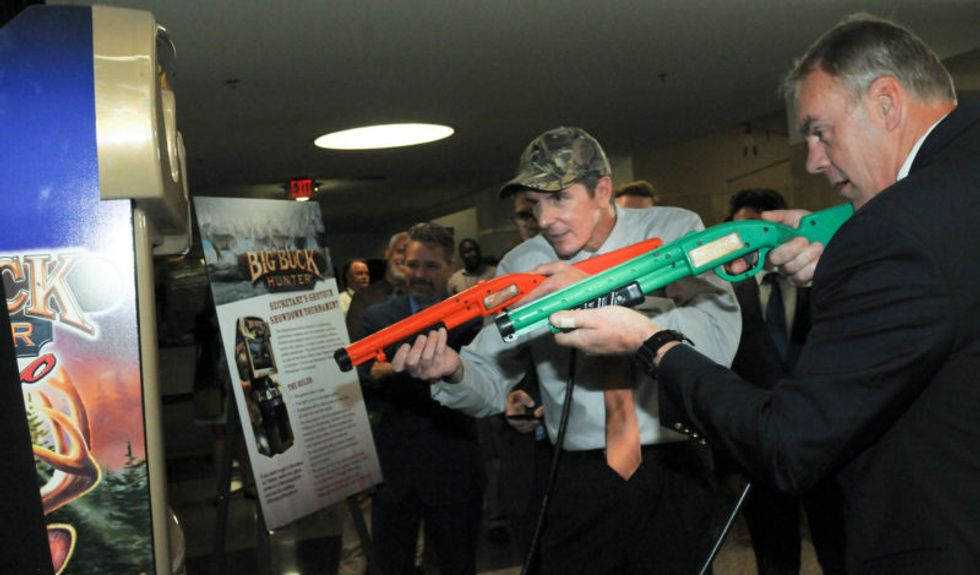 For as long as we've known of him (that would be 2015, when he floated the idea of replacing John Boehner as Speaker of the House), Commander Ryan Zinke has been fond of self-aggrandizement, like especially his insistence on calling himself "Commander," which we're pretty sure annoyed Yr Editrix from the moment she arrived (pregnant!) in Montana and found out he was the state's sole US Representative. What a puffed-up twit!

But at least Zinke really was a Navy SEAL, and some kind of commander or other, like when he was the then-unknown genius and PAC man behind a stupid 2012 anti-Obama ad that told Barack Obama to stop bowing at people, because bowing betrays America. As it turns out, Commander Zinke, now head grifter at the Department of Interior, has now been accused of falsely calling himself a geologist over and over, because while it's true he did earn a bachelor's degree in geology at the University of Oregon (he attended on a f'ball scholarship), Zinke has never actually worked as a geologist, like not even as an intern, as far as anyone can tell. But wow, does he ever like calling himself a geologist, because that makes his political decisions sound like they're informed by his personal geologist experience. CNN has a big list!

Last week, when 'splainering to a congressional committee that his decision to shrink Bears Ears National Monument had nothing to do with oil and gas drilling, oh heaven's no, Zinke said,

I'm a geologist. I can assure you that oil and gas in Bears Ears was not part of my decision matrix. A geologist will tell you there is little, if any, oil and gas.

In fact, Zinke has claimed to be a geologist -- or sometimes a "former geologist" -- some 40 times since he was sworn in. Yes, including several times when he was under oath. Hey, it's not a lie if you believe it:

"I can tell you, from a geologist, offshore mining of sand is enormously destructive environmentally, as in comparison to seismic," as he told the House Natural Resources Committee last month.

And, "Florida is different in the currents -- I'm a geologist -- it's different in geology," in an interview with Breitbart News, defending his decision to exempt Florida from offshore drilling.

He's even used his expertise as an undergraduate geology major to back up his criticism of the US Geographical Survey, whose science, he said, sometimes falls short, "from a geologist's point of view" (he called himself a geologist twice in a 24-second video that time).

CNN did the sort of dreary fieldwork that real geologists (and journalists) must do, unearthing a copy of Zinke's biography, in which he explains how he came to his lifelong fascination with Geology:

"I studied geology as a result of closing my eyes and randomly pointing to a major from the academic catalog, and I never looked back. I am just glad I did not find electronics," he wrote, adding that he was focused and a good student, and earned an outstanding academic achievement award his senior year.

After graduating, Zinke wrote that he considered a career in subsurface geological surveying, but after a meeting with a Navy commander, "I realized that I was doing a lot more thinking about SEAL activities -- or what I thought SEAL activities would be -- than I was about geological exploration and surveying."

Sounds to us like when he says he's a geologist, Zinke's playing a not very elaborate shale game. The Interior Department wouldn't tell CNN if Zinke has belonged to any professional groups related to geology, but the department did offer this robust defense:

Ryan Zinke graduated with honors with a B.S. in Geology. His intended career path was underwater geology - and he had college jobs to support that career. Upon graduation he was recruited to be an officer in the US Navy SEALs where he proudly served for 23 years and retired with the rank of Commander.

What college jobs would those be? The best, you bet (fine, we can't rule out an internship, but Interior didn't exactly list any). And no, the consensus in the field seems to be that if you haven't ever worked as a geologist, you're not really a geologist, despite having a BS and spewing even more BS. Then again, we should note that the working geologists CNN talked to are a lot of damn geological elitists:

"He seems not to be familiar with modern geologic knowledge," said Seth Stein, a professor at the Department of Earth and Planetary Sciences and Institute for Policy Research at Northwestern University. "In particular, geologists now know that the climate is warming rapidly because of human activities. This is is causing many serious problems including rising sea level, which is a major threat to coastal communities."

Well that just shows YOU, Mister Smarty-Pants Geologist: There are NO ROCKS in the atmosphere, and climate has nothing to do with geology, unless you count stuff like sea level rise, but still, that's water, not rocks. When it comes to SCIENCE science, not the fantastical imaginings of glorified TV weathermen, Zinke knows what's what:

In September, he touted fracking at a Heritage Foundation event, saying, "I'm a former geologist. I say 'former' because when I went to school, I was taught that we are going to be out of oil in 2003; that there was peak oil. That's not possible with fracking."

Yes, and when I was in school -- I got my bachelor's in English Education the same year that Zinke last studied geology, 1984 -- we learned all about the "false appeal to authority" logical fallacy. That one, unlike the earth sciences, hasn't really undergone much change in the intervening decades.

We'll leave you with this charming challenge for Zinke from an actual geologist, Jess Phoenix, who is running for Congress in California's 25th District:

Hey @SecretaryZinke: I AM a real geologist. I challenge you to a battle of geologic knowledge. Any time, any place. Winner gets the DOI job, loser never claims to be a geologist again. (FYI - Not one of his quotes in the article was correct/made sense).
https://t.co/btlqFTJnrr

Photos of what a real geologist looks like while doing actual geologic research. pic.twitter.com/NJUeCWMM06

This is what I wear when I'm not working on an active volcano. pic.twitter.com/kG4lXKYqWO

Also fun: Ms. Phoenix hears from a dipshit who mansplains that with her mere Master's degree, she's barely more of a geologist than Zinke. Click through to enjoy the whole thread:

Also, we were going to talk more about this OTHER Zinke news, which is that when he had a rightwing radio show, Zinke interviewed birthers, said he wanted to know why Obama hid his college records, and generally was into conspiracy stuff, but really, that's hardly a disqualifying résumé for the Trump administration. You say he's not just a fuckhead, he's a fuckhead with racist sediments?