Sad NYT Nazi YOU'RE FIRED Even Though He Had Such Nice Manners, Sad! 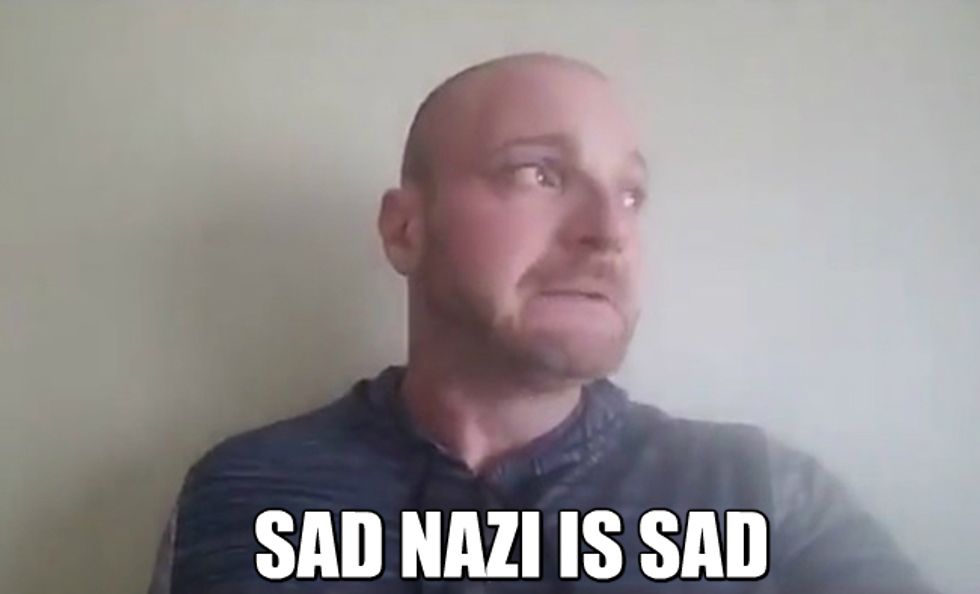 This is Chris Cantwell.

One of the most satisfying things in the world is a deserved comeuppance, where someone gets exactly what they demanded and nothing that they wanted. Today’s sheer plain freude is the New York Times’s favorite fucking Nazi, who no longer has a job! Also too he has had to move out of his house because it turns out it is super-scary to live in a world where random people hate you and are willing to threaten violence at you for just existing and shit!

We can't ignore the fucking Nazis. We don't have to fawn over them either.

See, after his dozens of NYT mentions but particularly that profile of that fucking Nazi, a bunch of people started calling the fucking Nazi’s workplace to ask if the owners were aware that there was a fucking Nazi working there! In the spirit of free association (which after all is the bullshit fig leaf the fucking Nazis are using! They’re not white supremacists you see, they’re white nationalists! They don’t want to genocide anyone at all, they just want to be able to establish an all-white society and never deal with anyone else, but you fuckers wouldn’t even let them have Oregon! I bet you didn’t know that Oregon was set up as an explicitly white state and technically didn’t change the law that made it a crime for a black person to live there until not that long ago, but they did and here you people come talking about “people already lived there” and shit. Leave the fucking Nazis alone, you guys!) the place where the fucking Nazi worked decided that there was an unsavory or dangerous element in his little corner of the world, and summarily ejected the fucking Nazi! Oh, and the fucking Nazi’s wife and her brother worked there too, and were also fired after being asked if they agreed with the fucking Nazi!

(Note: every time this shit happens, business owners talk about how their whole staff is in fear and there’s threats and gross shit going on. Should you ever feel a need to inform someone who they are associating with, you should conduct yourself on the assumption that they do not already know that! That is why you are telling them! Do not fuck with random service staff because some fucking Nazi hid himself at work and then the NYT ran a PR piece on him, assholes!)

Instead of building an Aryan cabin with his manly hands like White Jesus intended, the fucking Nazi’s gone crying to his compatriots on a racist crowdfunding website. (No, really, it’s called GoyFundMe. Fucking Nazis, I’m telling you!) He’s raised a lot of money, well over the grand he was asking for.

I was at the Malheur National Wildlife Refuge when the Internet decided to stop merely mocking Y’all Qaida and Vanilla ISIS (which, frankly, even Ammon Bundy thought was clever because it was) and take it to the next level by sending supplies.

The one thing it seems racists hate more than anything is marital aids. Buttplugs, vibrators, whatever you can buy on Amazon for under ten bucks, whole boxes of them showed up to the refuge and it was the one thing I ever saw get under their skin.

Which is about as much serious discourse as we should engage in with fucking Nazis.

We also get crowdfunded but then we are not fucking Nazis so pony up, and pay us.