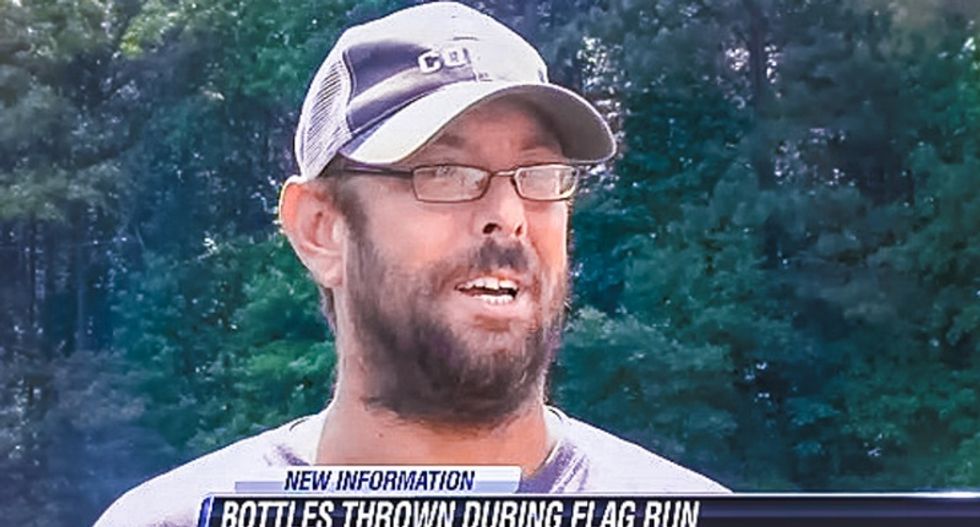 In today's episode of "What About MY Civil Rights, Bro?" we bring you the tale of sad Confederate-flag waver and butthurt neckbeard Chris Oliver and his wife Angela, who were taking part in a "Confederate flag run" through the mostly black town of Petersburg, Virginia, when they were astonished to be greeted by unruly local negroes throwing water bottles and shouting vile racial slurs at him. The ordeal was so traumatic that Chris called the police and insisted that justice be done! Watch the shocking news video from WBBT, if you dare!

The Olivers were just minding their own business, along with roughly 100 other people driving pickups carrying large Confederate flags -- in a totally non-confrontational manner -- when someone threw a water bottle at their pickup. AND DENTED IT!

“My initial reaction was, ‘What the hell?'” Oliver recalled, adding that he could not understand why he had not been welcomed into the community.

Angela Oliver said that she was angry because the Confederate flag parade had come to Petersburg as a “peaceful ride.”

“People throwing bottles at our vehicles, our property that we worked for,” she lamented.

The horror. It's like those people dented their hearts.

Chris Oliver also said that he feels ill-served by the Petersburg police, who said that they didn't have enough evidence to catch the bottle-throwers. Have these people never heard of forensic science? Also, what about the hate crime aspect of all this?

“The racial slurs are really what hurt me,” Oliver remarked. “You know, it’s uncalled for. There’s no need for that in today’s society.”

Yr Wonkette doesn't even want to think about how much money this poor sad neckbearded bucketload of stupid is going to collect in the inevitable GoFundMe to repair a small dent in the side of his goddamned pickup.

It is not known whether the Olivers felt that the abuse they suffered was on a par with the marchers at Selma, who were beaten senseless with nightsticks, or if it was more akin to the children of Birmingham being hit with firehoses that could strip the bark off trees. Given that their vehicle -- their property, that they had worked for! -- suffered an actual dent, we feel safe in saying that they no doubt experienced a level of fear commensurate with that felt by James Chaney, Andrew Goodman, and Michael Schwerner, whose station wagon was also harmed in a similar 1964 incident.