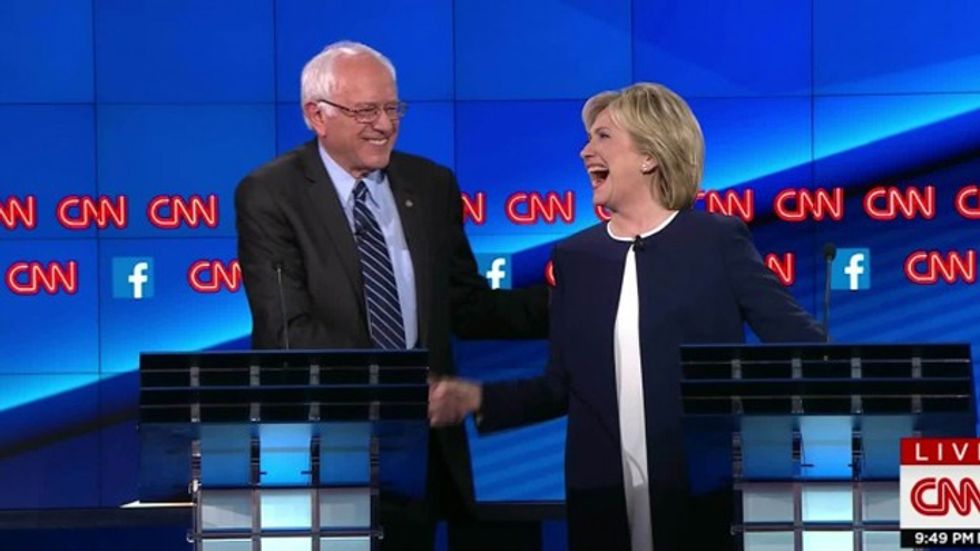 Salon is terrible. We all know that. Besides giving good money to our dear Gary Legum and the funny and smart Simon Maloy, it hasn't contributed to society in a worthwhile way in years. (It used to be good, smart, and interesting! Weird, right?)

Lately, all it does is yell shrilly at people for belly dancing while white or other, but equally genocidal, crimes against the proletariat; it's also become the favored home of young idiots smugly explaining the many murders of Hillary Clinton.

But a post today is far worse than the usual Haha Goodman fare; today's post explains that a pure young person should not vote at all -- maaaaybe for Bernie Sanders, but that would still be "uncomfortable" -- because voting makes you complicit in the criminal enterprise that is American politics.

Salon is one of the biggest websites in the world. It is about 20 times more popular than your Wonkette. This is a fucking disgrace. Salon is stupid, and your Wonkette is smart and rad. It is time for you to help us right this wrong. Spam the fuck out of your friends and neighbors with links to disgusting Wonkette stories. Do your part. Because this fucking aggression cannot stand, man!

Let us hear the idiot words from the asshole in question, from her keyboard to God's ears.

Four years ago, I attended a College Democrats conference in Chicago. I set foot inside Obama’s campaign headquarters and felt the enthusiasm about his presidency first-hand. For the first time, I called myself a Democrat with confidence. Democracy empowered me. I wanted to share my enthusiasm with the entire world.

Throughout my college career, I was actively involved with the College Democrats. I served as president. I recruited friends to attend meetings, volunteer for voter registration drives, petition for candidates, canvass in local neighborhoods and spread the word about upcoming presidential debates. I even formed close relationships with fellow Democrats through it. Civic engagement and active citizenship was my life. I wanted to empower everyone around me to exercise their political power.

Okay, so far, so boring. As I used to tell my students, just because you think a thing does not make it interesting. But let's go on.

This election, I feel different. As an otherwise hopeful millennial, it’s becoming more apparent our political system is broken, corrupt and unjust. This isn’t an unpopular opinion for my generation, either. Admittedly, I feel conflicted as a political activist. I’m uncomfortable abstaining from the most invaluable, basic aspect of democracy. It’s a new concept for me. However, shedding my Democratic label is also new to me.

In the Wyoming caucus Sanders won the popular vote by 12%, but Clinton scored four more superdelegates.

That is true. If Danielle Corcione lives and votes in Wyoming, she should probably be pretty mad about it. She goes on to say this is a crime against the will of the people -- using Joe Scarborough for support, and declining to mention Hillary Clinton's 2.4 million vote lead in "the will of the people." But that's fine. It's no more disingenuous than any other partisan.

But ... and here's a big but! Even her vote for Bernie Sanders would be given "uneasily."

So far, Sanders is the most competent candidate for my political positions and stances. Although I’ve been a vocal advocate for him in the past, he doesn’t meet my standards for gun control, racial justice and foreign policy. Previously, Sanders voted against background checks for gun purchases in Congress and explicitly explained his stance against reparations. Only recently has he started standing up for Palestinians.

However, if Sanders somehow wins the nomination, he’ll get my vote. I’ll feel uneasy about it, but at least the Democratic ticket picked my more favorable candidate. Otherwise, I’ll leave that space blank.

That is mighty nice of her to deign to maaaaybe vote for Bernie Sanders, even though he disagrees with Danielle Corcione on one and possibly one and a half issues.

But Danielle Corcione totally "gets" citizen participation! She has been a Democratic activist! She understands shit is important and shit!

This election year, I’ve been preoccupied with the theory of citizen participation. We support a system by actively taking part in it. In a capitalist economy, we support a company when we purchase their products and services. When we shop at Walmart, our money keeps them in business. When we protest Walmart, we find gratification in purchasing fair-trade and locally sourced goods and services.

Boycott voting! That will definitely teach all those plutocrats, instead of them laughing their asses off while snorting cocaine off unartisanal, non-organic, un-fair-trade child sex slaves.

In a truly democratic system, we’d have more competent, diverse candidates. Voting no longer provides me the indulgence and satisfaction it once did. I feel it does more harm than good with our current political climate. If I vote for Clinton as a rejection of Trump, or vote for Sanders to dodge a Clinton vote, what duty am I actually performing? When I vote for a president I don’t support, I support a flawed political system. I refuse that system.

Danielle Corcione would like to move to Narnia, so she can vote for Aslan, who is Jesus and stands up for Palestinians the right way instead of only doing it recently.

Vote Wonkette, y'all. With your eyeballs and your dollars and your EBT cards and your Facebook links and your Twitter RTs and your Snapchat sexts. Help us skullfuck Salon. With votes.