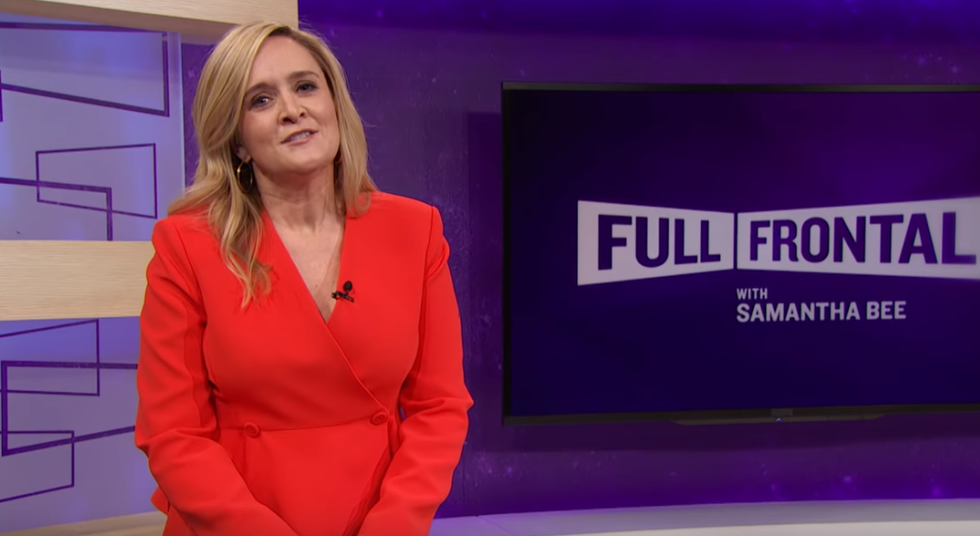 Sam Bee has issued an apology she should not have had to issue:

I would like to sincerely apologize to Ivanka Trump and to my viewers for using an expletive on my show to describe her last night. It was inappropriate and inexcusable. I crossed a line, and I deeply regret it.

Oh god, this day is ridiculous. Sam Bee, Wonkette loves you, and we are sorry people who are idiots thought that was necessary.

Editrix Rebecca already weighed in this morning on why this non-troversy is stupid and manufactured and only happened because stupid conservatives are VERY VERY SAD their beloved bigot folk hero Roseanne got herself canceled, just because she tweeted vile and racist things, which nobody could have seen coming.

Yet here we are. CNN has been going apeshit all afternoon about how Samantha Bee should say she's sorry that she (a woman) used a word ("cunt") that is very much a word she (a woman) can say if she wants. (We are a gay man, therefore that's not our word. "Faggot" is, though, SMILEY EMOTICON.) She used it to describe the BEHAVIOR of another woman, Ivanka Trump, who YET AGAIN is being tone-deaf and doing absolutely nothing in her role as First Daughter/White House Job Haver to restrain the worst instincts of her shithole father. And of all the women in his life, SHE'S THE ONE WHO COULD DO SOMETHING, if she cared. If she wasn't so "feckless," if you will.

And lest we forget, Bee called Ivanka Trump that word ("cunt") because the Vankster was posting pics of her wealthy white self with her happy baby, against the backdrop of a civilized nation horrified at how Ivanka's daddy is ripping refugee families apart. As commenter Daniel noted, it very much smacked of this:

Samantha Bee wasn't being discriminatory or sexist when she used the word she used ("cunt"). She also wasn't punching down. We know conservatives are very delicate snowflakes who have literally no clue how racism works or how sexism works, or at least they play like they don't. Because everything is a game of "stickin' it to the libs!" in their world, they latched on to this, because they are desperately hungry for a scalp. Also, they are pretty much always big angry pubes about everything, because the culture left them behind many decades ago, never to return.

Sarah Huckabee Sanders opened her lie mouth about Bee's comments, before Bee was forced by cowardly suits to apologize:

“The language used by Samantha Bee last night is vile and vicious. The collective silence by the left and its media allies is appalling,” Sanders told TheWrap.

“Her disgusting comments and show are not fit for broadcast, and executives at Time Warner and TBS must demonstrate that such explicit profanity about female members of this administration will not be condoned on its network.”

Oh fuck off! Members of this administration don't deserve to be treated with any more deference than anyone else! They are a vile cohort who are ruining America right this second. And because we're not insipid prudes, SOMETIMES WE SAY CUSSES ABOUT THEM. Fucking deal with it, you maladjusted ass clown.

Also, we are not interested in hearing what the Trump administration thinks is "fit for broadcast," because this is America, godmotherfuckingdammit, and we have a thing called the First fucking Amendment, so shut the fuck up with your ENTIRE mouth, Sarah Huckabee Sanders. You know how sometimes somebody gets criticized for saying some dumb fucking thing and then they shout MY FIRST AMENDMENT? And we, because we are SMRT, shout back "the First Amendment only applies to government action, YOU BUTTHOLE"? Yeah. The president of the United States demanding someone be fired for criticizing his daughter is ... it's that.

Also, shall we take a moment to realize that if Donald Trump called somebody a cunt in public, Sarah Huckabee Sanders would hop, skip and jump to defend him and his "locker room talk," and that she would do it gleefully?

We'd be doing journalistic malpractice right now if we didn't remind y'all of that time we called Sanders a Debased Redneck Motherfucker, which caused the whole right-wing, paste-eating, cousin-molesting side of the internet to lose its fucking marbles at us and threaten to kill our dog. In their minds it is "sexist" to criticize a conservative woman for her actions, because conservative women apparently need to be protected from liberal criticism, a notion that is in and of itself horrifically sexist.

While we're on the subject, we've also told Ivanka Trump in no uncertain terms to go fuck herself in the past, and guess what? It was for much the same reasons Bee did it! She just happened to use a VERY NAUGHTY WORD.

(Both of those pieces went viral, because DAMN RIGHT THEY DID. Also, because we were just saying what all patriotic Americans think.)

In response to this very stupid "controversy," a host of well known idiots have weighed in on how AWFUL Samantha Bee is for using a naughty word to describe Beloved Ivanka, America's Sweatshop Princess. There was known fucking idiot Megyn Kelly, who knows Bee's words were the same as Roseanne's racism. Thank god Sam Bee didn't say Santa was black, right, Megyn? Unfuckable rage monkeys like Erick Erickson and Matt Walsh also weighed in, expressing their shock and awe that a woman such as Sam Bee would dare to say what she really thinks of Ivanka Trump.

Meanwhile, Chris Cillizza, whose daily work consists of bottling his own wet farts and publishing them on CNN as "political analysis," got into a fight with Kathy Griffin about CAN'T WE ALL BE SWEET TO EACH OTHER?

Everything about this is so goddamned stupid.

We will be watching this one closely, and we plan to get MUCH MORE RELIGIOUS about watching "Full Frontal," which airs Wednesday nights on TBS. So should you.

In the meantime, to Sam Bee and her writing staff, we look forward to the MANY CREATIVE EPITHETS you will use to describe Vanky and Sarah Huckabee Sanders on next week's show, since they're apparently not allowed to say "feckless cunt" anymore.

They will be as delicious as they are completely incomprehensible for Trump supporters! HOORAY!

Now this is your motherfucking END OF DAY OPEN THREAD.