Sandy Hook 'Truther' Planned His Very Own Mass Shooting ... Or So They Want Us To Think 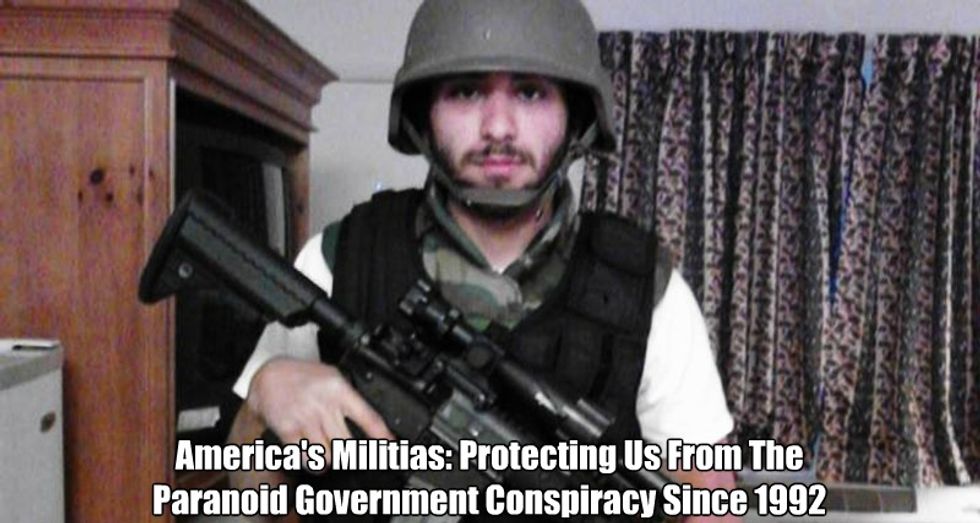 It's rabbit holes all the way down.

So here's a surprise: a Las Vegas man who believed in just about every possible conspiracy theory -- and was accordingly heavily armed, so as to protect himself from the New World Order, the Illuminati, the Rothschilds, the Jews, the Blacks, and the Lollipop Guild -- has been charged with threatening to carry out his very own mass shooting, except that his would be real, not fake like the one at Sandy Hook Elementary in Newtown, Connecticut, the subject of one of many videos he'd made.

Bryce Cuellar, 24, was arrested by Las Vegas police after they were notified by Interpol in July about Cuellar’s video. In the video, Cuellar stated that he is tired of the government trying to take away his First and Second Amendment rights and planned to go on a killing spree.

Calling himself a “Christian warrior,” Cuellar bragged that he would use his weapons as the Founding Fathers intended, killing "gays, faggots, lesbians and satanists.”

known to Metro Police for about three years, during which time he has increasingly radicalized, according to his arrest report. The July message was aggressive enough to constitute a credible threat.

It was also credible enough to a jury, which indicted him Wednesday, court records show. He is to face one felony count each of making threats or conveying false information concerning acts of terrorism, conspiracy to commit a crime, and one misdemeanor of attempting to destroy evidence.

Cuellar was arrested on a domestic battery charge the night he uploaded the video to YouTube. Google removed it July 1 and notified Interpol of the threatening content, and the international police agency contacted the Las Vegas Metro Police's counterterrorism center the next day. Cuellar seemed right sorry about all those things he said, at least:

In an interview, Cuellar told detectives he "screwed up with the video" and that he was angry, and drunk from consuming substantial amounts of beer in a 30-minute span, but that he was not a murderer, the report said. His wife, also booked at the Clark County Detention Center that day, provided little assistance in the investigation.

Sovereign Citizen love means never having to say you're planning a mass shooting.

In the removed video, Cuellar reportedly showed off his .308 sniper rifle and an AR-15-type semiautomatic rifle and said that "America is done and America is over, 'F--- America' and he will fire his gun in order to initiate a civil war within the United States and within the government," according to police reports.

Forbes reporter JJ MacNab, who tracks Sovereign Citizen and other "patriot" wingnuts, tweeted that Cuellar's YouTube videos "are very popular in the anti-gov movement. His handle is FisherOfMen w/ 160,000 subscribers." In a classic case of "crank magnetism," Cuellar seemed to subscribe to virtually every conspiracy theory out there, from 9/11 and Sandy Hook trutherism to fear of the Illuminati, not to mention videos insisting the Moon Landings were faked, as is virtually all U.S. TV news. He's also got proof that dinosaurs are still alive, that angels and demons are real, and of course that Planned Parenthood is sneaking fetal parts into our food and drink. In one message posted six months back, Cuellar even had a meta-complaint about YouTube messing with his own account, because why wouldn't they be in on it, too?

Cuellar faces separate trials on the domestic battery charges and those relating to the video; in the latest incident, he's being held on bail of $100,000. He's also been referred for a psychiatric evaluation, if you can believe that, and his next hearing is set for September 1.

Yr Wonkette will keep an eye out for Truther truthers who insist Cuellar was a government agent all along, planted to make the patriot movement look unhinged.