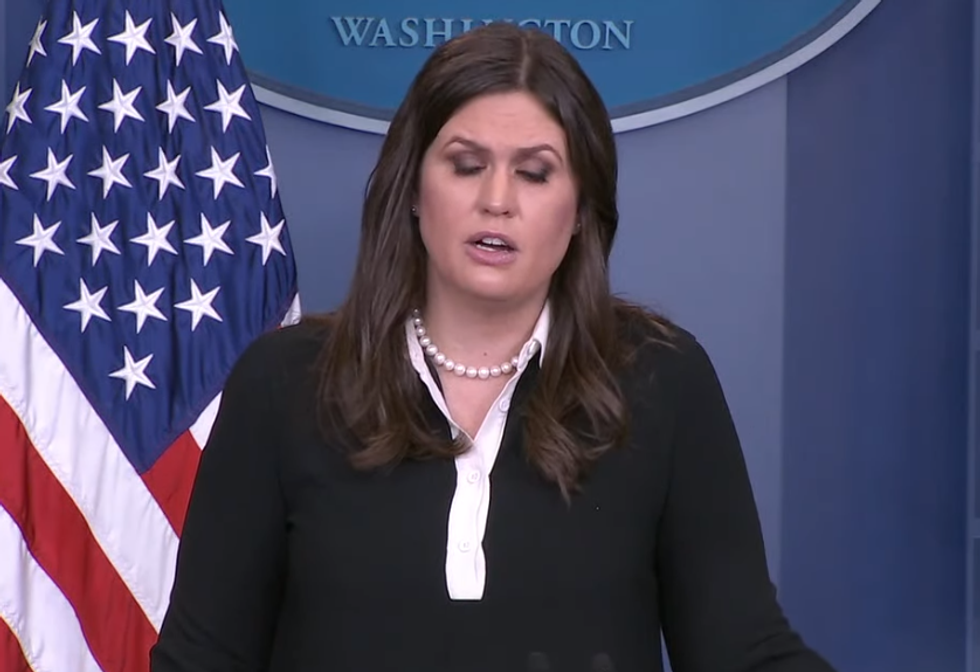 The fallout from #FaceLiftGate continues! White House Deputy Press Secretary Sarah Huckabee Sanders went on Fox News this morning to explain that Donald Trump has a right to punch girls right in their wherevers when they bully him and hurt his feelings. Wonkette thought, "That's what you're going with? Huh OK!" So we all knew today's White House press briefing would be just great, and boy oh boy, did the Shuckster deliver! We hope she's saving these tapes for her young daughter, when she's teaching her about how she should expect to be treated by men.

After Huckabee Sanders yammered some bullshit about the Trump agenda Donald Trump is distracting us from by bellyaching on Twitter about what a pussy he is, the questions began, and so did the FIREWORKS. Here's your video (the Q & A section starts about an hour into the livestream), and below we'll give you some choice quotes.

In response to John Roberts, who asked if Trump went too far in his attack on Mika Brzezinski:

I don't think so. I mean, I think that the president has been attacked mercilessly on personal accounts by members on that program. And I think he's been very clear that when he gets attacked, he's gonna hit back. I think the American people elected somebody who's tough, who's smart, and who's a fighter.

Tough and smart? Hahahahahaha, OK, fuckhead, that's your answer, so we guess we'll just have to stick with it. Put another way: Trump lost the popular vote by three million, because the MAJORITY of Americans know that when you whine and cry like a baby every time a TV lady makes fun of you, you look like a sniveling crybaby with a half-inch penis.

The things that this show has called him. And not just him, but numerous members of his staff, including myself and many others, are very deeply personal. So to then turn and pretend like this is approach is, I guess it's kind of like we're living in the Twilight Zone. They do this day after day after day, and then the president responds and defends himself and everybody is appalled and blown away. Frankly, if this had happened in the previous administration, the type of attacks launched on this program, the things they say, "utterly stupid," "personality disorder," "mentally ill," constant personal attacks calling multiple members liars, liars to their faces while they're sitting on their program, the rest of the media would've said, "Guys. No way! Hold on!" But nobody does that. The president, he's not gonna step back, he's shown that, and that's exactly what he did today.

So much to unpack here! First of all, Barack Obama put up with FAR worse than Trump does, from Fox News and insane elected racist Republicans and people named Donald Trump who started lying smear campaigns about him being a secret not-American, but Obama let it roll off his back, because Obama is a bigger man than Trump is.

Also, the Trump White House is full of liars, all of whom are paid to lie. Donald Trump is a liar. Kellyanne Conway is a liar. Mike Pence is a liar. Sean Spicer is a liar. So fuck off with your "WAAAAAH STOP CALLING LIARS LIARS JUST BECAUSE THEY'RE LIARS, UNFAIR!"

John Roberts followed up by echoing remarks from Republican senators Lindsey Graham and Ben Sasse, who said Trump's tweets this morning (like all his behavior since the day he was born) is far beneath the dignity of the office of the president. Here's what Huckafuck had to say about the "dignity of the office":

Look I think that he shows that every day ...

Nope, he's a disgrace who deserves respect from no living man or woman.

But he's not gonna sit back and be attacked by the liberal media Hollywood elites ...

HOLLYWOOD ELITES! Liberal Mika and Conservative Joe and everybody in all of Hollywood made teases about Li'l Old Preznit Munchkin Paws, and his mama with the fucked up hair taught him if those people make him cry, it's OK to punch girls and grab them by the pussy. Is that right?

Another journalist noted that some Republican critics of Trump's tweets have drawn a parallel between Trump's rhetoric and the violence that was visited upon Congress when a gunman shot Rep. Steve Scalise a couple weeks ago. Does the president bear any responsibility for trying to tone down his rhetoric in this heated climate?

The president in no way, form or fashion has ever promoted or encouraged violence. If anything, quite the contrary.

THE FUCK YOU SAY, HUCKASPAWN! Remember three paragraphs ago when we called her a liar? It's because she's a liar. Trump has promoted and encouraged violence ONE METRIC FUCKTON of times, most notably at the hootenannies/sibling speed-dating sessions known as Trump rallies. For instance HERE and HERE and HERE and HERE and HERE. Fuck off, Sarah Huckabee Sanders, you asshole.

Finally, before we officially hit our wall of patience on this news story, here is Suckabee asking why we're not more outraged at MIKA BRZEZINSKI for being MEAN TO THE PRESIDENT like ALL THE TIME to the point that TEARS TRICKLE DOWN HIS GRUNDLE AND MIX WITH THE SKIN FLAKES AND DRIED KETCHUP on his DISGUSTING FLAB-ASS INNER THIGHS:

Again, I think that the president is pushing back against people who attack him DAY after DAY after DAY. Where is the outrage on that? You guys are constantly coming and asking like "Is this OK?" He does it one time [one time? - Ed.], this is day after day after day. ... The only person I see a war on is this president and everybody that works for him. [...] I don't think you can expect someone to be personally attacked, day after day, minute by minute, and sit back.

Um yeah, you can, it's sort of part of being the leader of the free, democratically elected world. But we get it. Donald Trump obviously doesn't have the testicular fortitude for this job, so he should probably resign and go do something he's qualified to do. We'll fill in the blanks on that one as soon as we figure out a job Trump isn't too stupid and weak to do.

There was a lot more bellyaching we left out but we don't want to watch this fuckery anymore.

Mike Huckabee, can you come collect your daughter and check her brain for ticks?