Sarah Huckabee Sanders Says She Is Honest Person, So There's Another Lie For Ya 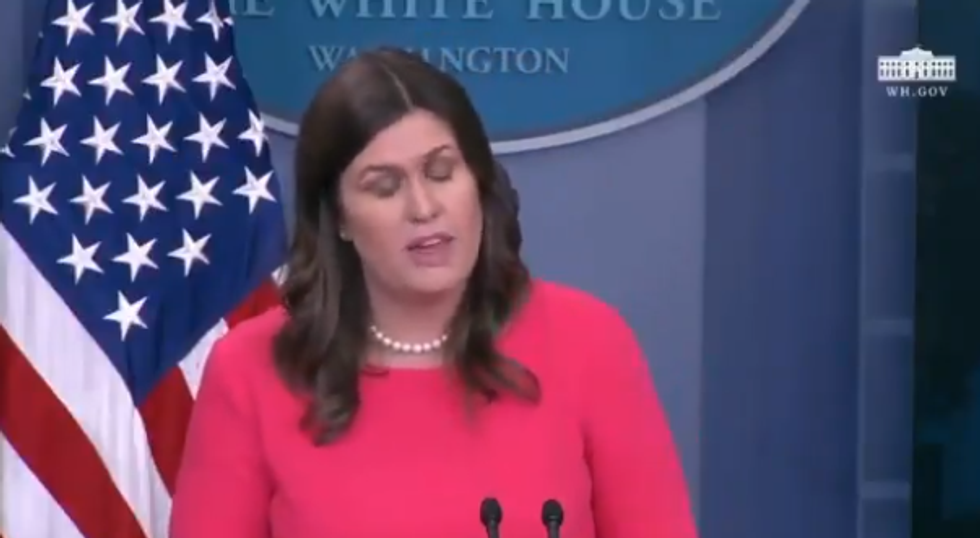 On Monday, in the wake of revelations that Donald Trump's own legal team admitted in a letter to special counsel Robert Mueller that Trump had dictated the lie statement about his dipshit son Junior's June 2016 Russian Treason Meeting, and that Sarah Huckabee Sanders had lied about it to America's face, Sanders was confronted by journalists during the daily press briefing. Would she say she's sorry for lying? Would she show some remorse for how she is always such a Smoky Eye Full O' Lies every goddamn day of her life?

Hahahaha, fuck you. When she wasn't ignoring journalists' questions entirely, she was referring them to the president's lawyers and taking zero responsibility for her own behavior.

Reporters went at Sanders again during her Tuesday briefing, just to see what happened, for shits 'n' giggles we guess. Let's go to the tape!

This is the exchange where Sarah Huckabee Sanders yet again lies to us.

This time by claiming she is honest and provides accurate information. pic.twitter.com/rhToUZLDz9

REPORTER: Do you think your statement in August [2017, in the early days after we learned of the treason meeting] was accurate?

SANDERS: Uh, again, I know you want to get me into a back-and-forth on this conversation ...

REPORTER: ... You said something, we just want to know if it was accurate or not.

SANDERS: I know your goal is to engage me in a conversation about matters dealing with the outside counsel, and I'm not going to do that today.

REPORTER, INCREDULOUS: You said something from the podium. Was it accurate or not? That's all we want to know.

YOU READY? YOU READY FOR THIS NEXT THING FROM SARAH HUCKABEE SANDERS? FASTEN YOUR SEATBELTS, TRAYS IN UPRIGHT POSITION, ETC.

SANDERS: Again, I work day in, day out, and I believe, frankly, with the majority of you here in the room, I think y'all know I'm an honest person who works extremely hard to provide you with accurate information at all times. I'm gonna continue to do that.

At another point in the briefing, this happened:

"Frankly, I think my credibility is probably higher than the media's," Sanders stated later in the briefing. "I think in large part that's because a lot of you guys spend more of your time focused on attacking the president than reporting the news. I think that if you spent a little bit more of your time reporting the news than trying to tear me down you might actually see that we're working hard to provide you good information."

Sarah Huckabee Sanders's momma and daddy shoulda spent a little less time failing to teach Sarah's brother that it's not OK to murder dogs, and a little more time teaching Sarah that it's a sin to tell lies, that's what we think.

At the end of the briefing, Brian Karem, White House reporter for Playboy who has handed Sanders her ass in public before, did this:

As Sarah Huckabee Sanders leaves the #PressBriefing after telling reporters she has more credibility than them and won't answer to Trump's lies on the Trump Tower meeting, @BrianKarem asks:

"What color is the sky in the President's world?"

That is just about equally as good as how Karem reacted after Sanders fed him some bullshit during Monday's briefing:

At some point maybe the rest of the White House press corps can make like a common Brian Karem and hold that asshole accountable.

Or maybe they won't, because they're all whiny ass titty babies too concerned about their precious access to call lies out as lies. We saw what happened after the White House Correspondents Dinner, after all.

Wonkette is ad-free, doesn't track your shit, and LOVES YOU. Money us if you are able?