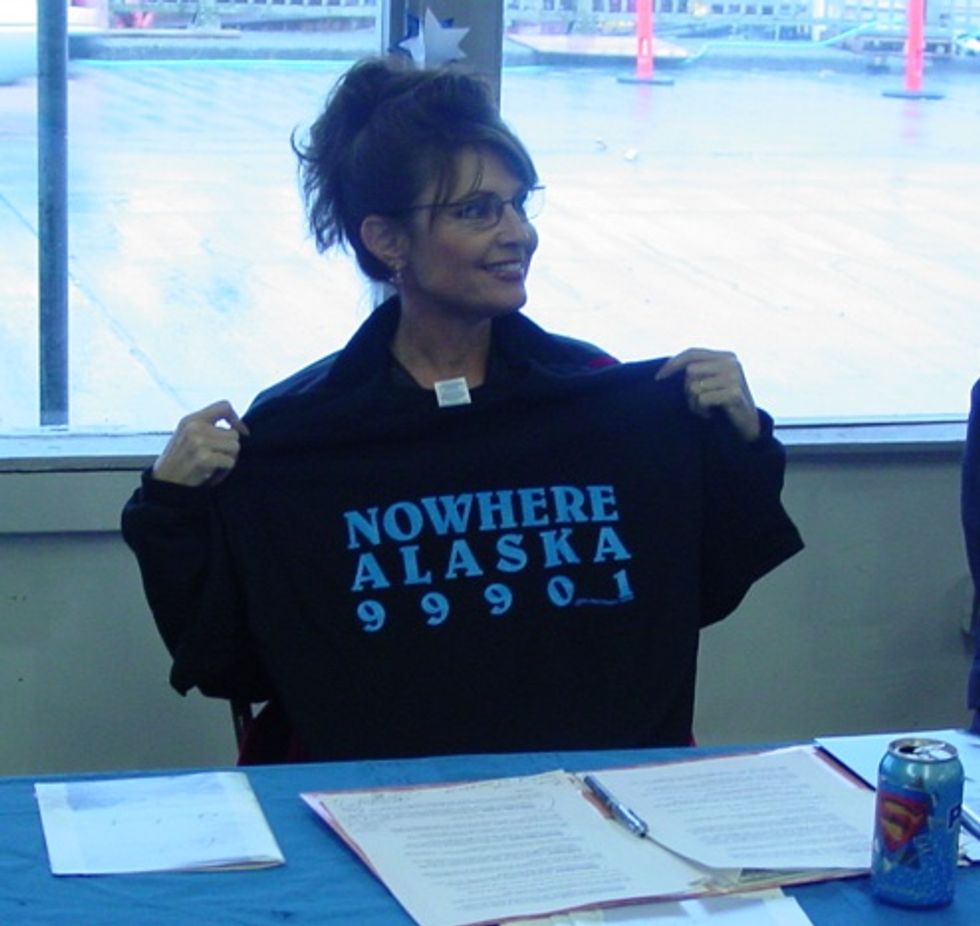 Sarah Palin continues to be a major critic of President Barack Obama. Why are people giving her a platform? Why would anyone think she has any particular insight into national issues and how our federal government should operate? Wouldn't it be cheaper just to mic up a grilled cheese sandwich and ask it questions? But at least she adds to the diversity of the medium, because unlike most people on our teevee boxes,she hates the United States of America.

Sarah Palin Monday night chided President Barack Obama for his support of the right to build the proposed mosque two blocks from Ground Zero in New York, saying the president "doesn't get it."

Oh, no? Good to see that Sarah Palin managed to get her doctorates in religious studies and political science. Finally, somebody who can speak with authority on this subject.

"It sounds cliched to say that the president is disconnected from the American people on this issue, but how else do you describe it," the former Alaska GOP governor said on Fox News.

You want to know who else is disconnected from the American people? Sarah Palin! She lives in the middle of nowhere, thousands of miles from where the vast majority of Americans live. Which is fine! But it is sort of hard to be the voice of America. Not impossible! But it is impossible to be the voice of America when your idea of America doesn't extend beyond uneducated white people who are Christians. And when you think that is the only kind of America that should exist, that is known as hate.

You want to know how to describe the president's view on this issue? It's the great American tradition of not giving a shit what other people do or want to believe. And yes, it's pretty important to the fucking Constitution.

"He just doesn't get it, that this is an insensitive move on the part of those Muslims who want to build that mosque in this location."

Somebody is not getting it! Somebody is being insensitive! Perhaps with some education, Sarah Palin could understand that "those Muslims" are Americans. And perhaps she might understand that the mosque that is ALREADY THERE gets pretty crowded! That is one reason why it would be good to put another one in this location! And perhaps she can understand that cities are places where people are not just white and Christian! And perhaps, for a fucking second, she can try to understand how it feels when somebody hates you and associates you with terrorists because of your religion or your name or the color of your skin, even though you love your country. And then perhaps she can understand that she does not live in this fucking neighborhood and has no idea what should or should not be built there. There is probably a crazy homeless man who masturbates at the World Trade Center site every day, but she has no idea.

"It feels like a stab in the heart to, collectively, Americans who still have that lingering pain from 9/11."

Yeah, gonna go ahead and assume it might feel more like a stab in the heart for people who simply want to be a part of their own community and practice their own mainstream religious beliefs in a simple manner, without being called the murderers of people who used to work in their community.

If it feels like a stab in the heart to Americans that Muslims are a part of our society so close to where the World Trade Center stood, not only do those Americans refuse to acknowledge the true nature of their country, they actually hate it.

"If the purpose of this mosque, as we are lead to believe, is to create this tolerant environment, to avoid anything like a 9/11 ever repeating, you have to ask why didn't one of those 100 [existing] mosques already accomplish such a thing," Palin said.

Yes, isn't it fucking amazing, Sarah Palin, that no matter how much Muslims practice their religion peacefully and are decent, hard-working Americans, people like you still refuse to tolerate them? We certainly do have to fucking ask why people like you continue to not tolerate them! What do Muslims have to do for you to tolerate them? Oh, right, there is nothing they can do. You just have to stop hating them. That's something you have to do. They can't do it for you.

Meanwhile, the grilled cheese sandwich waits by the phone for someone to call it and let it give its opinion on how exactly we should restrict religion in the United States. [Politico]