Sarah Palin Demands Head-Exploding Orgasms From Mitt Romney, Will Not Get Them 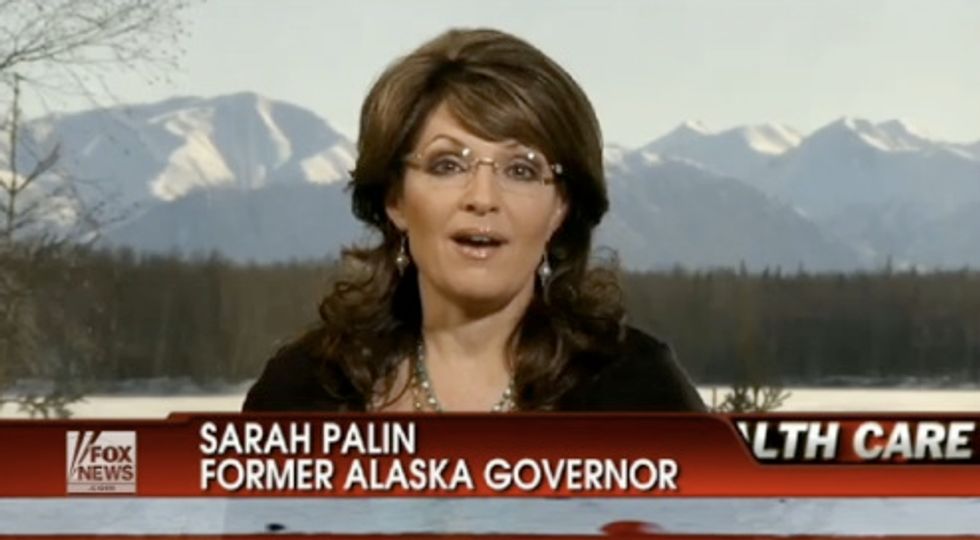 Now that Mitt Romney seems to have the Republican nomination wrapped up (although who knows, maybe he'll be going to jail for lying on his resume), we need to know what Sarah Palin thinks of him. Ex White House deputy Press secretary Bill Burton is very curious about why Sarah Palin hasn't endorsed Mitt yet. Are you curious? Enh, probably not, but that hasn't stopped Sarah Palin from explaining what it is that she, and by extension the Republican base and independents (who she seems to think are the same people?), really need: for him to be "courageous and bold and passionate" and "light our hair on fire". Is this a sex thing? Normally we'd say "yes," because we're crass like that, but Mitt Romney is surrounded by a powerful anti-erotic forcefield from which no cheap sex joke can escape.

But that doesn't mean we can't try! Here, here is a terrible and loathsome ad for some line of Trojan-branded "massager", where ladies keep saying it'll "blow your hair back," as if that's a thing humans say:

This is what your Editrix showed your Comics Curmudgeon in the Wonkette Secret Chat room when the phrase "light our hair on fire" was mentioned, which will serve as evidence in the sexual harassment suit currently being prepared. Also, former counter-terrorism head Richard Clarke said that George W. Bush's spymasters were running around with their hair on fire in the summer of 2001 trying and failing to get the administration's attention about al-Qaeda, so maybe Sarah Palin is demanding that Mitt Romney stop terrorism, forever?

But anyway, here are the word-noises Sarah Palin made to Sean Hannity about the presumptive nominee:

But Palin added, "There are a lot of his base supporters -- independents -- who are saying, well, light our hair on fire, then! Remind us how important it is that we get engaged in the presidential election because it is the election of our lifetime."

The Fox News contributor encouraged the former Massachusetts governor to be more "courageous and bold and passionate" in presenting his case.

In other words, Sarah Palin is totally fine with the standard-issue establishment GOP party line policies espoused by Mitt Romney, but she wishes he were being much more of a dick about promoting them, which sounds about right. [Newsmax]