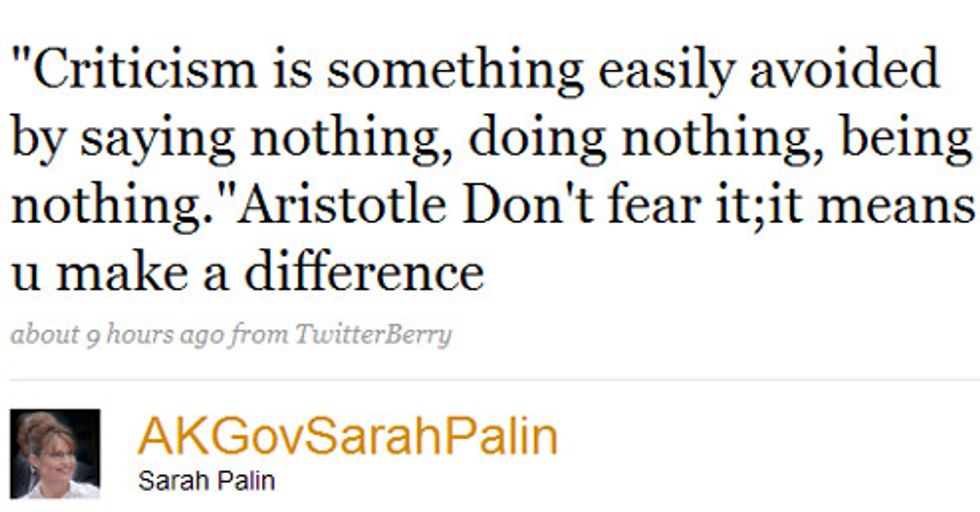 Read the boring old ghost-written industrial-lobby press release "op ed" under Sarah Palin's byline in the Washington Post today if you want the neocon elitist version of the Alaskan idiot. For the real "Let Sarah be batshit Sarah" Palin, you must look (with horror) upon her Twitter page.

Our comrades at The Awl sort of jokingly suggested the other day that Palin would just go through an entire paperback of Bartlett's Familiar Quotations, posting hilariously misquoted and misattributed typo-ridden TXTspeek versions of the Great Lines of History at all hours of the night, forever.

And, well, you make "jokes" about Sarah Palin at the peril of your own sanity, because no comedic mind on Earth has yet to come up with something more outrageous than Palin's actual behavior.

So, yes, she is Twatting her way through some collection of Inspirational Quotes, probably from an airline magazine article or the tag on her yoga mat, and she makes zero fucking sense, as always, and the ultimate question is, really, why do only 23% of Americans support her? Seems like she could hit 60% or 70% -- closer to the actual percentage of legally stupid people in this country -- if she could just escape the whole "Republican" albatross.

Also, Sarah, you circus freak quitter, YOU HAVE TO QUIT USING THE "AKGovSarahPalin" TWITTER NICKNAME THE DAY YOU OFFICIALLY QUIT, ON JULY 26, IN TWELVE (12) DAYS, OR YOU'RE GOING TO FEDERAL PRISON FOREVER. [Twitter/The Awl]