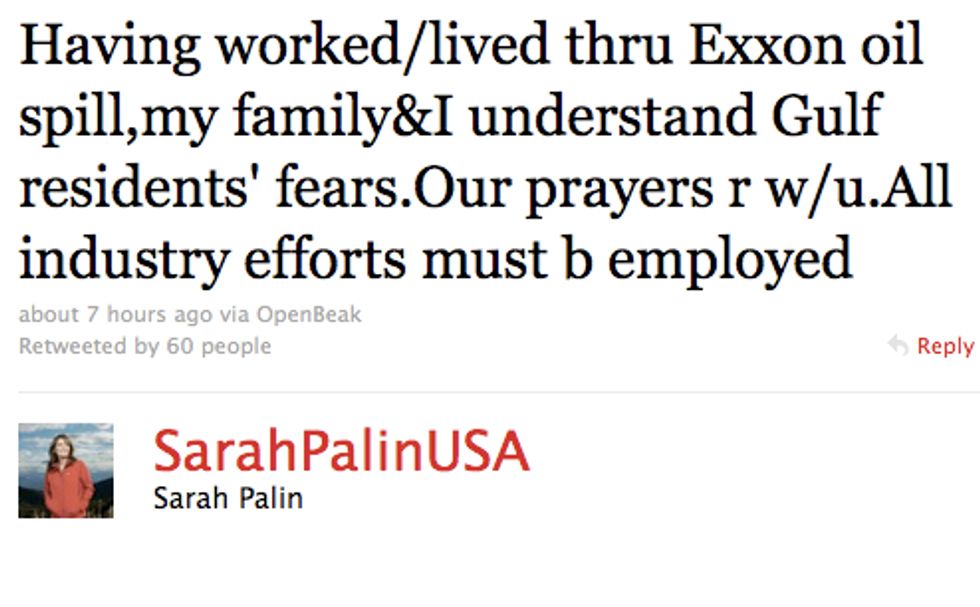 Aha, we've been waiting for a comment from America's most pandering oil-company cheerleader, and here we go. She knows how terrible these situations can be and is sorry for everyone down there, in the entire American coastal South, whoops. She knows.

When that Exxon Valdez thing happened, in Alaska, she basically stopped it from being worse by covering the leak with her hand -- the same hand on which she writes notes, now, for speeches. And then she cleaned it all up with a hockey stick and some cotton balls. So she knows. Maybe, since she knows exactly what is happening right now in the Gulf Coast, she should consider haulin' ass down there to clean this shit up. Either that, or she could behave like an adult when advocating for dangerous practices, on Twitter. Just brainstorming! We don't care for Sarah Palin, is the thing.

That stretch of coastline is full of marshlands, replete with reeds and piles of dead grass that could soak up oil like a sponge. Unlike fish, the area's famous populations of blue crabs and oysters won't be able to outrun the slick. And, precisely at this time of year, the region is host to vast numbers of migratory birds returning from their wintering grounds in South America.

Besides the damage to fish and wildlife, even the land itself could be a victim of the spill. One scientist said if the oil kills marsh grasses, it could eliminate a key natural barrier that keeps Louisiana's precious coastline from eroding.

Scientists said that many species of fish may simply swim away from the advancing oil slick -- although, as it spreads, there may be fewer clean waters to flee to.

For gulf animals not fleet enough to escape, including many crabs, oysters and shrimp, a coating of oil could be toxic. These species are crucial to the region's fishing villages, and the country's seafood supply: At last count, Louisiana fishermen hauled in about 10 percent of the nation's total seafood catch, by weight.

The point, as this Post article notes, and which Sarah Palin may never be capable of understanding, is that it's a lot shittier of a situation when something like this happens in the lush Mississippi Delta or Louisiana or Florida than it is when it's in the rocky, nordic coasts of North Bumfuck, Alaska. And even then, it still screws things up for a generation!

When oh when will Science figure out how to launch massive solar panels into space, so we can be rid of these filthy hydrocarbons? Or can we just launch Sarah Palin into space instead? WE TOTALLY HAVE THE TECHNOLOGY FOR THAT! Anyway.