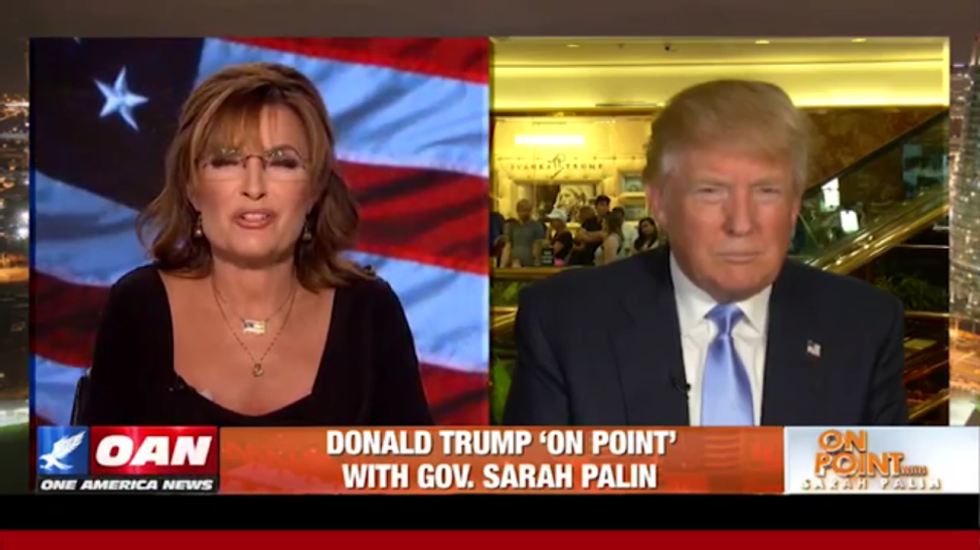 Oh look, there was a Friday evening entertainment shitshow, and it was Sarah Palin interviewing Donald Trump, obviously because she wanted to meet her one of her favorite hero P.O.W.'s. And there's so much goodness in this interview, and so many bowls of word salad, from BOTH of them, but OUR favorite part is when they did Bible trivia. See, the mean liberal gotcha journalists have been doing mean liberal gotcha questions at the Donald, over which verse of the Bible he hearts the best. This is a fair question because A., he is running as a Republican, and it's virtually required for all candidates' REAL running mates to be Jesus, and 2., he said the Bible is his favorite book. Like, he said those words, with his vagina mouth. And also, clearly, he is the most luxurious, terrific-est Christian ever.

Here are the words that escaped from the mouthholes Palin and Trump, on the subject of the Bible:

PALIN: So you get hit with these gotchas, like most conservatives do. For instance, they asking "What's your favorite Bible verse?" And I listen to that going, "What?" Do they ask Hillary Clinton that? What does it have to do with running for the office of the presidency? Is it anybody's business? These personal gotcha questions really trying to get you, us, anybody running for office off game, how are you finding that, and finding a technique to put them in their place so that the American public isn't wasting their time, and they actually get to hear what's important via candidate's message? [Ed. - WHAT?]

TRUMP: Well you saw that, you know I love the Bible. I'm Protestant, I'm Presbyterian. And they were hitting me with different questions, one after another and I, you know, look, I don't know if it's gotcha, it probably is. And then they said, "What's your favorite verse?" and you know, that's a very personal thing. I don't like giving that out to people that you hardly know, and frankly, I don't know if they're fair questions or not fair questions, but you know there are certain things that you and myself and a lot of other people like to keep personal. But I love the Bible ...

IT'S TOO PERSONAL. Hey, I just met you, and this is crazy, but here's Lindsey Graham's number, but not my favorite Bible verse because that's TOO PERSONAL. It's like revealing your plan to defeat ISIS. It's a secret. Shhhhh.

So, clearly, this is Trump's ALL OF THEM KATIE moment, delivered unto us by the very grifter who introduced those words into our political discourse.

Oh, and RawStory points out that Hillary Clinton doesn't really need to answer this question, because this one time on the campaign trail, she walked up to a pastor reading the Bible and asked him what he was studying. It was 1 Corinthians 13. Hillary proceeded to recite it, saying "Oh I know it well." It's a beautiful passage. Trump should look it up. He might want to change a few words around, just fancy it up with some Trump language, of course. Love is patient. Love is YOOOOOGE. It does not envy, it does not boast, it is not proud, oh wait, fuck it, this is a REALLY BAD favorite passage for Trump.