Sarah Palin Literally Just Went Full Nazi. This Is Not A Drill. 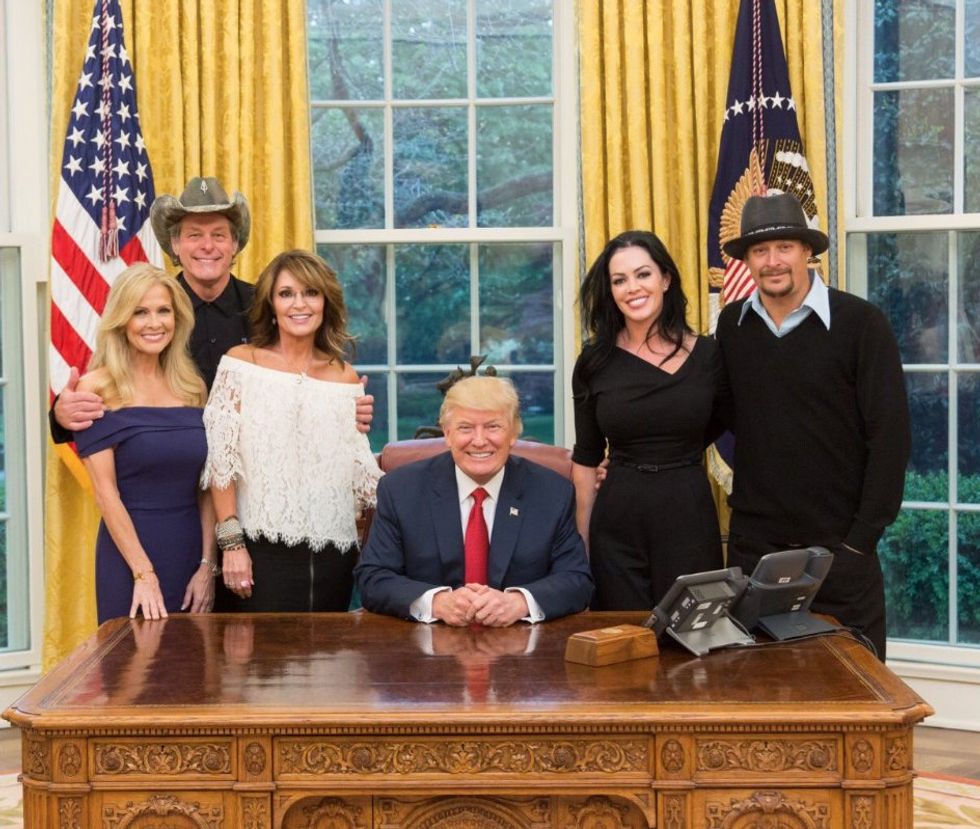 UPDATE BELOW: YoungCons.com, the site that apparently *tricked* poor Sarah Palin into repeating Nazi slogans, is shocked, shocked anyone would see "14 Words" anywhere at all, what are we, crazy?

Sarah Palin, she's this lady. Last time she got any attention at all, she was flying to meet Candidate Donald Trump and spew the worst puke word chunks of her estimably incomprehensible life.

She never got a Cabinet appointment -- not even Department of Setting Polar Bears on Fire -- and she slid back to her Alaska (or maybe Arizona) McMansion to griftalot.

Today, Sarah Palin has taken to Twitter to spout Actual Nazi Words at us, and we don't mean like when the "alt right" kids pretend the "okay" sign is a white power symbol so we will fall for it and they can sue us. We mean:

Are you, Gentle Reader, unaware of the famous "14 Words" that are "the most popular white power slogan in the world"? They are: "We must secure the existence of our people and a future for white children." You will see your friendly neighborhood Nazi's skin emblazoned with "14" (for the 14 Words) and "88" for "Heil Hitler" (the H being the eighth letter of the alphabet). These are not "secret" codes. They are red neon lights coupled with tsunami alert horns.

Just to be sure the former half-term governor had not accidentally simply tweeted the article's automated "tweet" button and ended up endorsing David Duke, we clicked on the tweet button ourself; this is what populated:

Nor does the article itself have any particular 14-word excerpts of Donald Trump's speech to the 23 percent of Poland that approves of him. There is literally no innocent interpretation of Palin's "14 Words" tweet; Wonkette, not being a Republican or a liar, double-checked.

We do not have a joke here at all. Sarah Palin is spouting white power slogans on Twitter. Luckily, some of Twitter was there to make jokes in our stead.

Thank you for your service.

Well, here’s an example of how crazy liberal media can be, how they can twist anything to meet an agenda and to attack people with which they disagree.

We wrote a story about a great speech by Trump using as a headline in our Facebook post “Trump Gives Speech to the People of Poland, Says 14 Words That Leave Americans Stunned.”

What were the 14 words we were referencing?

“Let us all fight like the Poles. For family, freedom, for country, for God.”

A stirring phrase, very encouraging to our ally Poland, something reminiscent of Reagan phraseology.

Wonkette notes: those "14 Words" that were never marked in any way as being worth more love than any other quotes in the piece were in a quote containing 77 words (27 if you just count the second line):

“Let us all fight like the Poles. For family, freedom, for country, for God. God bless the Polish people, God bless our allies and God bless America,” he concluded.”

The Young Cons can play all the 14 Words games they like, and they aren't fooling fucking ANYONE. Except, apparently, Sarah Palin.

Wonkette is ad-free and supported solely by Readers Like You. Sorry, that's all we got, this kitchen floor isn't going to lie on itself.