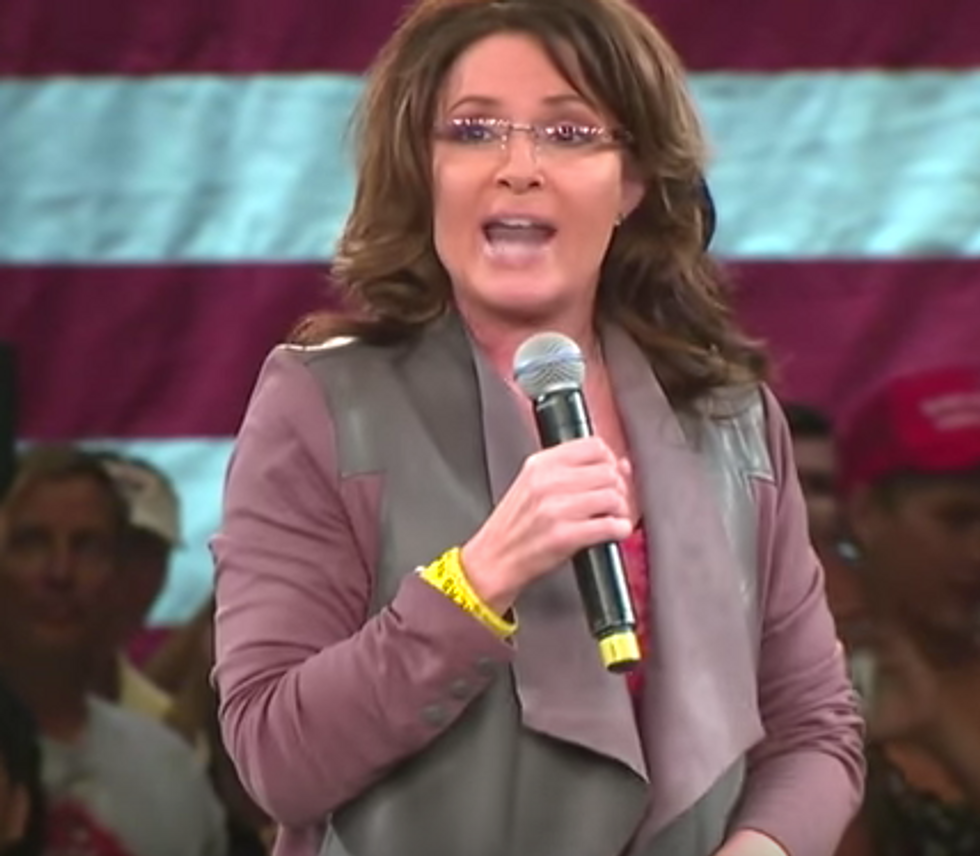 Todd Palin, née Half-Term First Dude née Mr. Mrs. Sarah Palin, had a accident on his snow machine, and it sounded real bad. So bad, in fact, that we interrupted our regular programming, of snorting and snickering at the entire dimwitted drunk-brawlin' Palin clan, to wish Todd a speedy recovery, up there in the intensive care unit in Alaska.

We apologize for the interruption and now return you to WHAT EVEN THE FUCK, YOU SILLY CRAZY DRUNK MOOSE TURD?

Thank you, guys, for your prayers for my husband, who is recovering right now in ICU after a little wreck on a snow machine. So thank you. Big wreck. Thank you.

You're welcome, Sarah. Seemed like the right thing to do. Glad we could put aside our differences for one moment to -- OH GOD THERE'S MORE:

But you know, when real life happens -- right? When somebody is sick in your family, there's an accident that happens, all these challenges, these struggles, in your business, in your family, with your finances, trying to get your kids to be able to afford to go to college -- all this these real life issues that happen, it really puts things in perspective, doesn't it?

And doesn't it make you so appreciate your time? Time is our most valuable resource. It makes me appreciate the time that we have to spend in doing something so worthy, and that's to get Donald J. Trump elected president.

Sure, that's reasonable. When your husband has a "big wreck" and ends up in the hospital, you realize what really matters. For Sarah Palin, what really matters is gettin' her face on the TV one more time before flying home to be with her recovering husband, whose injuries, according to her Facebook, include "multiple broken and fractured ribs, broken shoulder blade, broken clavicle, knee/leg injuries; and a collapsed lung."

But Grizzly Mama had a Trump show to do in Florida, so certainly Bristol could provide adequate tender lovin' care to her laid-up dad until Mom got home from her extra 15 minutes. Bristol works in a doctor's office, you know, doin' whatever medical stuff they let high school graduates do. So she's more than qualified.

However, before returning to Alaska to be with her husband -- and writing that "as his wife and children, appreciate your respect for our privacy during this time" -- Sarah needed to devote some of her precious limited time to nursing the the Constitution back to health from the multiple injuries it sustained:

And what we don't have time for is all that petty, punk-ass little thuggery stuff that's been going on with these quote unquote "protesters," who are doin' nothin' but wasting your time. And trying to take away your First Amendment rights, your rights to assemble peacefully, and the media, bein' on the thugs' side -- what the heck are you guys thinking, media? It doesn't make sense!

It would probably be distasteful for us to mention that, having squirted more than one violent punk-ass from her loins, Sarah Palin should probably be careful with them "thug" stones she's a-throwin'. We wouldn't want to be distasteful. After all this, this is a very harrowing time for the family, and while Sarah used her husband's accident to tell people to vote for Trump, we really should respect the privacy she has requested.

As for impeding the First Amendment right to attend a Trump rally -- and maybe beat the crap out of someone, should the need arise -- the only person who's guilty of that would be one Donald J. Trump. On Friday, his campaign announced that it was canceling a rally in Chicago, "after speaking with law enforcement." Not that law enforcement told Trump to cancel the rally or warned that the threat of all those protesters who don't want to Make America Great Again was an actual security issue, as law enforcement was very quick to inform us. But blaming "thugs" for stealing Trump fans' First Amendment rights by "forcing" him to cancel a rally makes a great story, especially if you are trying to incite violence against protesters. Or the media. Or whoever. You know, hypothetically speaking.

Boy, it's a good thing Todd had that big wreck, huh? To really help Sarah focus on what is important to her, which is, more than anything else -- including, apparently, her seriously injured husband -- getting to hold a microphone in her hand while the cameras are rolling.