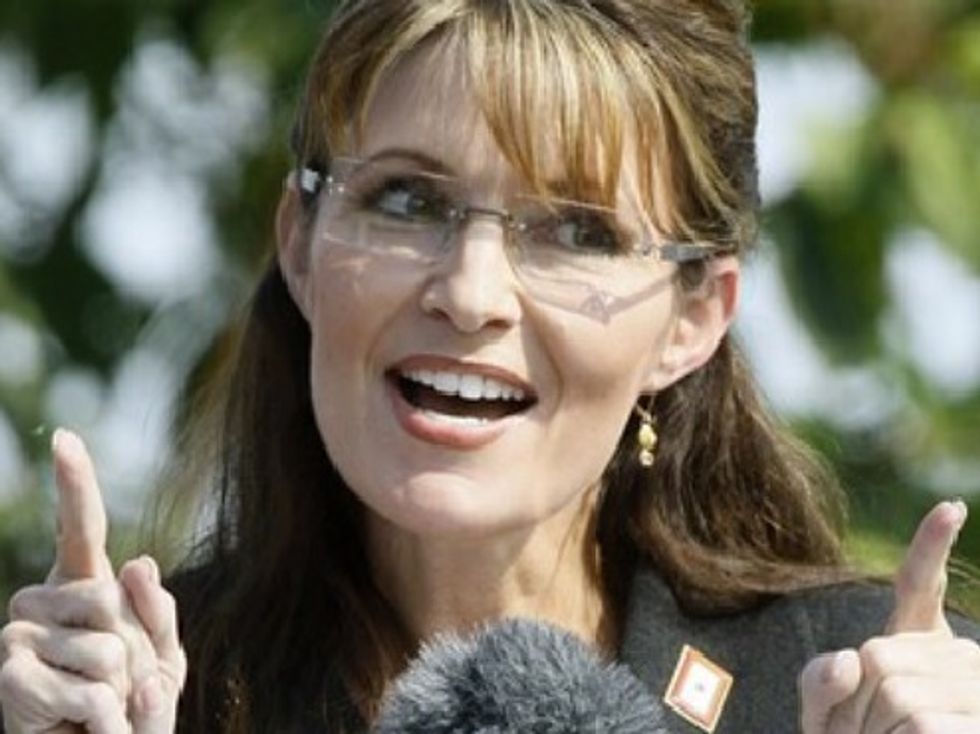 Sarah Palin is about to SPLAIN YOU.

[wonkbar]<a href="http://wonkette.com/599566/half-term-governor-says-half-term-senator-too-inexperienced-to-be-half-term-president"></a>[/wonkbar]Never say that Wonkette is not fair to Sarah Palin. Oh yeah, we are usually making hilarious jokes about how she quits everything and she's a giant grifter and she can't talk good, and maybe if she spent more time up there in Alaska banging Barbie and Ken together in a shadowbox to show Bristol how babies are made ... you get the idea. We slag on the Palins, gleefully.

But Sarah is right about a thing this one time! You see, rapper lady Azealia Banks went on a Twitter rant, now deleted, about how it would be a good idea for a gang of large black men with large black dicks to rape Sarah Palin. That's an absolutely terrible thing to tweet! If you are Doing Sexuals with large black dicks, it needs to be consensual, Official Wonkette Policy.

Here are a couple of Azealia's tweets, and then we will post Sarah Palin's Moment Of Correctness:

What a mouth you have, young lady! According to Mediaite, Banks was mad about a fake article from one of those bad "satire" sites (FUCK YOU, BAD "SATIRE" SITES), which claimed that Sarah said, "Slavery wasn't our fault, because the Negroes liked it." Sarah Palin is crazier than a corn nut in a moose turd, but we are fairly certain she would never say anything like that OUT LOUD.

So here's Sarah, gettin' up on her feminist pedestal and cussin' out the potty-mouth rapper WHO JUST WISHED RAPE ON HER in Wasilla-nesian or whatever language she speaks:

OK, so let's leave aside for this one post how Sarah Palin herself is not really good at feminism, or at knowing what the term means. (We left it aside by writing that sentence and putting links in it, see what we did there?) But her response here is ... coherent and absolutely correct. Who hacked Sarah Palin's Facebook and translated it into English??? Just kidding, Sarah, your post was good. Wonkette means it.

When Oliver Darcy of the feminist Glenn Beck riot grrrl zine "The Blaze" quoted one of Banks's tweets, she attempted to clarify that she didn't mean rape rape, but something different:

Ahem. Well, not to split hairs, but we feel that a group of men banging some sense into that ho kind of sounds like gang rape, so we're still #TeamSarah on this one!

Anyway, Azealia Banks The Rapper sticks her foot so far in her mouth it comes out her ass on the regular, often on Twitter. One time she said of Bill Cosby's rape victims that "Them bitches frontin’ like they wasn’t trying to get some of that pudding pop!!!”

One time she called Perez Hilton a "messy faggot" on Twitter, but said it's OK because "I am bisexual. my brother is trans. My employees are all gay men. .Nothing else to say [sic].”

Oh, and this thing that happened on her Instagram is real nice also too:

A commenter [replied] "Imagine the pain young gay fans feel when they hear the vile things you say,” which curiously set Banks off. She responded with a series of replies that included, "oh well imagine how I wanna spray a gay man in the face with pepper spray every time he calls me a bitch a slut or a hoe. Kiss my ass. Goodnight." and "Keep f*cking with me if you f*cking want to." and "One day your hemorrhoids are going to burst and you’ll bleed to death b*tch." and the most horrifying of all, "Yea keep trolling for d*ck on grindr. You’ll be murdered and stuffed under a truck somewhere soon."

She seems nice! (And disturbed and like she should have parental controls on her social media, maybe.)

[wonkbar]<a href="http://wonkette.com/598026/sarah-palin-endorses-donald-trump-for-emperor-of-alaska-and-also-too-america"></a>[/wonkbar]Oh, and she's a Trump supporter, so she's obviously an ass. Wait a minute, so is Sarah Palin! Maybe Trump can do a beer summit for two of his best celebrity endorsers, and Azealia can say sorry for wanting Sarah to be gangbanged/raped by all the black men and Sarah can give Azealia a copy of the Bible she wroted, and America will officially be Made Great Again, the end.