Sarah Palin Under Impression Somebody Asked Her Opinion On Orlando Shootings 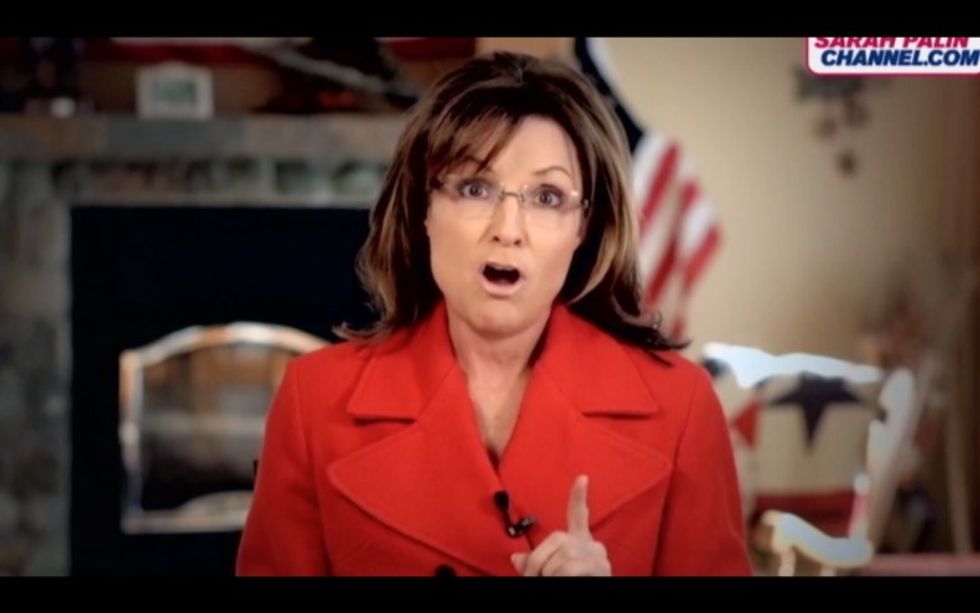 Sarah Palin awakened from her slumber Friday morning and felt unsettled. It wasn't just the rumbling and growling in her bowels, an obvious side effect of the four pounds of moose chili she eated as a midnight snack. It wasn't just that her sexually abstinent daughter Bristol is actually married now and STILL doesn't know how babies are made. How many times does Bristol have to get pregnant before Sarah FINALLY remembers to sit down and have The Talk with her?

No, Sarah was angry because she is a gun-fondling dumbass, and Obama is politicizing (!!!!) the murders of 49 people at a gay club in Orlando, by mentioning guns, and also failing to bomb all Muslims straight to hell:

OBAMA IS A SPECIAL KIND OF STUPID

Enough is enough, Mr. President. There's no "due respect" due you after pulling this stunt.

Oh sweet Jesus. Sarah Palin is calling someone stupid. It's like the pot calling the kettle a half-term Wasilla meth-grifter.

The "stunt" she is referring to is President Obama traveling to Orlando and, aside from meeting with and consoling survivors and victims' families, having the audacity to mention that those affected most deeply by the Orlando mass shooting have been begging him to do something, anything, to reduce gun violence in this country. He scolded limp-dick NRA motherfuckers for refusing to even consider that MAYBE it shouldn't be so easy for any random unhinged asshole to go buy an AR-15. Sarah knows that is wrong, because hey did you hear the shooter was a Muslim?

If the demented Orlando terrorist doesn't represent all Islamic followers, then why do you insinuate he represents all gun owners?

And why, after any shooting, do you always want to take away firearms from the innocent people who didn't do it?

He didn't insinuate any of those things, you fucking moron.

Forget your asinine gun control, do your job and engage in Islamic terrorist control.

Yes, it's a special kind of stupid to demand we explain ourselves. But if you really want them, get ready for our explanations.

Instead of explaining herself, because Sarah Palin wouldn't be capable of stringing a grammatically correct sentence together if her life depended on it, she posted a meme. It is a stupid meme.

[wonkbar]<a href="http://wonkette.com/593976/awww-look-pro-life-ladies-try-to-do-feminism"></a>[/wonkbar]Haha, it is funny because Sarah Palin is actually very anti-woman, and gives no fucks about a woman's actual right to choose, so instead she appropriates the lingo of actual feminists who actually care about all human beings, and turns it into a bloodlust-y NRA wet dream thing about guns. WHAT A FUNNY LADY SHE IS.