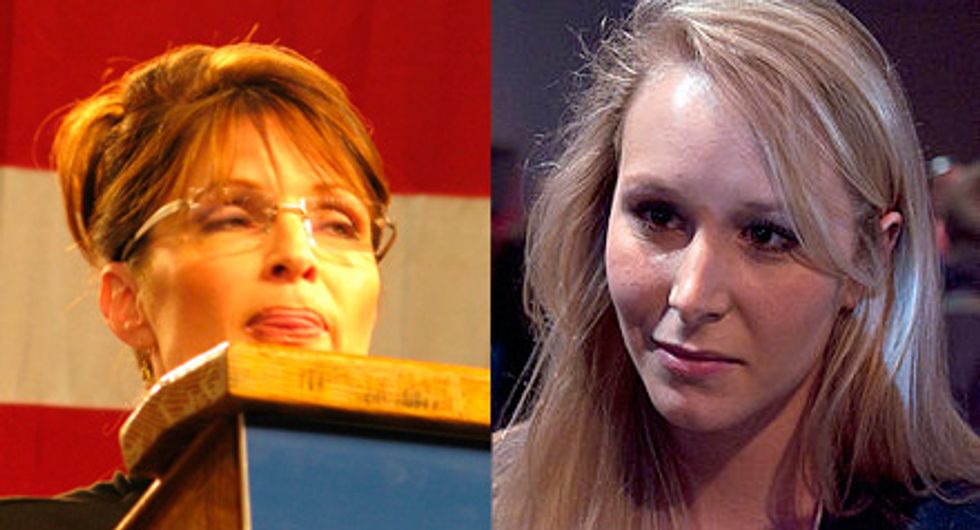 Sarah is singing Adele songs in her brain right now.

Honky Snow Princess Sarah Palin has a moist in her underthings, and it is for a French who is also a lady! Sacre bleu, DONCHA BET? Of course, it's not for a normal French lady like Brigitte Bardot or sexxxy Carla Bruni. Sarah's bone is in the zone for a fascist politician named Marion Maréchal-Le Pen, who is pretty and blonde and hates the Islamics, much like most of Sarah's former coworker gals at the Fox News:

I have a political crush, but one I couldn’t vote for today – because she ran for office in France.

Sarah's ghostwriter drones on and on at the Dead Breitbart Home For Really Dead Breitbarts about ooh, Marion is so hot, and aah, her auntie Marine Le Pen (the head of the insane far-right French National Front Party, who once "saluted" the acts of a far-right Frenchie bigot who shot hisself in the head at Notre Dame cathedral to Make A Statement about gays) is also pretty fuckable for an old froggy lady, also too.

Moosediddles The Clown's argument for why these broads are so great seems to be they replaced anti-Semitism with Islamophobia for the French wingnuts:

For some time now, I’ve admired the bold style of Marine Le Pen, who wrestled control of the leadership of her populist party in order to purge it of any trace of anti-Semitism, which it had unfortunately been tainted with in the past. But I’m especially impressed with the courage of her young niece who is a devout Catholic and unapologetically pro-life – not an easy thing for a politician to be in a country that’s aggressively secular.

More importantly, young Marion Maréchal-Le Pen is unashamed to champion France’s Judeo-Christian identity and heritage as something worth preserving and fighting for. She publicly proclaims it, setting an example for even American politicians to be so bold. With France (and indeed all of Europe) caught up in an existential crisis against radical Islam, these are the sentiments they need in their leadership.

Judeo-Christian? Yeah, that means "Christian." And as far as removing all those "past" taints, that taint is in Marine Le Pen's dad's mouth.

The specific thing the younger Le Pen does that gets Sarah's undercarriage a-sizzlin' is that she "declares that France is not an Islamic land, but Muslims are welcome to become French citizens 'only on condition that they bend to the customs and the way of life that Greek, Roman and 16 centuries of Christianity fashioned.'" So it's fine if Muslims want to live there, as long as they're willing to become European Christians, we guess.

Here is more trivia on the gal Sarah wants to scissor-finger:

Even more rightwing and socially conservative than her aunt, Marine Le Pen, who heads the party, she is closer in many of her beliefs to her grandfather, Jean-Marie Le Pen, who co-founded the Front National in 1972 and led it to become the most successful far-right party in western Europe. [...]

Her political opponents say she is haughty, snobbish, dangerous and that her far-right rhetoric against immigration stigmatises Islam and wider French society.

“She is the youngest MP in parliament and yet she seems to have this disdain towards the rest of us as if she belongs to a superior race,” François-Michel Lambert, Green MP for Bouches du Rhône, told the Guardian.

And she hates gays too, just like Aunt Marine! Somebody serve Todd Palin with divorce papers, Sarah's running away to France to eat croissants in bed with Marion in between bouts of lesbo-ning!

Anyhow, Marion's jingoistic anti-Muslim hatred is all just common sense folksy conservatism to Sarah, who doesn't seem to believe Syrian refugees exist. It might help if she would visit a newsstand and read "ALL OF THEM, KATIE," but we know that won't happen:

We don’t have a handle on this situation now, but our insane politicians want to import more so-called “refugees.” Forgive me if I’m a little skeptical about the refugee part. We just learned that ISIS is forging fake Syrian passports, and we already know that two of the Paris attackers entered Europe posing as refugees. We have no way to vet anyone coming to our country. This is why we need to seal the borders.

Two things: First, we have a vetting process in the United States that can take up to TWO YEARS. Second, if refugees are such a huge threat, then why are the actual leaders of France (as opposed to these insane fascists) continuing with plans to accept 30,000 refugees next year, even after Paris was attacked? Why is hot sexxy Canadian Prime Minister Justin Trudeau personally greeting planeloads of refugees arriving in his country?

Haha, that's easy. It's because France and Canada are not jumpy, ignorant pusswads like Republican American wingnuts and the fucked up French racist movement represented by Marion Maréchal-Le Pen, whom Sarah Palin wants to gay marry with her mouth.