Sarah Palin Will Save Your Fetus, If You Pay Her 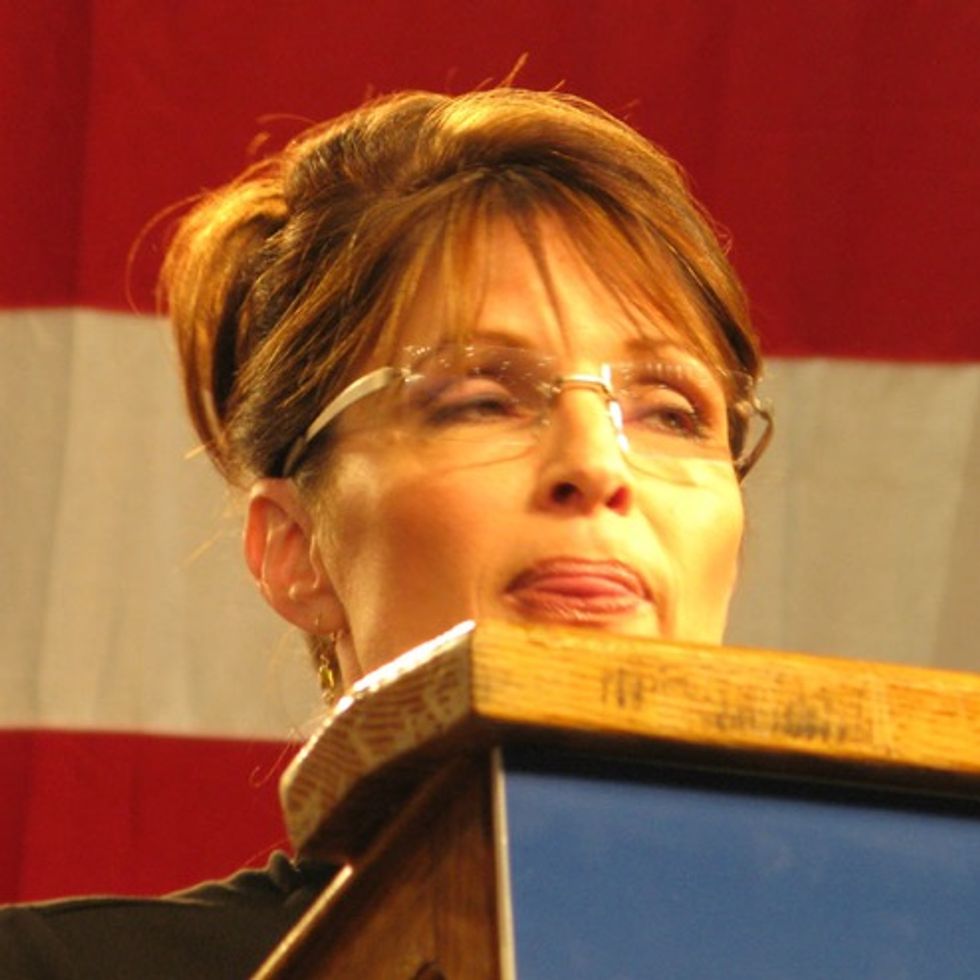 You may have heard that the Republicans this year are all about beingfiscally conservative and getting back to our "original Constitution," which means that there will be more misinformed, spittle-drenched rants about taxes and deficits and fewer misinformed, spittle-drenched rants about the gays and the unborn. But never fear, they still care about that stuff! In fact, sometimes they care about it so much that they go "off script," as when Sarah Palin violated some ghastly megachurch's tax-exempt status and talked about how you need to vote Republican to stop abortion, forever. She did this because this is an issue she feels very strongly about, and she wants to keep it in public debate, even if that isn't the best political strategy! Oh, wait, no, she did it because some anti-abortion group paid her $100,000 to do it.

Your Wonkette of course uses the Homeric epithet "snowbilly grifter" for Sarah Palin constantly, but sometimes even we can forget the extent to which her "political advocacy" is a front for a series of crass money-making schemes.

Sarah Palin starkly framed the midterm elections on Tuesday as a choice between political candidates who favor a "culture of life" and those on the opposite side of the issue wanting to implement "a culture of death."

Palin, delivering a paid speech to an anti-abortion group in Texas, claimed that President Barack Obama oversaw "the biggest advance of the abortion industry in America" by signing landmark health care reform legislation that, she said, allows for taxpayer-funded abortions.

"That's why it's essential that we use the 2010 midterms to elect a Congress that will make undoing the damage of Obamacare its first priority," she told an audience of more than 2,500 gathered at First Baptist Church of Houston, a megachurch on the city's west side.

Of course, the pro-choice folks were pissed about the health care reform precisely because the administration created all these hoops to make sure that no federal money was spent on abortions, specifically to not piss off pro-life Democrats. Apparently, they shouldn't have bothered, and should have just instituted a "BIG $$$ FOR YER FETUS" program instead, because the Republicans are going to complain about it anyway!

Anyway, about that "paid speech" angle:

She praised Texas' Republican Gov. Rick Perry for his ferocious opposition to all things Washington and called Obama "the most pro-abortion president to ever occupy the White House," reprising a line from similar speeches she has delivered across the country this year -- sometimes for as much as $100,000 a pop.

$100,000! You know, some might look at that figure and just gasp and tut and shake their heads, and contemplate a time when people involved in politics viewed activism as an opportunity to make the world better, or advance the interests of their home region or demographic group, or gain access to the levers of power. Such a person might deem the idea of "speech-giving for hire" appalling! But we just find it ideologically consistent. After all, when your entire political philosophy is based on the idea that government and electoral politics are inherently corrupt and pointless, and that "entrepreneurship" ought to be everyone's goal, then "public service" is sort of a silly concept, isn't it? Being a businessperson is better than being a politician, so why not run your political activism as a business? It's the American way!

The real takeaway here, of course, is that Sarah Palin will promote your pet cause, for money. Do you oppose a local rezoning plan? Do you want a new four-lane highway carved through a park to serve your exurb? Are you interested in getting government regulation off the back of your very specific industry? Just write a large enough check, and Sarah Palin will be happy to inform the country, via Facebook, that Real America doesn't want a shopping center with inadequate parking at the intersection of Moravia Boulevard and State Route 2/needs Interstate 920 built to relieve congestion/doesn't want the metal-polishing industry's toxic waste disposal practices to be judged by some meddling "extreme greenies" in Washington.

Anyway, like a lot of crazy people, Sarah Palin is convinced that she is being watched by a million unseen eyes and judged, always judged.

The event was open to reporters and television cameras -- which were only allowed to film the first few minutes of her appearance -- but Palin warned that "embeds" might be lurking in the church, planning to secretly record her speech and distort her remarks the following day on the internet.

We here at Wonkette are proud to have ignored her words entirely -- after all, why bother focusing on a script that she's being paid to read? -- and have distorted her underlying motivations instead. [CNN]