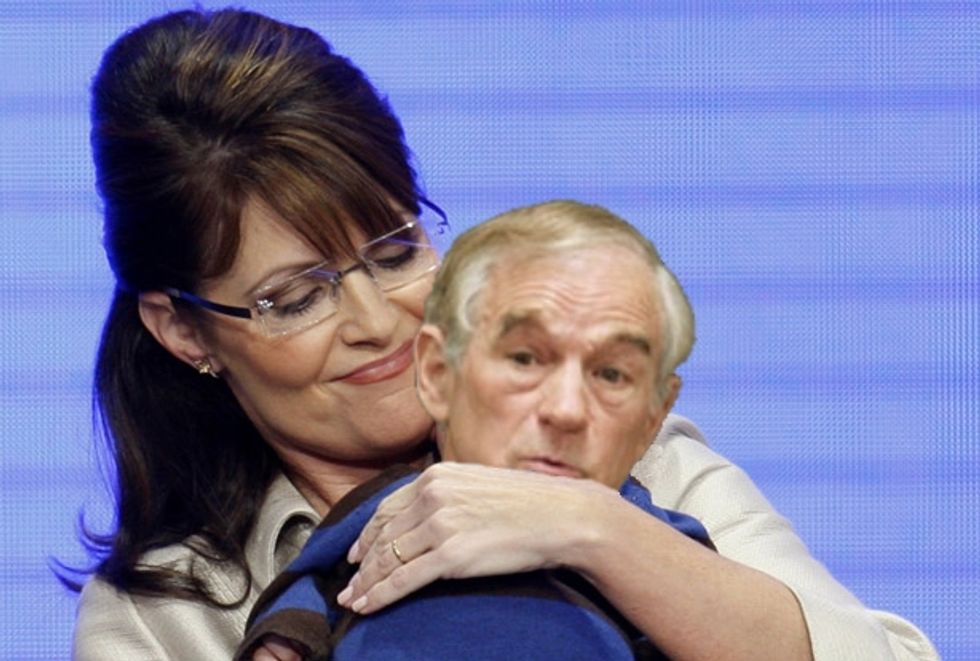 The Virgin Palin, Our Lady of Eternal Anger, gave birth to the New Jesus at some point last year -- or not, who knows, and now Andrew Sullivan just cares about Iran (which is a good thing!) so we'll never find out the truth -- and ever since it has been both a Cardinal/Venial Sin and Sharia Law that no mortal shall "desecrate" an image of the Sacred One ... no one but Sarah Palin herself, because Allah both allows and encourages the use of the Holy Infant as a cheap political prop as long as such cruel hackery is performed by the Virgin Palin herself.

Palin's fury was such, when she found out some blog "on the Internet" had combined a picture of her cradling one of her Magic Babies together with a picture of her Jedi Master, some dingbat old radio talk-show clown in Alaska, that she did verily send her dumbest disciple, "Brother Meg," to start a Jihad against the Entire Internet.

But we know what happens when a fear-and-anger crazed Snow Witch starts a vain war she can never hope to win: The Internet Strikes Back.

Which is to say, Palin basically poked a stick in the world's largest beehive filled with cheap & tireless insanity, and the SomethingAwful.com goons have unleashed a pack of Photoshop Dogs From Hell to make the most incredible collection of Sarah Palin Desecration Images in the History of Time, the end.