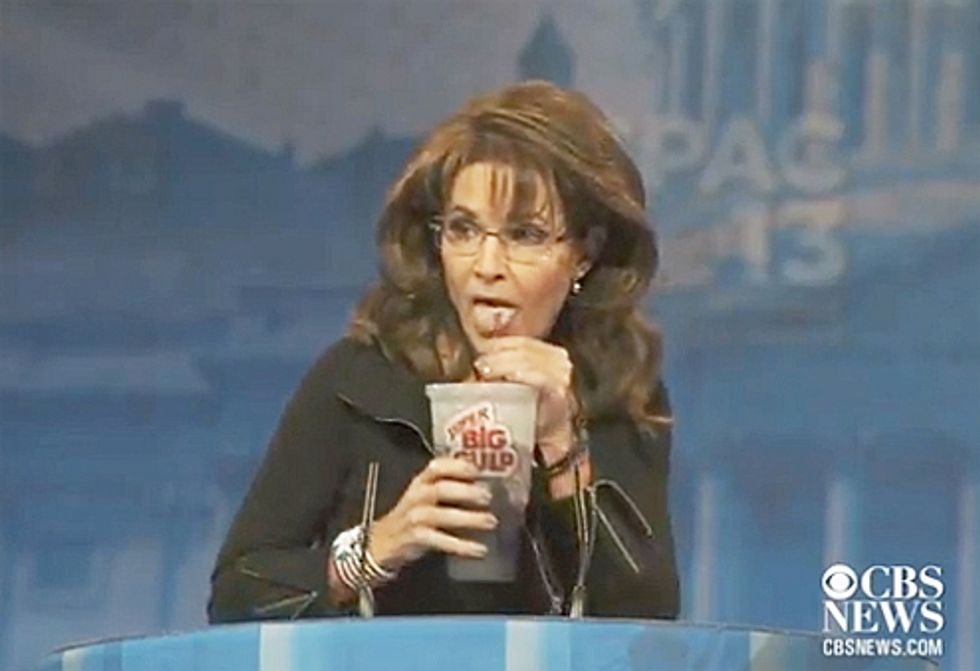 Ready on day one

Just after Donald Trump was (gulp) elected, we all orgasmed in horror when Sarah Palin's name was floated as a possible secretary of the Interior. You know, just in case Ammon Bundy's not available. A long time ago, she said she'd like to be at the Department Of Energy, because, quote, "energy is my baby." Also too, last year, Donald Trump said he would totally tap Sarah Palin, and we're pretty sure he was talking about for his cabinet, and not in a vagina sex way.

But now there is a scoop in the internet that Palin's definitely been on the phone with the Trump transition team, saying "Oh yeah, also too, I could maybe be a Mama Grizzly Cabinet Member, long as I don't have to do much and can quit, oh, I'd say, halfway through." The scoop doesn't say which position she's in the mood to quit, specifically, but reports that her son-in-law Dakota Meyer posted a thing on his TwitFace, a video about how maybe she'd like to quit doing something for the veterans. We're just gonna trust NBC when it says that exists because we have more important things to do in this post than watch a fawning video about Princess Snow-Grift on Dakota Meyer's FaceStagram.

Instead, we'd like to encourage the president-elect to #DrainTheSwamp and think outside the box, by creating a whole new cabinet position for Our Sarah. Why give her a real job when she could instead do something she really loves?

Some suggestions for possible cabinet positions:

OK, good job, Wonkette! We made up some good ideas! Now it's your turn to make up cabinet positions for Sarah Palin in the comments, which are not allowed. Maybe we will pick our favorites for a contest, maybe we won't!