Sarah Palin Yelling At Some Blog Now, Because Of Lil' Trigger 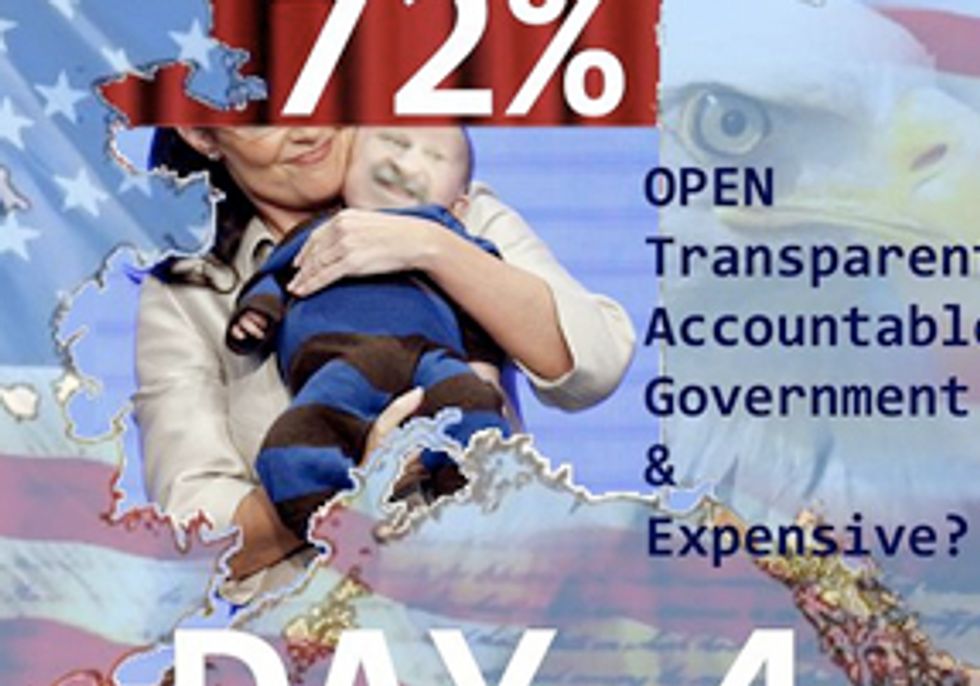 Famous bad mother Sarah Palin, hot off her successful campaign to fire David Letterman, from television, isnow yelling about how some other random person hates or rapes her children. See that photoshop up there of Governor Palin with Bristol Palin's child, Trig? We thought "Verne Troyer" too, but no, it is the head of conservative Alaskan radio host Eddie Burke, who is in love with Sarah Palin. The terrifying graphic is the work of "the liberal Alaskan blogger, Celtic Diva," who earlier this month pushed some other story about Todd's snowmobiling clothes. Now Palin has denounced the blogger through her evil spokesperson Meg Stapleton, who released a statement saying, "The mere idea of someone doctoring the photo of a special needs baby is appalling." Oh.. oh MEG.

"Recently we learned of a malicious desecration of a photo of the Governor and baby Trig that has become an iconic representation of a mother's love for a special needs child," Palin spokeswoman Meghan Stapelton said in a statement provided to CNN. "The mere idea of someone doctoring the photo of a special needs baby is appalling."

Stapelton also suggested President Obama should speak out against such behavior from liberal activists.

"Babies and children are off limits," She said. "It is past time to restore decency in politics and real tolerance for all Americans. The Obama Administration sets the moral compass for its party. We ask that special needs children be loved, respected and accepted and that this type of degeneracy be condemned."

HAHAHAHAHAA. Yeah c'mon Obama, what the hell man, some lady in Alaska photoshopped a radio host's head onto one of ten million photos of Trig being used as a campaign prop, when will you condemn these... these Degenerates. A DESECRATION! This photo "has become an iconic representation of a mother's love for a special needs child," damnit! It's art, you fools! Art! Really... really good photo we got goin' here. National fucking treasure.

Like most things, however, Palin's statement is hypocritical, because she, too, has photoshopped images of beloved earth-king Trig in the past. Check out this "real-life photoshop," where she turned Trig into an elephant. Was she insinuating that this special needs child could be an African monster?