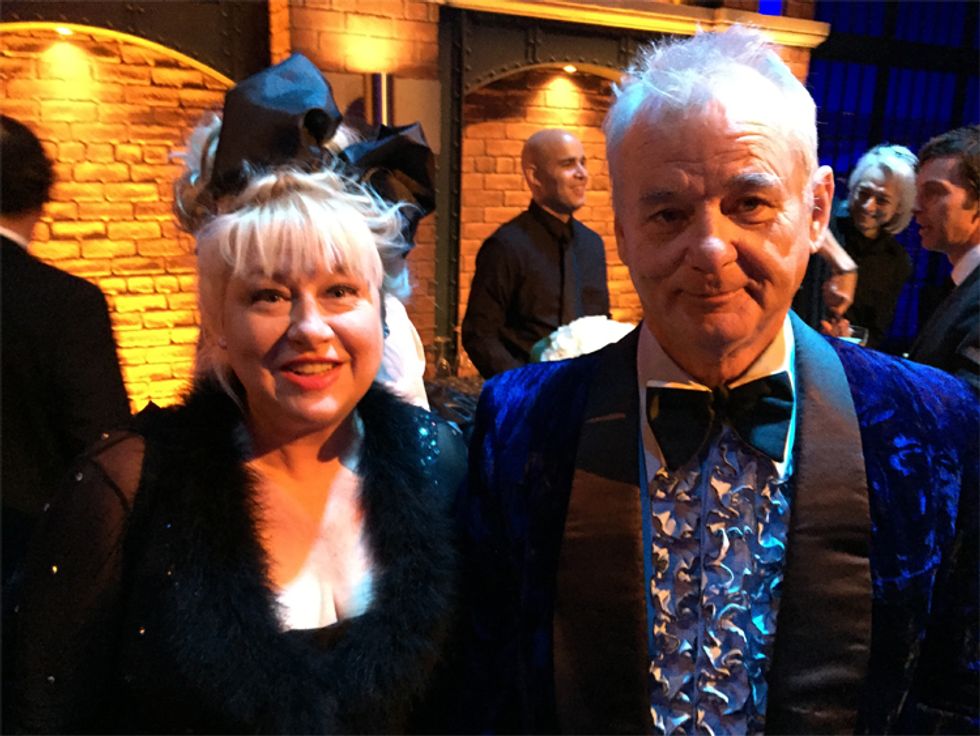 Like many Americans who now regret it, we watched the great big Saturday Night Live 40th anniversary program Sunday, and we kept looking over at our 17-year-old son and explaining that the show didn't so much suck as that it was just trying to recreate the feel of every single sketch that ran after "Weekend Update" for 40 years. And of course, we kept an eye out for former cast members who didn't quite make it onstage, like Sen. Al Franken, who was definitely there, and Victoria Jackson, who was nowhere to be seen. WELL! Turns out that V-Jack was there all right, but she was shunted off into the overflow room, not given a seat in the studio audience. She's not sure why that happened, but she bets it's maybe because she's a Christian who stands up for Traditional Marriage! Or maybe some young'un on the production staff just confused her with another crazy blond lady from the internet and worried that she'd storm the stage, grab the mic, and shout that America would never submit to Muslim rule.

Honestly, V-Jack says she just doesn't know. In a post on her website, she said that it might just have been a mix-up in the show planning:

I was placed in an “overflow room” but didn’t pay much attention to it until Robert Smigel came in there for some food, saw me, and asked me why I was sitting there for the past 2 1/2 hours. I told him that the usher looked at my bracelet and told me to sit here.

Jackson said that tabloid TV show Inside Edition (just don't call it that around Bill O'Reilly) exaggerated when it said she was excluded from the auditorium because she was a conservative. On the other hand, she notes,

Inside Edition also left out the part where I said that several people in the celebrity crowd whispered to me that they share my political views…and that I think it’s interesting that they had to whisper. Fear of Blacklist? Freedom of Speech? It used to be cool to disagree with the Government, what happened? Why is Obama’s Administration the only one that is off-limits to questioning?!)

Jackson ultimately said it was all a mystery:

Did Lorne Michaels’ beautiful 20-year-old-assistant make a mistake and hand me the wrong bracelet? (Bracelets were handed out telling the ushers/security team which room you were assigned to). Was I blacklisted for disagreeing with the President/media’s ideology? Was it because I am a Christian? Is it because I believe in the Biblical definition of marriage and publicly spoke out against homosexual themes in prime time TV shows? Is Lorne ashamed of me? What do you think?

Ooh, ooh, I know! I think you're a victim! It's been your freaking job description since 2009!

So, yeah, she's torn. After that post ran Monday, Jackson was becoming more persuaded that maybe she was in fact a victim and speculated on a radio show that her opposition to homosexxers led her to be left out:

she noted that there were "token" conservatives in the audience, including Sarah Palin and Donald Trump, and she further speculated about her exclusion from the main room: "The only thing I can think of is the gay thing, because it's such a strong movement. Maybe Lorne was like, 'Where do we sit Victoria?'"

Or maybe it had something to do with her erratic behavior, like that time last month when she tried to take the stage, uninvited, at a rally sponsored by Muslim students at Vanderbilt University. After the organizers said no thanks (censoring her!!!), Jackson started shouting "Freedom of Speech!" while holding up a sign saying "Ban Sharia." And then she and a friend sang Jesus songs to the departing crowd. So maybe, just maybe, that might have been on the minds of the show runners. It's just a theory we're putting out there.

Also, in other V-Jack News, Victoria has completed the polished version of her sure-to-be-a-hit song, “There’s a Muslim Living in the White House.” We shared a short teaser version of it with you a while back, and now, here's the whole glorious finished mess, which went online earlier this month:

Who knows, maybe the secret cabal of Muslims that is now running the country forced SNL to relegate Jackson to the overflow room because of that. We bet that's it! Or hell, maybe someone saw the professional editing of this video and just wanted to keep her far, far away from the studio's control room.