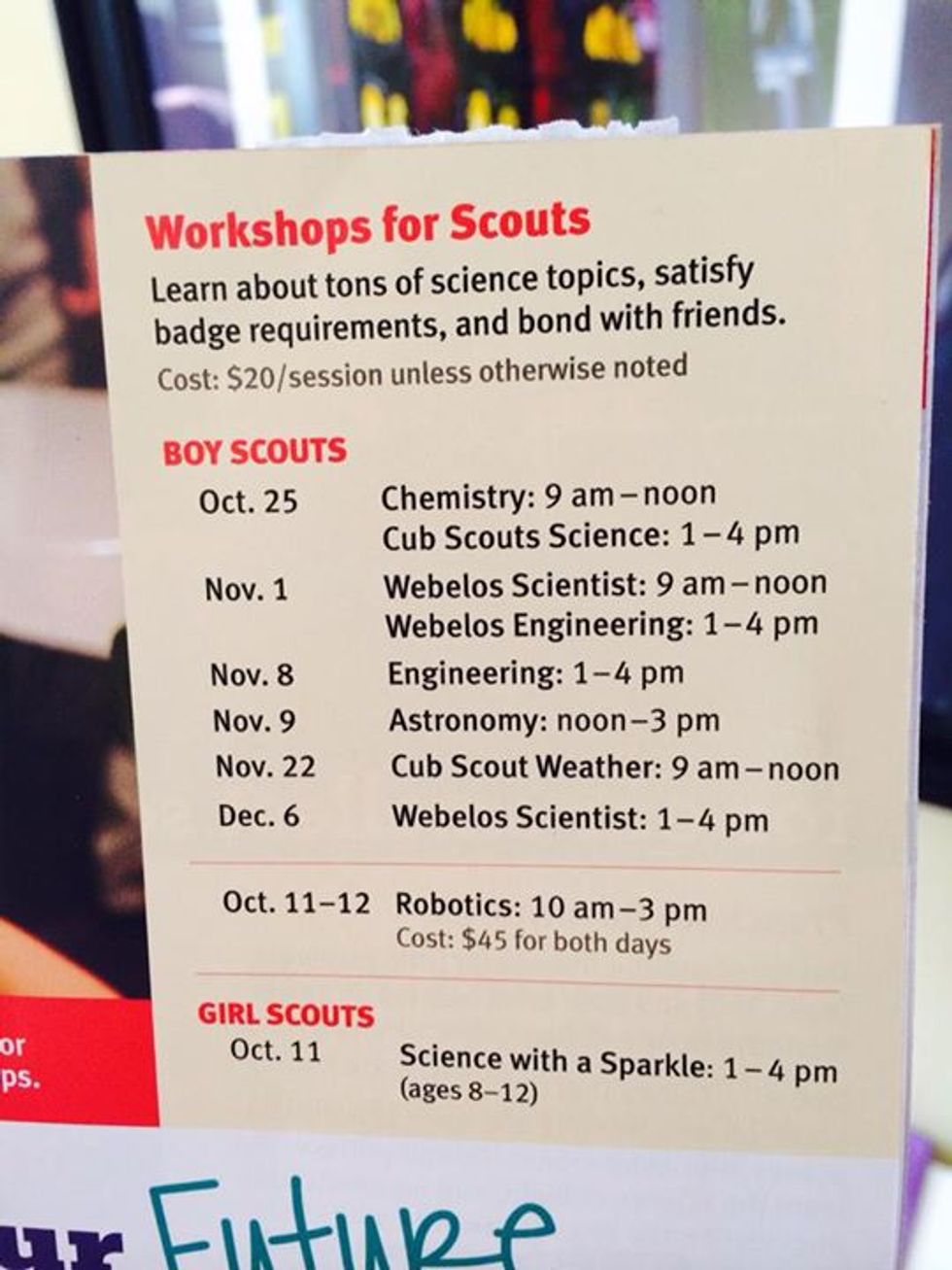 UPDATE: Carnegie Science Center has responded; see end of post. You know what kids love? Kids love science! Science is exciting, and it builds critical thinking skills, and it's actually more than just a little bit fun if you have an engaging teacher and cool things to do! And if you're a girl in Pittsburgh, you can actually get your Girl Scouts science badge at the one solitary science workshop that the Carnegie Science Center offers, which is available on just one day, which... hey, what's the freaking deal here, Carnegie Science Center? Looks like you have loads of science workshops for Boy Scouts at different levels of scouting, and one lousy workshop for girls?

Fine, what will we learn at this workshop? The boys have some general science workshops for each age group and then additional stuff like a weather workshop, or for Webelos, an engineering workshop, or for older scouts, there's chemistry, engineering, and astronomy, though it looks like Robotics got canceled. Still, we bet that since the Girl Scout workshop is the only one available, it has a whole bunch of stuff crammed into it, to get girls excited about science, right? RIGHT?

Science With a Sparkle

Prepare to be dazzled! Dive into chemistry and learn how science relates to health and beauty products. Become a cosmetic chemist and concoct your own creations to take home.

It's as if a million nerdgirls cried out, and were silenced.

Carnegie Science Center, you fail hard. Now, we are willing to give you a teensy bit of benefit of the doubt as far as the number of classes go. Maybe Girl Scouting in Pittsburgh just doesn't have the numbers of participants that Boy Scouting does. And yes, you do have a few other science programs aimed at girls, which aren't restricted to scouting, so there's that, plus a page listing external websites, for outreach. And those science sleepovers are a nifty idea, too.

But... makeup? Mortar-flickin' makeup is the focus of your science workshop for Girl Scouts? At a time when one of the biggest topics in science education is how to make science interesting to girls, and careers in Science, Technology, Electronics, and Math (STEM) more attractive to young women, you're offering MAKEUP? Look, we won't even ask you to join the 21st century all at once -- but could you at least try to emerge from 1958? Shoot for the 1980s at least. Sally Ride was pretty cool, after all.

Get your act together, Carnegie Science Center. You're smart people, and you can do a lot better. We bet there are even some lady scientists in the Pittsburgh area you could talk to, if you just tried.

UPDATE: Carnegie Science Center has posted a response on their Facebook. It begins with an explanation that sounds like what we had guessed -- part of the disparity is that there just hasn't been much buy-in from area Girl Scout troops:

Today, thanks to your comments, we get to talk about one of the most important issues to us: Girls in science.

Encouraging girls to participate in science is deeply important to us. In fact, that’s the mission of our Carnegie STEM Girls, a Science Center department devoted specifically to programming for girls to get them excited about science and considering careers in science, technology, engineering and math.

Many of you noticed our Scout-specific programming and offered valuable comments and suggestions.

We understand your frustration and would like to offer some background:

Regarding Girl Scout-specific programming, we have struggled when it comes to enrollments for our Girl Scout programs. In the past, we have offered engineering, chemistry, and robotics programming for Girl Scouts. We created programming to go along with the new Journeys that Girl Scouts use. Unfortunately, no troops signed up for these. The programs that consistently get enrollments are "Science with a Sparkle" and our Sleepovers at the museum.

So part of it is good old free market, and we can see that -- the emphasis on makeup still grates, and we're pretty sure that there are other options that the Science Center could explore as well. But if scouts (or their parents, really) don't sign up, then those are the breaks. The post also notes that the Center is "happy to book private workshops" if Girl Scout troops want to work on a particular topic, and invites readers to offer "thoughtful ideas and work to better our Scout programming."

Beyond that, they also note that Carnegie Science Center offers other outreach to girls -- as we noted, briefly -- and offered some details:

In the meantime, we need to set the record straight: At Carnegie Science Center, we’re constantly talking about ways to encourage girls to participate in science. We want girls to know there is a place for them in science and to inspire them to overcome the damaging stereotypes that still exist.

Here’s how we’re working on that: Our programs for girls -- such as STEM Stars, Tour Your Future, and CanTEEN -- can be found here: http://www.carnegiesciencecenter.org/stemcenter/carnegie-stem-girls/. Those programs give girls the opportunity to see female STEM professionals at their worksites, improve academic achievement, and learn about women making strides in STEM.

All in all, it's a pretty good response, and a pretty responsible answer to what looked like some ridiculously gender-biased programming. Yr Wonkette is still less than thrilled about that "Science that Sparkles" class title, which reeks of the Pink Aisle in the toy store, but it's also a relief to see that Carnegie Science Center takes this stuff seriously, and that they're willing to take criticism seriously. Well PR'd, Carnegie!