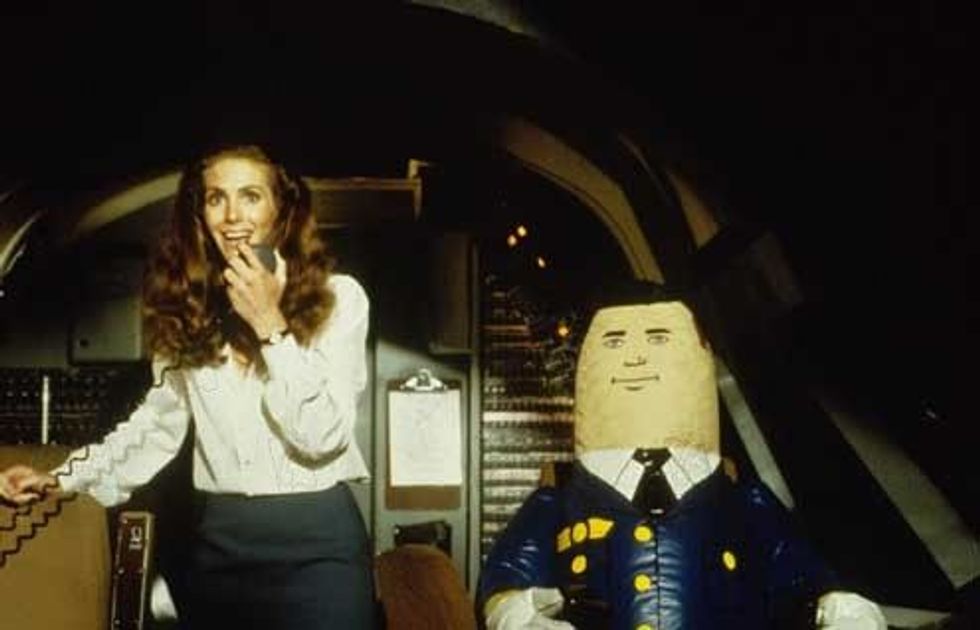 Did you happen to hear that in the midst of yet another very bad day for Miffed Romney, Egg Romney's plane had to make an emergency landing? We are not saying they faked it or that it was suspicious at all, we're just sayingwe saw Bob Roberts. We for one are very, very happy that Egg Romney is all right, and anybody musing otherwise in the comments will be murdered (from commenting). You know the Rules! Anyhoo, we note this because Miffed Romney was in Los Angeles, hoovering up a little more Koch money or something, when he had the kind of Deep Thought that should make grumpy loser Herman Cain shut up once and for all. Ladies and gentlemen, Miffed Romney is a Man of Ideas!

Romney’s wife, Ann, was in attendance, and the candidate spoke of the concern he had for her when her plane had to make an emergency landing Friday en route to Santa Monica because of an electrical malfunction.

“I appreciate the fact that she is on the ground, safe and sound. And I don’t think she knows just how worried some of us were,” Romney said. “When you have a fire in an aircraft, there’s no place to go, exactly, there’s no — and you can’t find any oxygen from outside the aircraft to get in the aircraft, because the windows don’t open. I don’t know why they don’t do that. It’s a real problem. So it’s very dangerous. And she was choking and rubbing her eyes. Fortunately, there was enough oxygen for the pilot and copilot to make a safe landing in Denver. But she’s safe and sound.”

We would like to note for just a second that oxygen feeds fire, and maybe if the window had opened Egg Romney's plane would have asploded! Whatever, we are not a scientist. Maybe the plane wouldn't have asploded, and all planes should come with windows that open. What on earth could go wrong?