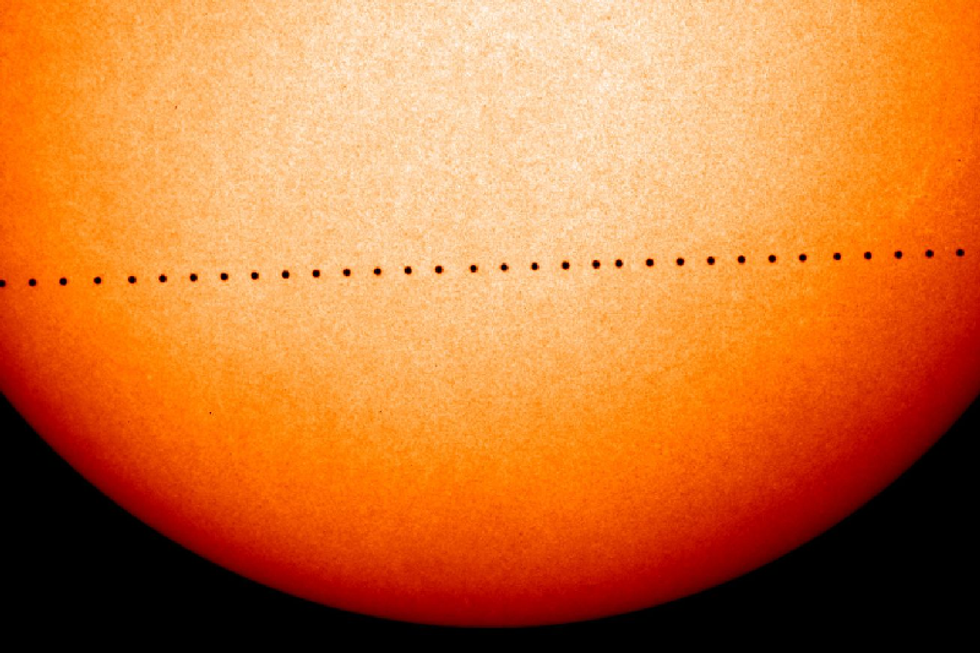 A seriously cool and rare astronomical event for you Monday morning (sponsored by Wonkette, sure, why not): The planet Mercury's orbital path will take it directly between Earth and the Sun, a phenomenon called a "transit." How rare? Only happens about 13 times a century. The last time was in 2006, as captured in the time-lapse photo above from NASA.

Do we need to tell you people not to look directly at the sun because it could damage your eyes? We just did! No, not even with your phone camera, dummy! Besides, Mercury will be too teensy to be visible to the naked eye anyway; you'll need a telescope or binoculars fitted with a proper solar filter. Or, for Safe-n-EZ viewing, why not just watch the fun at the European Space Agency's website? NASA TV will also have a live program on the science of the transit from 10:30 to 11:30 a.m. EDT.

The transit begins just after 7 a.m. EDT, so people on the Left Coast really should not bother trying to view it outside at 4 a.m., and those in the so-called "Mountain Time Zone" -- if it exists at all -- will likewise have to view the first bits (really all of it, for safety) online. Not an early riser? Aware that you didn't even see this darn post until you stumbled out of bed at 9:00? No problem -- the transit lasts about seven hours in all, sort of like election night coverage only without Chris Matthews saying he likes how nice and round Mercury is. Here is a NASA animation of the path Mercury will take:

Also, how about some Science Explanation Time from Vox?

Why so uncommon? For a transit to occur, the sun, Mercury, and Earth all have to line up directly. But Mercury's orbit is inclined by about 7 degrees compared with Earth's. So there are only two spots where the two planets could conceivably line up with the sun -- the places where Mercury crosses the Earth's orbital plane:

Earth lines up with these intersection spots around May 8 and November 10 each year, give or take a few days. If Mercury, which takes 88 days to orbit the sun, is also wandering through at the same time, a transit occurs. This happens once every seven or eight years.

Transits of Venus are even rarer; that sneaky booger's inclination and orbit are such that there have only been eight of them since the invention of the telescope. The last two were in 2004 and 2012, and if you missed 'em, you'll have to wait until 2117 and the year 2125 (if Man is still alive...).

No, there's nothing political about Mercury's transit of the Sun. Except that it would be much classier if Donald Trump were arranging it. And some idiot on YouTube is guaranteed to insist it disproves global warming.