Science Nice Time: Navy Honors Sally Ride With A Research Vessel. Sadly, It Is Not A Spaceship 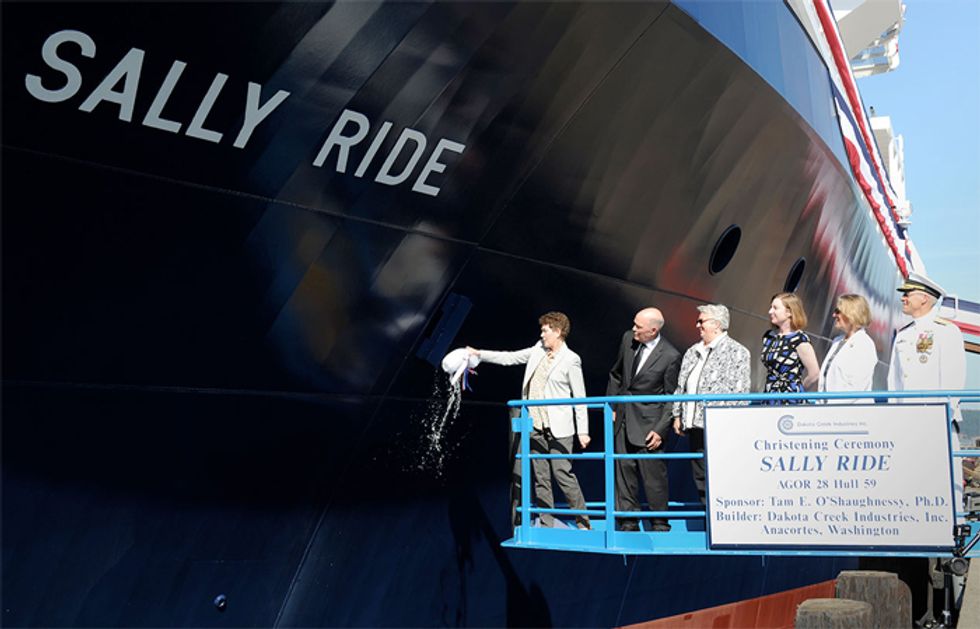 Here's some niftysciencey Nice Time for you people on a Monday when the world is looking a tad bleakish:

Tam O'Shaughnessy, Ride's life partner and successor as chief executive officer at the science education company Sally Ride Science, broke the traditional champagne bottle across the bow of the R/V Sally Ride during the naming ceremony held at the Dakota Creek Industries shipyard in Anacortes, Washington on Saturday

Also at the christening ceremony were Sally's sister, who is actually really named "Bear Ride," and how did we never know that before, as well as former astronaut Kathryn Sullivan, who was the first American woman to do a spacewalk, and is now the administrator of the Global Warming Hoax Clearinghouse, aka the National Oceanic and Atmospheric Administration (NOAA). And just as Sally Ride was our first female astronaut, the ship is the "country's first academic research vessel to be named for a female scientist and explorer." And we won't even spoil the moment by dwelling on the fact that in 2014 it's still possible for someone to be the first female anything.

The R/V Sally Ride is owned by the Navy, but will be operated by the Scripps Institution of Oceanography, UC San Diego, and based in San Diego Bay. It will be a "seagoing laboratory supporting research and education," using "mapping systems, sensors, and profilers that will investigate features from the seafloor to the atmosphere." It's also a really pretty ship:

We wish the future crew of the R/V Sally Ride smooth sailing and many discoveries, and also, since we're making wishes, we hope they have a future of adequate research budgets, even if they insist on finding more evidence that the Earth is more than 6,000 years old.