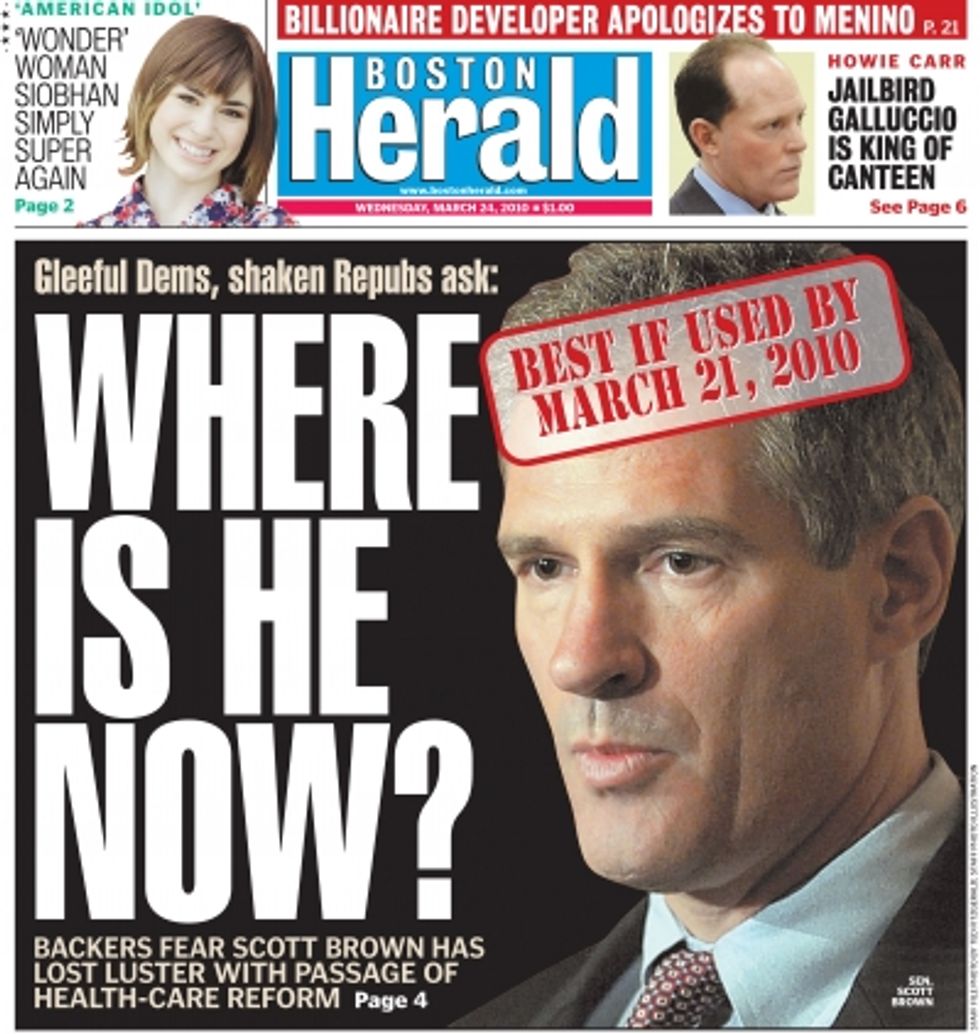 Scott Brown, remember that guy? He was the Naked Senator, the 41st Vote, the 57th state, all the teabagger dreams realized and brought to life in the handsome form of some hairy-bellied Golem from the pages of a 1980s issue ofCosmopolitan. It was as if he drove that dumb mini pickup straight out to Hyannis Port, dug up Ted Kennedy and punched him in the mouth, even though Ted Kennedy is actually buried at Arlington National Cemetery. Oh yeah, and Health Care Reform passed -- it's the law now, in America. Scott Brown didn't do shit.

We here at Wonkette don't even dislike Scott Brown in any particular way. He's an ambitious guy, kind of creepy with the daughters, hokey with that whole Fred Thompson "I drive a truck so I'm not gay like most Republicans" thing, but still a moderate Massachusetts politician who voted for the socialist Romneycare program in that state and kept telling people he wasn't going to vote anybody's party line.

So, on his second U.S. Senate vote, he didn't vote the party line. He went with the Democrats on a very middle-of-the-road Tax Cuts For Businesses Hiring New Workers thing, a piece of legislation about as bipartisan and helpful as you can get during the Great Recessions third calendar year.

And the Teabaggers & Wingnuts & Nobamatards just lost what was left of their minds. YOU DID WHAT? Here is actual video of a Nobamatard reacting to the news that Scott Brown had "gone rogue" in the U.S. Senate:

Now they Hate Scott Brown, and he is nervous and sad. The Boston Herald, the same right-leaning tough-guy tabloid that endorsed and promoted Brown's whole unlikely rise to the Senate, well that newspaper has cold abandoned him. They've put out an entire issue dedicated to saying Scott Brown is finished, done, no mas, back home and forgotten next year when his partial-term abortion ends:

Republican folk hero Sen. Scott Brown is being taunted by triumphant Democrats -- and slammed by irked conservatives -- after the historic health-care bill he was elected to kill was signed into law by President Obama yesterday.

“If he were a milk carton, he would be expired,” said Massachusetts Democratic Party chairman John Walsh.

Brown’s backers from the insurgent Tea Party movement want to know if they’ve been had.

“We start to wonder whether we helped a RINO (Republican in name only) get into office,” said Tea Party activist Jeffrey McQueen, who traveled from Michigan to campaign for Brown in the final days of the Jan. 19 special election that rocked the nation.

Scott Brown, self-proclaimed Goliath of the Republican party and unstoppably popular candidate for reelection in 2012, made no attempt to hide his fear when Massachusetts Democratic Party Chairman John Walsh tweeted “Some are talking about you running vs Scott Brown in '12. I’m Chair of MA Dem Party. My email is johnewalsh@_____."

Who is the "you" being addressed? Nobody knows? So Scott Brown naturally assumed it must be someone who was never mentioned in the message -- a famous teevee news host who happens to live in Massachusetts.

"I am not running against Scott Brown for Senate," Rachel Maddow said Wednesday on her MSNBC teevee show. That is sad, because she would be an awesome candidate, but as Ronald Reagan said, "Facts are stupid things." Anyway, she's not running for Senate. Scott Brown is scared to death of a Twitter that didn't even mention her name or give any description that would lead anyone (sane) to think the Massachusetts Democratic Party chairman was sending a Twitter about Rachel Maddow running against Scott Brown next year.

Poor Scott Brown has had the shortest national career of pretty much any American politician, ever. And he didn't even have to do anything gross like John Edwards always does! [Boston Herald/Death + Taxes]