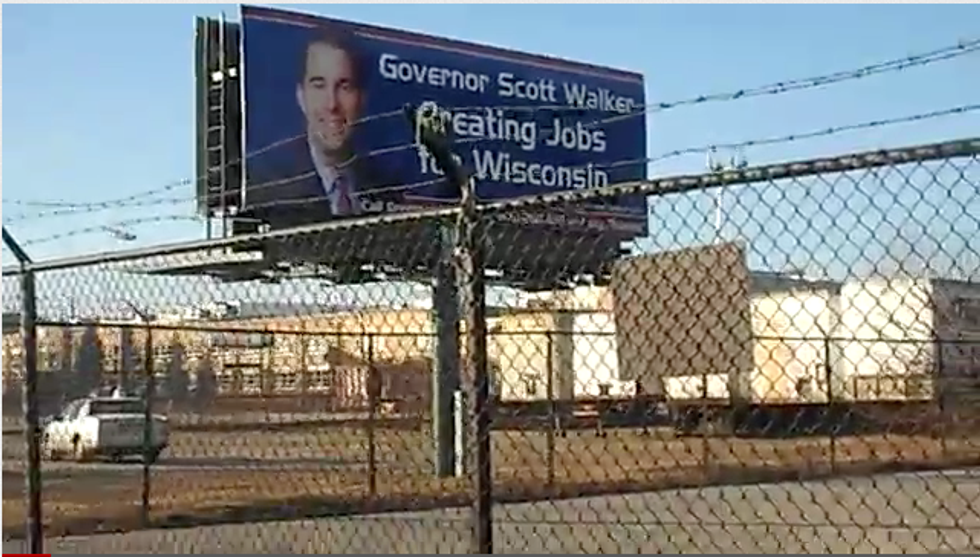 Some unintentional American Heroes of comedy placed one of a series of billboards touting the jerb creation skillz of Wisconsin's Kochgobbler governor Scott Walker directly in front of a shuttered GM factory that sent 10,000 people to the unemployment line. It's such an apt visual, seeing his fat head up there surveying the landscape of other peoples' misery with a weaselly, self-satisfied grin. And how is the whole job creation process going in Wisconsin these days? "In every month since June, the state has lost jobs both overall and in the private sector," according to the federal Bureau of Labor Statistics. Has everyone in Wisconsin remembered to sign the recall Walker petition yet? They're due next week!

The billboard has already come down, boo, after the pro-Walker group that sponsored it heard that the Internet was making fun.

Oh well, it could not really get much worse for Scott Walker anyway, who is so hated in Wisconsin that he's been forced to exile himself from his own state to go beg evil factions in the rest of the country to give him money to support his villainy.

State law allows those targeted for a recall to ignore normal campaign donation limits until the recall election is set. Walker reported raising more than $5 million as of mid-December, with roughly half coming from outside Wisconsin, and has been traveling the country seeking donations. He was in Texas on Thursday speaking at a conservative legislative forum.

Ha ha, shouldn't Texas have to keep Scott Walker, if they are buying him?

Recall organizers will be submitting hundreds of thousands of signatures on the petition deadline next Tuesday, let the fun begin! [Wisconsin Radio Network/ AP]