Scott Walker Dicking Over Everyone In Wisconsin, Will Definitely Run For President Now 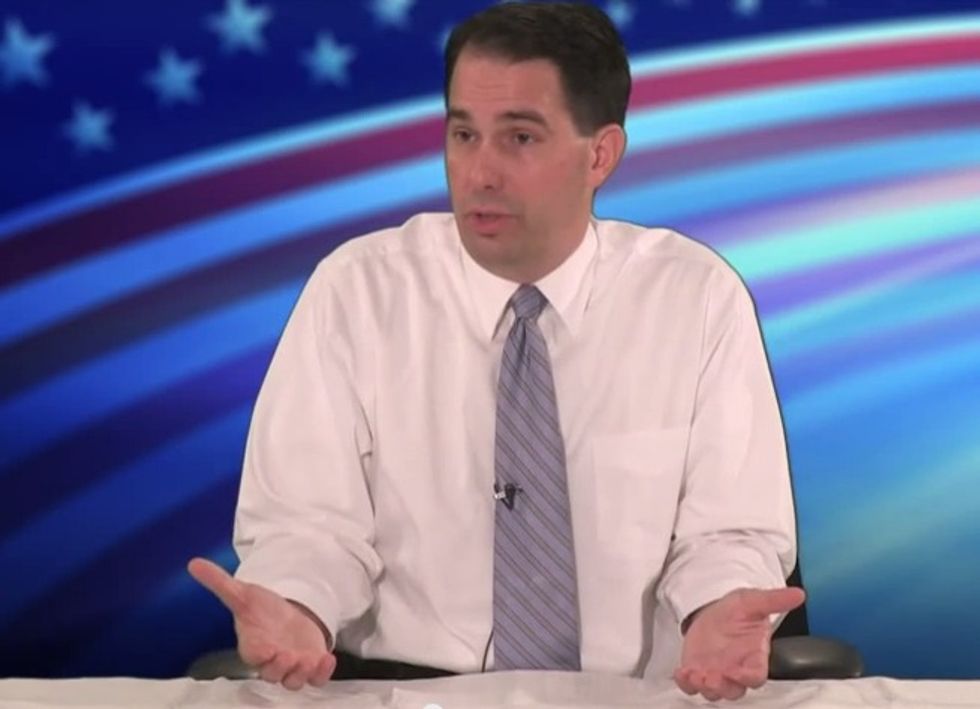 Poop-brained sea monster Scott Walker would very much like to be president of the United States. It’s a heavy lift for a guy who has all the charisma and magnetism of a Styrofoam cup of barley soup left out on a table in a homeless shelter. Scott’s going to have to run on his record of being a total dick to much of the population of his home state of Wisconsin. This week he unveiled his latest state budget, and guess what? Mission accomplished, Scott.

How dickish is Gov. Scott Walker? He’s proposing a funding cut of $300 million for the renowned University of Wisconsin while also cutting the Wisconsin Idea, the system’s guiding purpose and principle since 1904, from the school’s mission statement. Imagine if Obama’s next federal budget cut the language about life, liberty, and the pursuit of happiness from the Declaration of Independence, and you’ll have a pretty good idea about how big a deal this is. Now he's insisting that was "a mistake someone made," even though it's obvious that's exactly what he intended to do.

Walker also wants to add language that makes the university’s first priority “to meet the state’s workforce needs” while cutting language about developing methods to educate people and improve the human condition. Is Walker trying to turn UW into a technical college for his corporate masters, David and Charles Koch? Great idea! Get rid of the Humanities Department and replace it with a program that teaches how to repair oil field equipment using just a lug wrench and your own sense of capitalistic fulfillment.

We have to ask once again: How does this asshole keep winning? Three times in four years, people!

Needless to say, the faculty and administration of UW shit badgers when they heard the news on Wednesday. Walker and his office quickly backtracked, claiming that the language being protested had been left in the budget document due to a drafting error, which is what douche noodles like Walker always say when caught with their dicks out. Well, almost always. Sometimes they claim a "wide stance."

All the screeching over the cutting of the Wisconsin Idea nearly drowned out the fact that the $300 million amounts to a 13% cut in the UW budget for the next two years and nearly half of the states $650 million budget hole. Which has grown over the last few years thanks to Walker slashing tax rates and failing at all that job creation he promised when he was first elected. Basically, he has turned Wisconsin into Kansas, but with a more annoying Midwestern accent.

The screeching also nearly drowned out the noise over another part of Walker’s budget: his proposal to give the NBA’s Milwaukee Bucks $220 million to build a new arena. The money would be raised through bond measures, and backers have made all the usual noises about economic benefits to the local economy, a point that almost never works out in practice. But when you can slash your flagship university’s budget while finding the money to build a stadium that will provide a couple of hundred minimum-wage jobs slinging plastic cups of watery beer to drunken basketball fans for 41 nights a year (we’re assuming no playoff games because come on, it’s the Bucks), you have to do it.

We’ll be keeping a close lazy eye on Scott Walker. He’s just bland enough to fool people into not realizing he doesn’t have the brains that god gave a turnip, but he's got "a thick donor file" of almost 300,000 people, and he's pretty good at raising money and beating Democrats at this point. Which the people of Wisconsin have discovered to their sorrow.