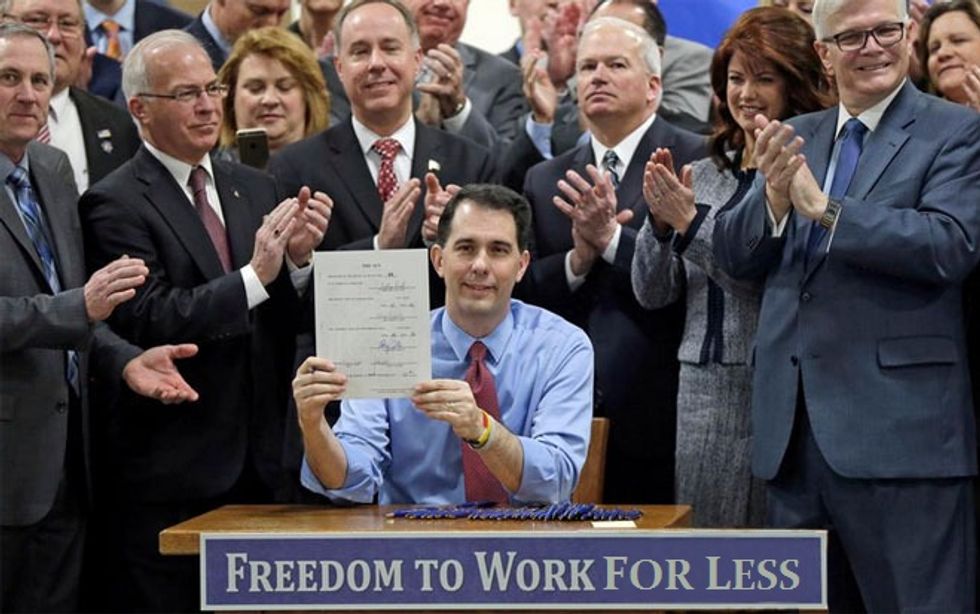 Scott Walker signed a "Right To Work" bill into law Monday, ensuring that employees won't have to submit to oppressive union membership, higher wages, safer workplaces, and job security anymore. Wisconsin is now the 25th state with a right-to-work with fewer rights at work law, and already the new jobs are simply flooding into Wisconsin:

Walker signed the bill at the Milwaukee factory of Badger Meter Inc. in Milwaukee, saying it represented "one more tool" for attracting businesses and investment to the state. With the passage of the law, Badger Meter has said it would start making a new product line at the plant, hiring twelve workers in the coming months with the potential to hire more.

A dozen new jobs! We bet that's worth even more economic impact on the state than thirty pieces of silver!

Walker had claimed repeatedly during the fight over his 2011 law that took away public employee unions' collective bargaining rights that he would never sign legislation that affected private-sector unions, but everybody knew he was lying then, so no real harm done. He had also made specific promises during his 2014 reelection campaign that he would not support right-to-work:

Walker said in September he was "not supporting it in this (2015) session."

"We're not going to do anything with right-to-work," Walker told The New York Times in October.

Walker's fellow Republicans introduced the measure in January, a few weeks after the governor was sworn in for his second term. He said immediately that he would sign the bill if it passed.

Again, everyone knew he was lying, so it seems really unfair to call undue attention to that fact.

Yr Wonkette anticipates that, within the next week, Walker will be touting his signing of "right-to-work" as proof that he's ready to negotiate international agreements, particularly his plan to defeat ISIS by hiring scab counter-jihadis who are willing do blow themselves up for only 36 virgins.