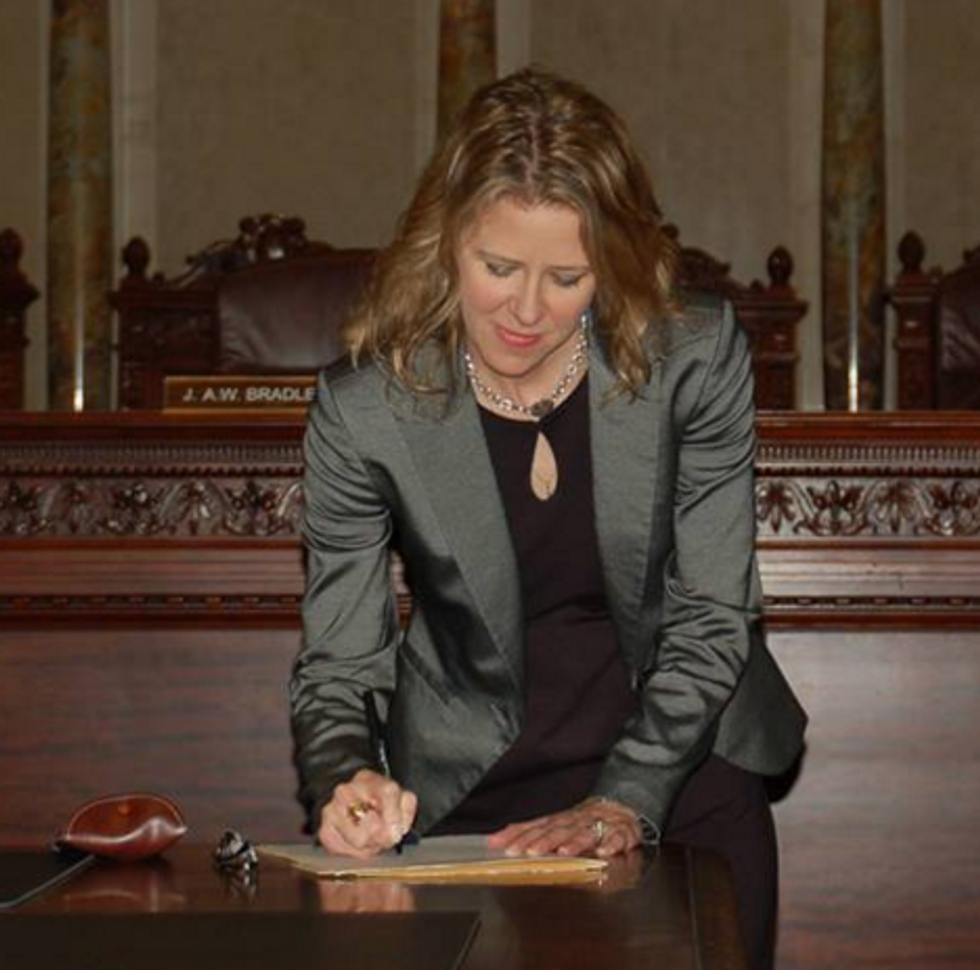 If you're a fan of those sorts of blog posts where we talk a whole bunch of malarkey about somebody, and then at the end say, "She seems nice!" then you are in luck! Wisconsin Gov. Scott Walker (R-Loser) appointed a lady judge named Rebecca Bradley to the state supreme court this past October, and she's now running for a full 10-year term. Walker likes her because she is super conservative, says words like "judicial restraint," and because she was the president of her local chapter of the mega-right-wing Federalist Society. No wonder Walker keeps appointing her -- this is the third time already -- to higher and higher courts in Wisconsin!

Also, when she was a wee college student, she had a whole lot of conniption fits in columns she wrote for the Marquette Tribune about how gross the queers are, how they all deserved to get AIDS, and Bill Clinton was the worst. Here, have a couple of quotes about homosexual AIDS queers, as uncovered by One Wisconsin Now:

"But the homosexuals and drug addicts who do essentially kill themselves and others through their own behavior deservedly receive none of my sympathy."

"I will certainly characterize whomever transferred their infected blood a homosexual or drug-addicted degenerate and a murderer."

What a friendly lady! Also, she wrote this about the 1992 election:

"We have now elected a tree-hugging, baby-killing, pot-smoking, flag-burning, queer-loving, bull-spouting '60s radical socialist adulterer to the highest office in our nation," Bradley wrote of Clinton's election. "Doesn't it make you proud to be an American? We've just had an election which proves the majority of voters are either totally stupid or entirely evil."

Now, she was TRYING to say a mean thing about Bill Clinton and his supporters, so it would be real rude and dickish of us to point out to College Rebecca Bradley that the actual majority of voters in 1992 chose either George H.W. "Poppy" Bush or Ross Perot. So we won't point that out.

Also, we don't want to be those liberal torch-mongers who are all, "LADY SAID A BAD IN COLLEGE," because sometimes people change their minds. After all, Michelle Obama wrote in her college thesis that everybody should kill whitey (fact check: No she didn't), and when Barack Obama was pretending to be in college, he was actually just snorting cocaine off Saul Alinsky's butthole in Indonesiaghanikenyastan (fact check: TRUE. Unless it's not).

Bradley has apologized, saying her bad, she never woulda said all that shit if she wasn't so mad about Queerlover the Bullspouter AKA Bill Clinton:

"I was writing as a very young student, upset about the outcome of that presidential election and I am frankly embarrassed at the content and tone of what I wrote those many years ago," Bradley said in a statement. "To those offended by comments I made as a young college student, I apologize, and assure you that those comments are not reflective of my worldview. These comments have nothing to do with who I am as a person or a jurist, and they have nothing to do with the issues facing the voters of this state."

Well, as long as she says she's sorry. And how does she feel about the homosexuals who kill themselves by boning these days? Well, she won't say whether she's OK with the Supreme Court gay marriage ruling, on the one hand. On the other hand, according to the Milwaukee Journal-Sentinel, her spokesperson said if gay-doers asked her to be the judge for their gay wedding, she would do it. So maybe she's reformed!

Or maybe she'd be all, "I NOW PRONOUNCE YOU TREE-HUGGING, BABY-KILLING, QUEER-LOVING DEGENERATE SOCIALIST AIDS MURDERERS! You may kiss each other on the penis." That would be a very rude way to conclude a gay wedding!

Anyway, this is the end of the post, so you may all commence to saying "She sounds nice!" in the comments, which are not allowed.