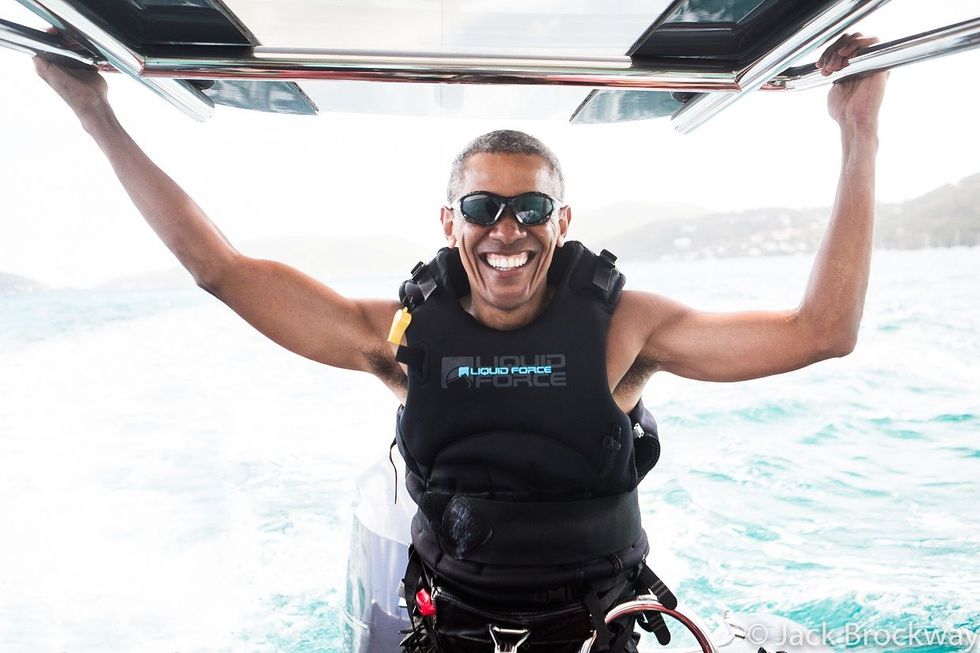 Picture of Barry and his armpits by Jack Brockway from the Virgin website. We hope he is OK with us borrying the picture!

It sure is a drag constantly telling you stories about how "President" Pussgrab is ruining America at lightning speed, so how's about we check in with the real president of America, Barack Obama? He's been doing some nice and well-deserved fucking off since he left office! Bamz and Michelle went to the British Virgin Islands to hang with their pal Richard Branson, and while they were there, Branson challenged Bamz to a KITESURFING CONTEST, which means we have new pictures and video of Bamz being sexxxy and wet. Can you imagine what would happen if we had new wet pictures of Donald Trump to show you? Well, for one thing we'd be makin' some Russian pee hooker jokes!

But enough of that, this is an Obama post, and good lord, do you see that picture above? It is making us gay all over again!

Richard Branson 'splains what he and Barack did together:

One of the first stories Barack told me when he and Michelle arrived on Moskito Island was how, just before he became President, he had been surfing on a dangerous break in Hawaii. When he came in from an exhilarating session, the new head of his security team turned to him and said: “This will be the last time you surf for eight years.” For the next eight years he didn’t have the chance to surf, enjoy watersports or do many of the things he loved.

So it was tremendous to offer him the chance to learn to kitesurf. The sport has really taken off in the past decade and we have the perfect conditions and team to help anyone learn. I have also wanted to learn foilboard surfing. So we decided to set up a friendly challenge: could Barack learn to kitesurf before I learned to foilboard? We agreed to have a final day battle to see who could stay up the longest.

Heh heh, he said "stay up the longest." Anyway, there are lots more pictures at the Virgin website, and more blog post where Branson admits that Barry BEATED HIM IN THE CONTEST, yay Barry! Here's a shot of Branson and President Sexypants being silly and pretending to kill each other, like boys do:

Oh, and there is also video!

Sigh. As hopeful as we are that Obama will be a loud voice of opposition during the Trump regime, we've gotta say that he deserves every damn second of vacation he feels like taking. Bonus points if he shows a bunch of skin on his vacations, because we are a shallow whore.