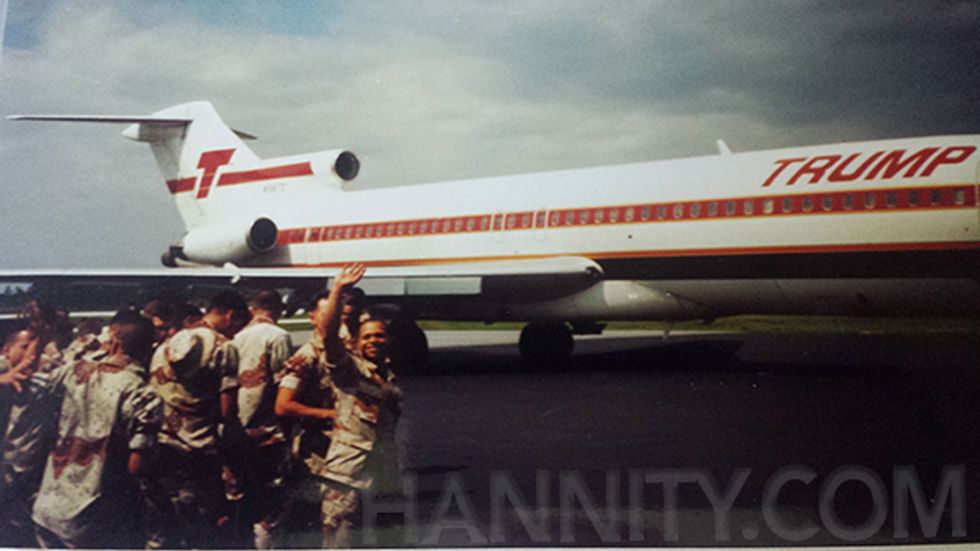 Sometimes a picture's worth a thousand-word debunking

Gosh, that Donald Trump sure does love Our Troops! Did you know that when 200 Marines were stuck in transit on the way back from the Gulf War, Donald Trump sent his very own jet to pick them up and return them to their families? If you read Sean Hannity's website, you'd know all about it -- the story was even confirmed by the Trump campaign! What a humanitarian!

Oh, except BULLSHIT, and also NOPE.

Here's the version of the story on the Hannity website:

When Corporal Ryan Stickney and 200 of his fellow Marines prepared to return to their families after Operation Desert Storm in 1991, a logistics error forced them to turn to a surprising source for a ride home: Donald J. Trump.

In the Hannity version, posted in May, when Stickney's Marine reserve unit returned from deployment in Saudi Arabia, they spent several weeks at Camp Lejeune in North Carolina to decompress before returning home to their base in Miami. Unfortunately, due to a logistical screwup, no planes were available. Thank god, Donald Trump Himself came to the rescue!

"The way the story was told to us was that Mr. Trump found out about it and sent the airline down to take care of us. And that’s all we knew….I remember asking 'Who is Donald Trump?' I truly didn't know anything about him," the former Marine said.

The Trump campaign has confirmed to Hannity.com that Mr. Trump did indeed send his plane to make two trips from North Carolina to Miami, Florida to transport over 200 Gulf War Marines back home. No further details were provided.

The simple act of decency from a billionaire -- with so many small businesses to defraud -- stayed with Stickney forever:

The Marine says he and his family are -- to this day -- grateful for Trump’s kind gesture. "It may not seem like much to most people, but it was very important to a bunch of jar heads and more importantly their families waiting for them on the hot tarmac." [...]

Stickney says that in his 28 years of public service, he has yet to see this kind of support for the troops from any of the other candidates running for president: "I have not seen a Clinton or Sanders plane, or anything else for that matter, sent to support the troops."

Sadly, that sweet story of the billionaire who picked up the phone and said "Get those boys home NOW! Use my jet!" is pure Bravo Sierra. Washington Post fact checker Glenn Kessler confirmed Cpl. Stickney and his unit were somewhat delayed in getting home:

An article in the Sun-Sentinel newspaper on the April 22 homecoming reported that it had been “marred by flight delays,” forcing well-wishers to wait for hours in the sun. The article said the Marines arrived on two flights, one at noon and one after 5 p.m.

But the jet in that photo isn't Donald Trump's personal 727, which only seated 24 and looked like this in the '90s:

The 727 in Stickney's photo is a Trump Shuttle jet, and no, it wasn't sent to Camp Lejeune on Trump's orders, either. Instead, it was there because Trump was losing money like crazy on the Shuttle, and to make matters worse, the airline had too many jets:

when Trump bought the shuttle from Eastern Airlines, he made a bad deal, accepting an additional five planes instead of a lower purchase price...As the Daily Beast noted, in an entertaining account of Trump’s foray into the airline business, “the shuttle needed only 16 planes to operate a full hourly schedule at its three cities, with one or two jets as spares, and extra aircraft are anathema to an airline -- they don’t make money sitting on the ground.”

So some of those extra planes were contracted out to the U.S. military to ferry personnel in the United States during Operations Desert Shield/Storm in 1990-1991. Lt. Gen. Vernon J. Kondra, now retired, was in charge of all military airlift operations. He said that relying on commercial carriers freed up the military cargo aircraft for equipment transport.

Kondra confirmed mothballed Trump Shuttle aircraft were among the leased jets. As for the idea that Trump personally sent a jet to help the stranded grunts, Kondra said it sounded like typical military scuttlebutt: a nice story unmarred by facts:

“I certainly was not aware of that. It does not sound reasonable that it would happen like that. It would not fit in with how we did business,” he told The Fact Checker. “I don’t even know of how he would have known there was a need.”

Plus, Trump was really busy with bankruptcies at the time. Instead, there's a far more likely explanation:

More than likely, given the proximity of the Trump Shuttle to Camp Lejeune, a Trump Shuttle jet was dispatched from LaGuardia to pick up the troops and take them to Florida as part of the contract. The five-hour gap between arrivals in Broward County suggests that one plane was used to go back and forth between North Carolina and Florida.

Kessler adds he had a "pleasant exchange of emails with Stickney, but he chose not to comment for the record after learning the results of our inquiry." Astonishingly, neither the Trump campaign nor Hannity responded to requests for comment. Says Kessler: "Trump Shuttle had a contract with the military, and this flight home was part of that contract. Simple as that."

Sorry, Cpl. Stickney, but the sad news is that you didn't ride on Donald Trump's personal plane, or even one dispatched by him. You saw his name printed on a plane he leased to the Department of Defense months before. At least when Mitt Romney rescued people with his jet ski, he was actually riding the jet ski!

You want to be grateful? Find the Radar O'Reilly -- probably more than one! -- in the Air Mobility Command who took care of whatever logistics hurdle caused the SNAFU, and got a leased 727 sent to you at the right time.

Also, you might want to think about the integrity of a candidate who loudly takes credit for something he didn't have anything to do with.